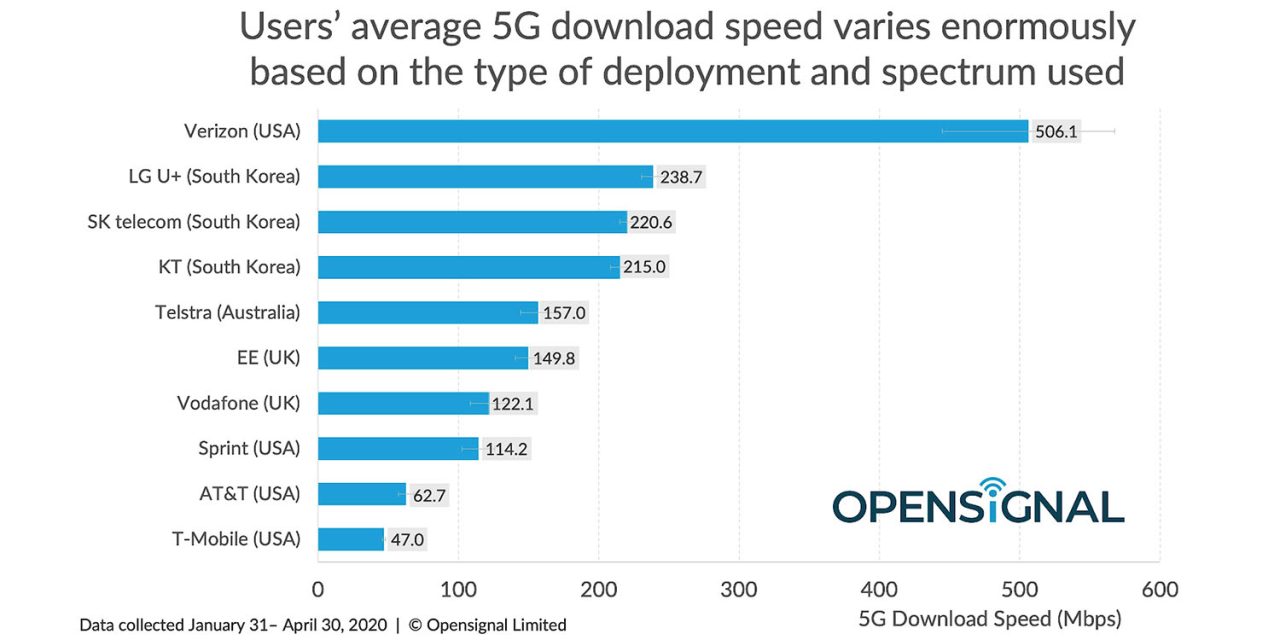 The OpenSignal report says that your chances of getting a 5G signal, and the speeds you are likely to see when you do, vary tremendously by carrier.

On Verizon, for example, its use of mmWave 5G means you’ll see the highest download speeds. Not quite the theoretical maximum of around a gigabit, but a little over half that, at 506Mbps. However, the extremely short range of mmWave 5G signals mean that you’ll actually connect to it less than 1% of the time.

It’s the opposite extreme with T-Mobile, which supports the slower 600MHz standard. Here, the speed is the slowest of the carriers tested, at just 47Mbps – which you might, on a good day, already see on an LTE network. But you’ll connect to 5G almost 20% of the time.

We’ve looked at how the 5G experience compares in four leading countries — Australia, South Korea, the U.S. and the U.K. — across ten 5G operators that all launched 5G well over six months ago […]

In Opensignal’s latest 5G analysis we found all ten operators saw much faster speeds for their users on 5G compared with 4G, with speeds between 18.4 times and 1.7 times faster on 5G. However, average 5G download speeds also varied widely, ranging between 506.1 Mbps on Verizon down to 47 Mbps on T-Mobile US.

The time that users spent connected to 5G — 5G Availability — also varied greatly between operators, reaching a high of 19.8% of the time on T-Mobile US [compared to 0.5% on Verizon].

When we’ll experience 5G speeds on an iPhone is as yet unclear. While Apple traditionally launches its flagship iPhones each September, the iPhone X wasn’t available until November, and there have been conflicting reports about the impact of the coronavirus crisis on this year’s models.

A Bloomberg report in March said that iPhone 12 production was on schedule. A Nikkei report said that Apple was considering a delay. Apple suppliers disputed a key claim in that report and said they could see no sign of delay. A Kuo report suggested a staggered launch across September and October. And most recently, a WSJ report said Apple was about a month behind schedule.