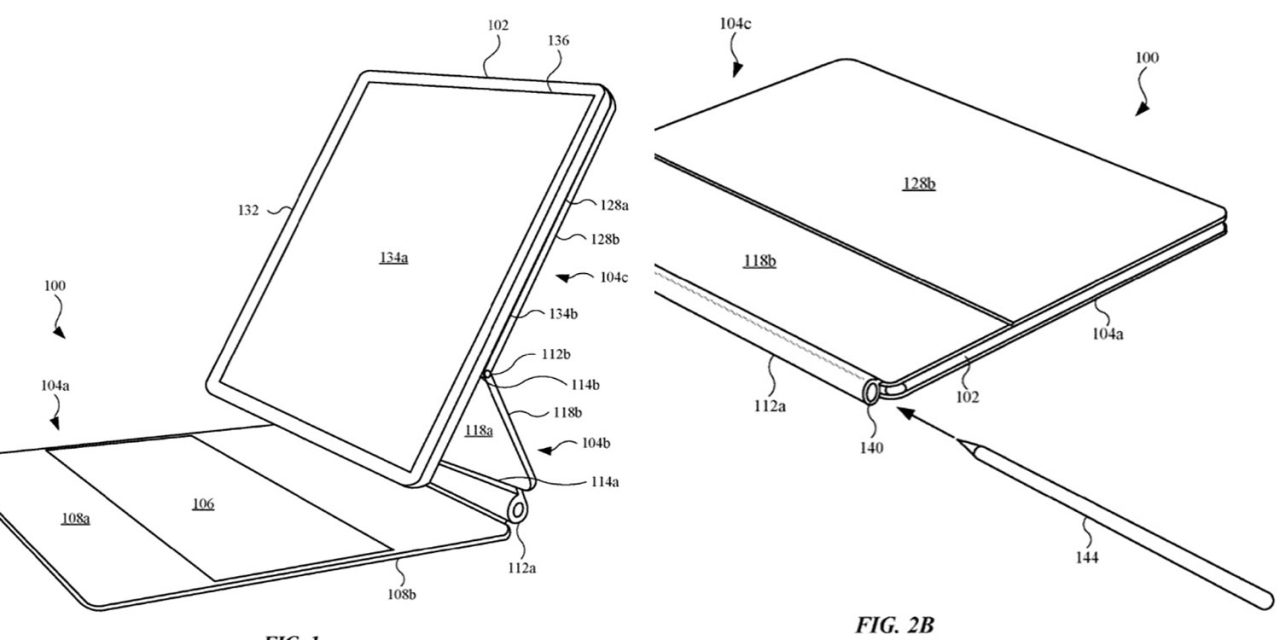 The patent has the innocuous title ‘Accessories for portable electronic devices,’ and an equally uninformative summary.

However, the illustrations are clearly recognizable as the Magic Keyboard for the iPad Pro.

The idea of housing ‘a stylus or pen’ in the hinge is mentioned twice.

The folio of claim 3, wherein the first hinge assembly comprises a hollow body capable of capturing and retaining a stylus or a pen […]

Accessory articles in accordance with some embodiments described herein can also include other mechanical or electronic features that provide additional benefits to the portable electronic devices. As non-limiting examples, first, a hinge assembly of an accessory article can have an elongated hollow body that can serve as a retainer to receive a digital pen such as a stylus or another interactive tool that can be used with the portable electronic device.

Patently Apple suggests this is a ‘future twist’ which ‘reveals possible next-gen improvements.’ While this can’t be ruled out, my guess is this was an idea Apple played with at some point during development, but gave up on it as impractical.

The diameter of the main hinge is slightly larger than that of the second-gen Apple Pencil, so theoretically would have space to accommodate it, but that would then not leave room for the hinge mechanism itself. It’s hard to see how the Pencil could slot into this space without making the hinge significantly bigger, which would look rather clunky.

Although the patent for the iPad Magic Keyboard was only published today, it was filed back in August 2017, showing that Apple has been working on this for quite some time.