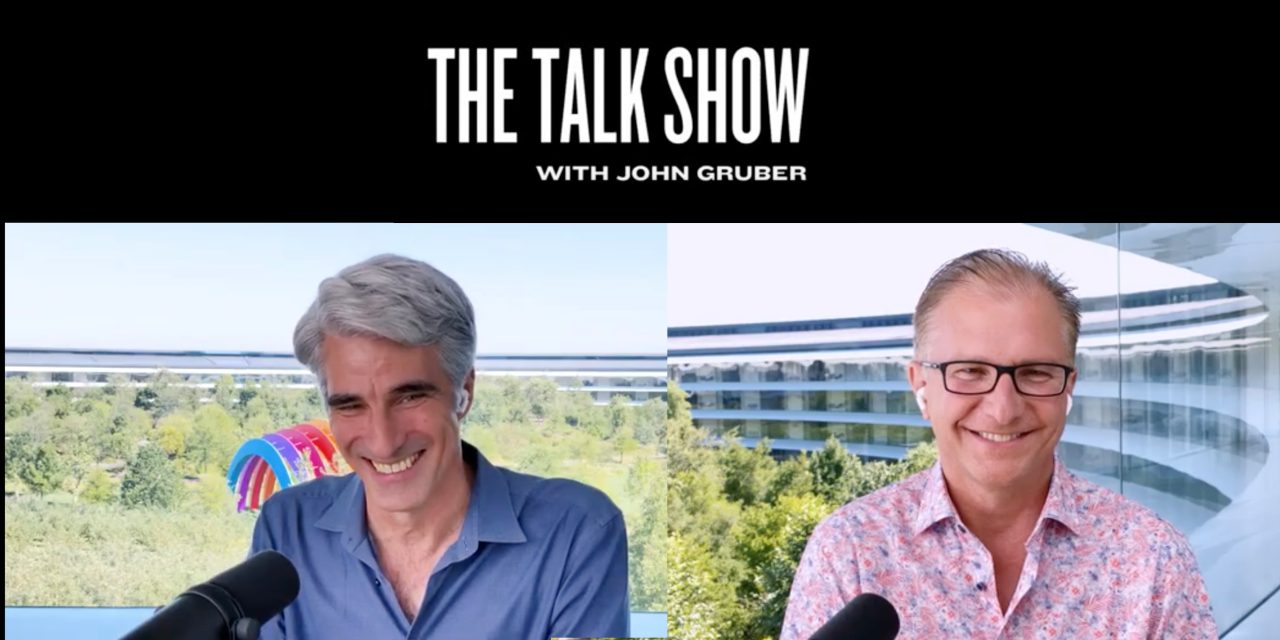 Traditionally at WWDC, Apple blogger John Gruber hosts a live edition of the Talk Show podcast, usually featuring one or more Apple executives for an interview on the week’s announcements. Obviously, an in-person wasn’t possible this year. Instead, Apple SVP Craig Federighi and Greg Joswiak join John Gruber for a video conversation.

Topics include the transition from Intel CPUs to Apple SoC’s for future Macs, the new macOS Big Sur visual design, SwiftUI, and more.

The conversation addresses Apple’s commitment to the Mac as a standalone platform with major investments this year with a new architecture roadmap and a whole new UI for users. Joswiak said Apple leads the industry in customer satisfaction with both the Mac and the iPad, and there is no reason to merge them.

Gruber addresses the state of Mac Catalyst, and how the Catalyst apps on the Mac to date have been unsatisfactory. Federighi describes the project as a ‘major multiyear initiative’ and points to the improvements introduced in Big Sur which allow developers to use native Mac interface controls, at native resolution, in macOS Big Sur.

Craig Federighi says Apple is really putting Catalyst to the test with the new Messages and Maps apps, which are powered by Catalyst. Federighi says ‘we aren’t done’ but we are turning the corner this year and the 2020 improvements will squarely address the community’s skepticism.

Gruber asks what developers are meant to adopt as far as application framework, with UIKit, AppKit, Catalyst and SwiftUI all competing for attention. Federighi says if he was a new developer coming out of a college making a new app today, he would use Swift and SwiftUI.

Why has Apple made the leap to macOS 11 this year? Federighi says the transition to Apple Silicon and the biggest design refresh make for a symbolic moment in the Mac’s history.

Federighi says people will find the Mac runs awfully nice on the Developer Transition Kit hardware: “it gives a sense of what our silicon team can do when they are not even trying”. At WWDC, Apple announced that the first Apple Silicon Mac will be released before the end of the year, and the company aims to complete the transition within two years.

Gruber asks about the lack of Boot Camp on ARM Silicon Macs. Federighi says that Boot Camp will not be offered, but hints at possible virtualization features for running Windows on these machines, reflecting the same vague messaging that Microsoft is providing on the subject.

Regarding iOS 14, Federighi notes that the App Library can actually become the default destination for new app downloads. If a user has edited their home screen to hide pages, new apps downloaded from the App Store will only go to the App Library.

You can watch the podcast in full here: