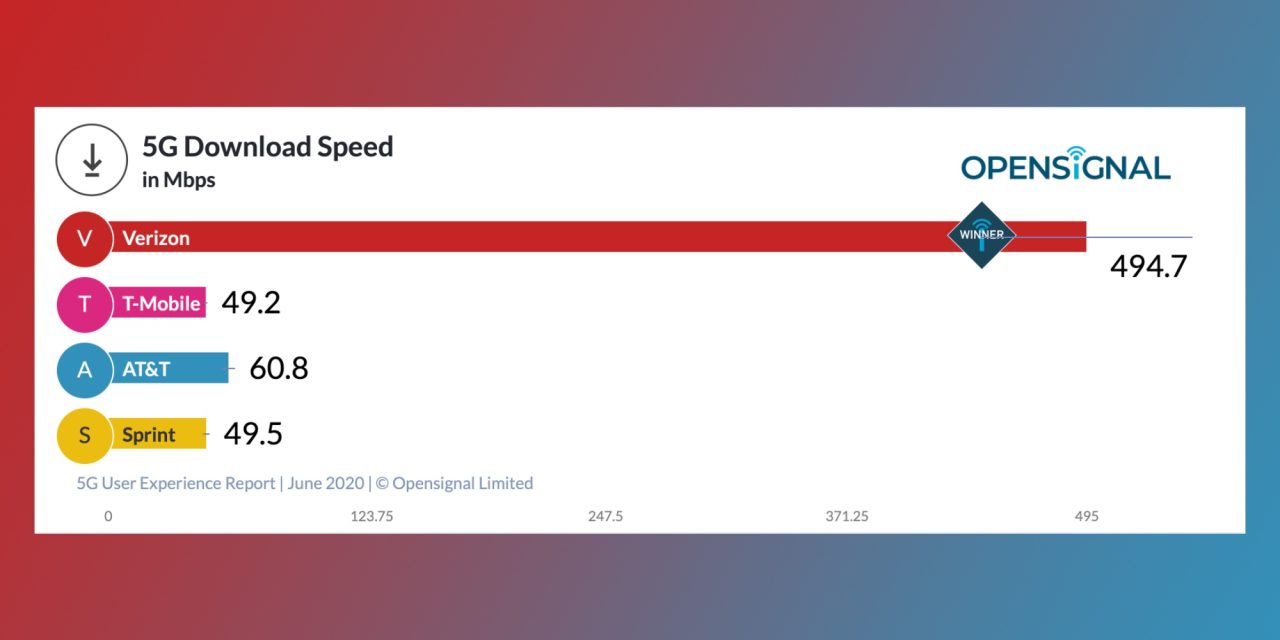 Ahead of the iPhone 12 lineup debuting this fall with 5G support, Opensignal is out with a report on the major US carriers’ 5G performance. Leading by a big margin for average 5G speed is Verizon, but T-Mobile handily won 1st place for availability. Read on for a break down of where US carriers are at with rolling out 5G.

Deploying 5G service in the US is definitely still in the early stages but all of the major US carriers have begun the process in select cities.

The important thing to keep in mind is that Verizon so far has been rolling out mmWave 5G while AT&T, T-Mobile, and Sprint have been using mostly low and mid-spectrum band 5G. What that means is Verizon 5G is much faster at the moment but the range and availability are really limited. Conversely, T-Mobile and AT&T’s 5G average speeds on the low and mid-band frequencies are more similar to good 4G connections but have better range and availability.

The results below came from 2.4 million devices and almost 16 billion measurements between March and June of this year.

With that in mind, here’s how things shook out in Opensignal’s testing:

This is the average speed each carrier offered for specifically 5G connections. Verizon gave an impressive 494.7 Mbps average while T-Mobile, AT&T, and Sprint offered on average just 10% of that.

However, here’s the flipside…

T-Mobile’s 5G availability was much better than any other carrier with 5G users able to actually use a 5G connection 22.5% of the time. Coming in last, Verizon 5G users were able to use the new connection less than 0.5% of the time.

With that in mind, Opensignal put together a helpful metric that paints a more clear picture of what actual daily performance is like. This metric considers the average speeds based on 3G/4G/5G connections since 5G availability is mostly rare at this point.

So while Verizon’s almost 500Mbps average 5G speeds sound impressive, they’re available so little of the time that Verizon’s average ends up tying (just below) AT&T at 41 and 42.6 Mbps, respectively. T-Mobile came in third with an average of 33.7Mbps.

Are you looking forward to picking up an iPhone 12 with 5G support? Or are you not convinced it will matter a whole lot until carriers expand their coverage for the next-gen connection? Share your thoughts in the comments below!