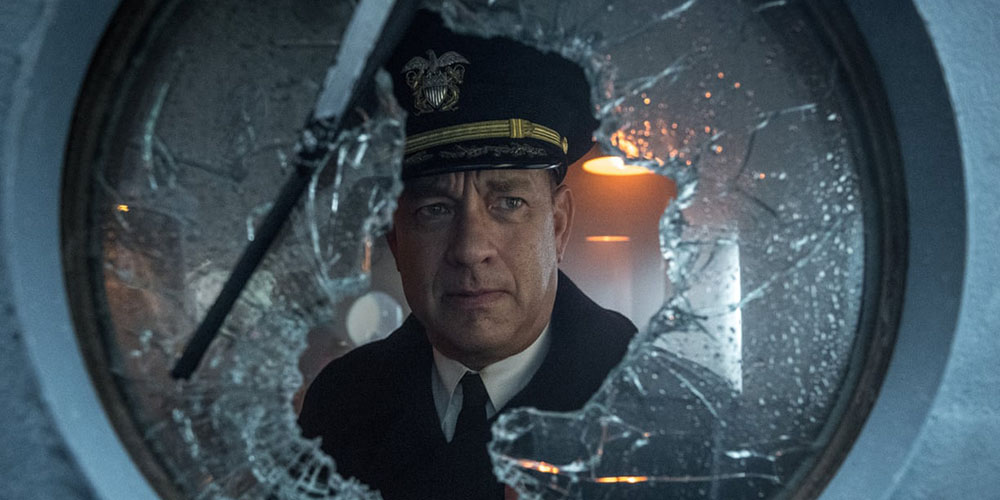 Update: Hanks has now made a follow-up statement, added at the bottom.

Actor Tom Hanks has said that it’s “an absolute heartbreak” that his new war movie, Greyhound, is appearing on Apple TV+ instead of in movie theaters …

He made the comment in an interview with the Guardian.

Hanks and I are talking through screens, and he is promoting a film that will be streamed on Apple TV+ instead of released in cinemas. Greyhound tells the story of Capt Ernie Krause (Hanks, natch) on his first wartime mission in the Battle of the Atlantic […]

Hanks doesn’t just star in Greyhound, he also produced it and wrote the screenplay, adapting it from C S Forester’s novel The Good Shepherd. “My ego has run rampant, Hadley, and it’s all over the picture!” he hoots. Hanks has written films before – the 1996 paean to 60s bands, That Thing You Do!, and 2011’s Larry Crowne. But Greyhound has been an especial labour of love for him, one he sweated over for almost a decade, and it is one of those sweeping war movies that really should be seen on the big screen. So the change in plans has been, he says, “an absolute heartbreak. I don’t mean to make angry my Apple overlords, but there is a difference in picture and sound quality.”

Apple apparently also dictated where in his office Hanks had to sit for the videoconference interview.

Apple TV+ is having a similarly negative impact on Hanks’ appearance in this interview. Even though he is in his office, “the cruel whipmasters at Apple” decided the background needed to be a blank wall, presumably so nosy journalists like me wouldn’t spend the whole encounter snooping at Hanks’ bookcases. Against the eerily empty backdrop, he looks, Hanks rightly says, as if he’s in “a witness protection programme. But here I am, bowing to the needs of Apple TV.”

Here’s what Apple says about the movie:

Inspired by real events, Captain Ernest Krause (Tom Hanks) leads an international convoy of 37 ships on a treacherous mission across The Atlantic to deliver thousands of soldiers and much-needed supplies to Allied forces. Stephen Graham, Rob Morgan, and Elisabeth Shue star alongside Hanks. The Apple Original film was directed by Aaron Schneider and produced by Gary Goetzman.

You can watch the trailer below, and the film will be available on Apple TV+ from July 10.

“I’m actually thrilled that Apple TV+ is making it possible for everybody to see it… This is a magnificent gift that’s come to us because of Apple because COVID-19 did something heartbreaking to us all: it closed down the theaters. We don’t have the cinema.

There isn’t anybody that doesn’t like going to see a good movie with 800 people and coming out with something in common. Barring that, Apple has saved the day for us. We had a magnificent movie that was not going to be seen.

Apple is a benevolent streaming service in every way.  It’s going to look fantastic but it’s going to be available. It is going to be viewable, and otherwise we would’ve languished in a vault for a movie that is 88 minutes of a thematic story that does speak to what we’re all going through right now.

We didn’t know that at the time we made the film, we were just trying to make a lean, new spare version about procedures and behaviors about how difficult it was to stay alive in the North Atlantic in 1942. It’s a magnificent deal and we are going to be able to fill up the screens in the living rooms and the bean-bag chairs of the world all in one fall shot, so we feel as though we were rescued at sea by a convoy with a big Apple logo with a bite taken out of it.”