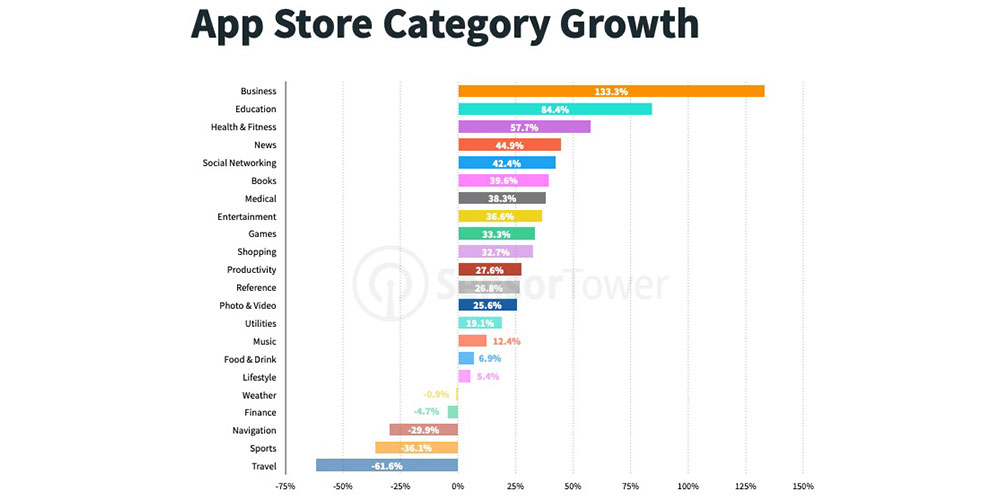 Demand for the videoconferencing app was of course driven by the coronavirus crisis, which saw record numbers of people working from home. Worldwide, across Apple’s App Store and the Google Play store, Zoom became only the third app to reach 300M downloads in a quarter, joining TikTok and Pokémon GO.

Sensor Tower says Zoom wasn’t the only app to benefit …

The spread of COVID-19 made a dramatic impact on the app landscape. Business, Health & Fitness, and Education apps continued to thrive in Q2 2020, while Travel, Navigation, and Sports apps worked to recover from extended periods of low installs […]

The top 10 iOS apps worldwide were:

Both Zoom and Teams saw massive increases in usage as corporate communication tools, as videoconferences from home replaced in-office meetings – but Zoom also took off in a huge way as the default consumer video app during lockdown. Ease of use saw its widespread adoption despite security problems along the way.

DoorDash had three straight quarters of declining downloads in the U.S. between Q2 and Q4 2019. Food delivery bounced back as restaurants were closed due to the coronavirus, and DoorDash achieved a new high in downloads during Q2 2020.

There were no surprises in which categories of apps did well, and which didn’t.

Meanwhile, Sports, Navigation, and Travel apps struggled in the post-COVID world. Uber and Lyft both saw a precipitous decline in U.S. downloads in early March as the coronavirus began to spread.

Not quite an App Store record, but also notable was huge growth in app downloads in the US, which saw the country overtake China for the first time in six years.

The U.S. surpassed China for the first time since 2014 with more than 2.2 billion installs. It had 27.4 percent year-over-year growth in 2Q20 compared to just 2.1 percent Y/Y growth for China.