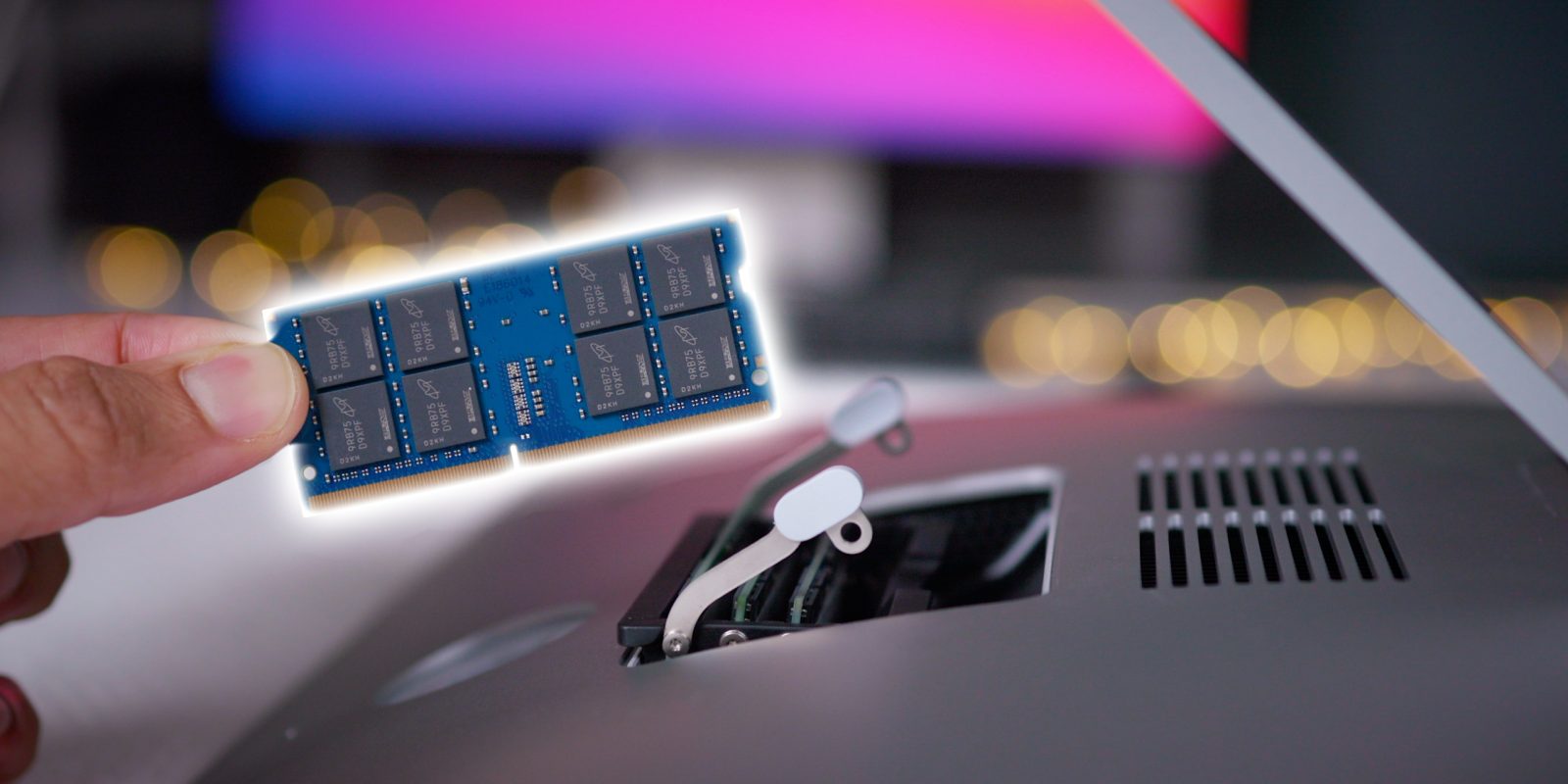 This past week Apple released what could be the swan song for the current design of the 27-inch iMac. With Apple Silicon-based Macs on the horizon, it’s possible that we’ve seen the last of the current iMac’s design, and with it the end of user-accessible memory that makes it easy to upgrade iMac (2020) RAM.

The current 5K iMac design is unique, because it’s the only Mac machine that Apple sells outside of the $6000 Mac Pro that features user-upgradable memory. Thanks to a special door just above the power socket on the rear of the 27-inch iMac, users can quickly gain access to the machine’s four SO-DIMM slots to upgrade the RAM.

Not even the iMac Pro provides users with such a cost-saving luxury, which makes the 5K iMac a value-packed machine. And with the 2020 iMac now officially supporting 128GB of RAM in build-to-order configurations, users can purchase third-party RAM and save lots of money, up to $2000. Watch our hands-on step-by-step tutorial for the details, and be sure to subscribe to 9to5Mac on YouTube for more iMac content.

For the first time, Apple is allowing iMac users, even those who purchase the base model $1,799 configuration, to upgrade to a massive 128GB of RAM [side note, last year’s 5K iMac could support 128GB as well, but unofficially]. As has long been the case, however, Apple charges an exorbitant amount of money for memory upgrades, and the iMac (2020) is no exception to this longstanding trend.

By default all iMac configurations come with at least 8GB of DDR4 2666MHz memory. 8GB memory configurations arrive via two 4GB SO-DIMM modules installed in two of the four SO-DIMM slots housed in the rear of the 27-inch iMac chassis.

How much can you save?

Here is a comparison of what Apple charges, versus the price you’ll generally pay for like memory modules via a third-party. Third-party prices have been rounded and are estimates. Keep in mind that memory prices may fluctuate a bit here and there. As you can see, users opting for the 128GB configuration stand to save some serious coin, but even if you opt for a 32 or 64GB upgrade, you still stand to save hundreds of dollars.

Before proceeding with this tutorial, you’ll need to acquire the appropriate memory modules. Apple uses DDR4 2666MHz SO-DIMMs, so you’ll want to make sure that the RAM you purchase is of this type.

I recommend purchasing OWC RAM, as I’ve used it in some of my Mac mini upgrades, Mac Pro upgrades, and iMac upgrades, and have always had good success with them. However, I’ve also used memory from companies like Crucial, Nemix, and others with no issues. Again, the main thing is to make sure that you purchase the right type of memory — DDR4 2666MHz SO-DIMM modules. If you do that, you should be golden.

You may also want to keep in mind future RAM upgrades. For example, if you only need to upgrade to 64GB of memory now, but think you may want to upgrade to the maximum 128GB amount in the future, then you’ll want to go for a 2 x 32GB setup. This will leave two SO-DIMM slots available to add two additional 32GB modules later on down the line. While a 4 x 16GB setup will also provide you with 64GB of RAM, it maxes out your available SO-DIMM slots, which complicates future upgrade ability.

Okay, now that we’ve got those housekeeping items out of the way, let’s upgrade iMac (2020) RAM.

Step 1: Shut down, and unplug all of the cables from the 27-inch 5K iMac, including the power cable.

Step 2: Place a few towels on a flat surface. Make sure the towels are thick enough and cover a large enough area to accommodate the 27-inch display.

Step 3: Gently place the 5K iMac down on the towels, with the display face down so that the rear of the machine is easily accessible. Ensure that you have enough working space.

Step 5: If you bought four SO-DIMM replacement modules, such as in this example when installing 4 x 32GB for a total of 128GB of RAM, you’ll need to remove all of the existing modules. If you purchased just two memory modules, you can keep the existing pair installed if you’d like, but take note of the order that you should install mixed sized memory in the video walkthrough above.

Depending on your 5K iMac configuration, there may be two or more SO-DIMM slots in use. If you opted for just 8GB of RAM, there will be 2 x 4GB SO-DIMM modules. Push the levers out to the edges of the iMac to unlock each of the SO-DIMM slots, and lift up each SO-DIMM module to remove it.

You’ll want to hang on to the RAM modules that you remove in case you ever want to sell your iMac with the original RAM, or if you ever need your iMac serviced by Apple.

Step 6: If you’re only using two RAM modules, such as a 64GB (32GB x 2) config, install the modules in pairs in order to take advantage of dual channel memory. In this case, you’ll want to install each pair of RAM modules in slot 2 and slot 4, or slot 1 and slot 3. This is how Apple’s 8GB of RAM comes installed from the factory.

If you’re using four memory modules that are all the same, just install all four in the available SO-DIMM slots. If using pairs of mismatched memory sizes, things get a little strange. If installing mismatched pairs of memory, I find that installing a pair in slot 2 and slot 4, and another pair in slot 1 and slot 3 resulted in degraded performance. Notice how the memory speed drops down to 2133MHz in this scenario.

Be sure to insert all of the new modules with the notch facing to the left. Push each module straight down firmly into the slot so that it snaps into place. Double check to make sure the modules are installed correctly, and that the levers are locked back into place.

Step 7: Reinstall the RAM door by simply pressing it into place. The RAM door is secured via friction, so you’ll need to press firmly to reinstall it.

Step 8: Move your iMac back to your working area, connect all cables along with the power cable, and turn the machine back on. Don’t be alarmed if you see a black screen for an extended period — this indicates that the new memory is being initialized.

Step 9: Once macOS is back to the desktop, go to  → About This Mac → Memory, and ensure that all of the installed memory is being accounted for and running at the right speed. If not, you’ll need to go back and ensure the memory is properly and firmly installed into the SO-DIMM slots.

Upgrading your system memory will add a lot more headroom to work with multiple demanding applications at once. It can especially be beneficial when working with pro-oriented applications like Final Cut Pro X, Logic Pro X, ScreenFlow, Affinity Photo, Adobe Creative Cloud, and the list goes on. Among other things, memory starved machines will need to write to disk more often, which may slow down your computer, sometimes to an outright crawl.

But besides that, upgrading your memory can have CPU performance implications as well.

It’s not a massive improvement, but upgrading from the stock 8GB of RAM will improve CPU performance.

Easily-upgradeable memory is one of the things that has made the 27-inch iMac the best value in the entire Mac lineup over the years. Not only do you get a high-quality 5K display, but you can save thousands on RAM as well. The 5K iMac is a great value-conscious machine, and it’s had a great run.

The reality is, though, that this may very well be the last significant update to the 5K iMac in this current design. With Apple moving to its own silicon for Macs, it’s highly likely that the next iMac iteration will be sporting Apple silicon under the hood, along with a whole new modern redesign.

While a redesign is much needed, it’s a little bit bittersweet, because I think the likelihood that we’ll see user-accessible RAM in future versions of the iMac is slim. I just don’t see Apple designing a whole new chassis and keeping around the ability for users to add their own RAM after the fact, especially with the iMac moving to an in-house CPU.

With that being said, if you plan on purchasing the 2020 iMac, be sure to take advantage of this wonderful ability. I think it’s downright ludicrous how much Apple charges for RAM, but I have to give them credit for at least giving users a choice in the case of the 5K iMac.

At any rate, I always recommend configuring the absolute minimum amount of memory for the 5K iMac during the build process with the thought of upgrading yourself, and putting the saved dollars towards other upgrades. For example, adding more flash storage, upgrading the CPU, or adding a better GPU. These are all things that you generally cannot change as easily as RAM, and your money is better spent in these areas.

What do you think? Are you considering a 5K iMac purchase? Do you think Apple’s future iMac machines will retain the RAM door for user-accessible memory? Sound off down below in the comments with your thoughts on the matter.