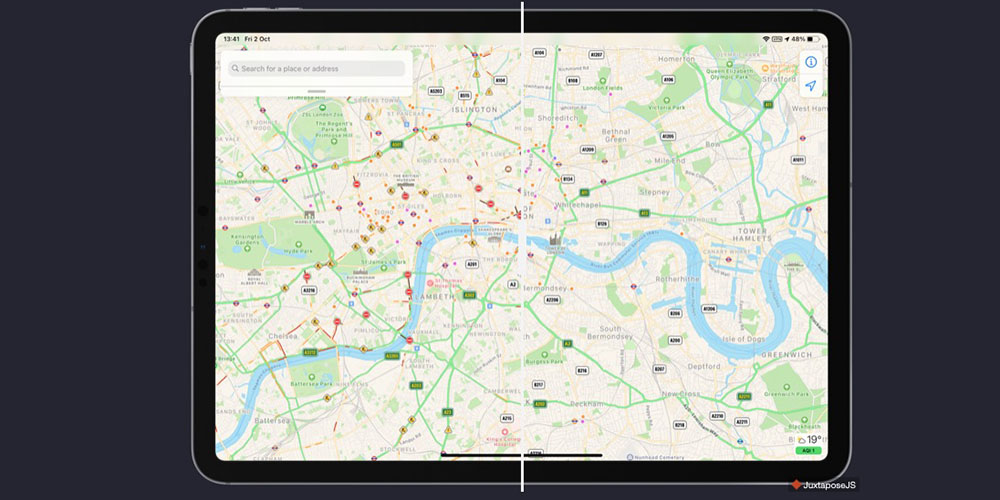 We noted last week that Apple Maps London coverage has been significantly improved as part of a shift to the company using its own UK mapping data sourced from both satellite imagery and Apple Maps cars.

A Londoner has now put together some slide-over comparisons, highlighting some specific changes …

When the new Maps project launched in the US last year, Apple said bringing the map data in-house would allow the company to make the map more accurate and more responsive to changes in the real world.

Today, Apple announced that Look Around is available in three cities across the UK & Ireland: London, Edinburgh and Dublin.

Jonathan Reed has now written a piece looking in more detail at some of the changes, complete with slide-over before-and-after comparisons in London and other cities.

I’ve lived here for over 11 years, so I know it reasonably well. What’s interesting here (and in all of the maps) is how Apple has refined the widths of the road veins based on the size or significance of the road. For simple navigation, this is great for working out whether you’re going to hit a busy through road or a one-way side street. What’s also noticeable is the prominence of roadwork signs and closures. This, along with much more visibility of traffic lights and speed cameras, shows how keen Apple is for you to use their maps for your driving directions.

In particular, you can see from the example above that road closures are now massively more prominent. This is crucial, as London has responded to the coronavirus crisis by closing a number of roads to motorised traffic in order to create safer and more pleasant cycling and walking routes.

More green areas are shown, and parks, lakes, and rivers have significantly more accurate shapes. Previously they were more indicative than specific in their shapes.

Reed notes that although Apple has added some cycle routes to London, these are rather sparse and not particularly direct.

I get around London pretty much 90% of the time on my bike. If you don’t know the city too well, it can be intimidating to know which routes to take while also avoiding heavy traffic and angry drivers. Apple is trying to follow in the footsteps of Google and CityMapper in providing great cycle routes when you’re out and about on your bike. The results are… mixed.

One issue is options. On the example below, which is a route I used to make when working in west London, there is literally one option. For a journey that goes from one side of town to the other, this isn’t great. It does try to take you immediately onto the cycle highway, which is fine. Still, not everyone likes that (me) and it would be good to have alternatives that go down quiet roads, avoiding all the massive pollution of the main roads (where the cycle highway is, along the Thames). It gets the last section bang on though by taking you through Hyde Park.

I looked at several routes, and the general issue seems to be that the routes are very automated, if that’s the word. They mainly aim to get you onto a cycle highway as quickly as possible, and while they often seem to avoid main roads, they frequently miss opportunities to take short cuts and quieter side roads. This is the sort of thing you only learn from cycling around the city regularly, but it is something that Google Maps and CityMapper frequently manage to achieve.

Having looked at a few routes myself, I agree that Apple Maps works hard to get you onto fully segregated cycle paths as quickly as possible. Personally, however, I think this is reasonable. Newer cyclists tend to be scared of London traffic, and strongly favor segregated paths. More experienced London cyclists will have their own routes for regular journeys, and be able to look at a suggestion for an unfamiliar route and figure out their own variation.

Additionally, back-road routes can be very complicated due to the mass of one-way roads in London. Experienced cyclists tend to rely on having lots of known landmarks and main roads, so if you know the direction in which you need to go, and have known main roads to act as ‘boundaries,’ it’s easy to find your way through backroads without worrying about the exact route in advance. New cyclists without those reference points would struggle much more, even with Apple Watch wrist-taps to help.

I do, though, agree with Reed that Apple Maps Look Around is smoother than Street View.

There isn’t a lot of difference but moving around in Look Around feels much more natural. The transitions as you move down the street use some sort of intelligent 3D modeling to make it feel like you’re actually there. It’s impressive and definitely puts the feature above Google’s.

Check out Reed’s full look at the Apple Maps London coverage, as well as that for other cities.