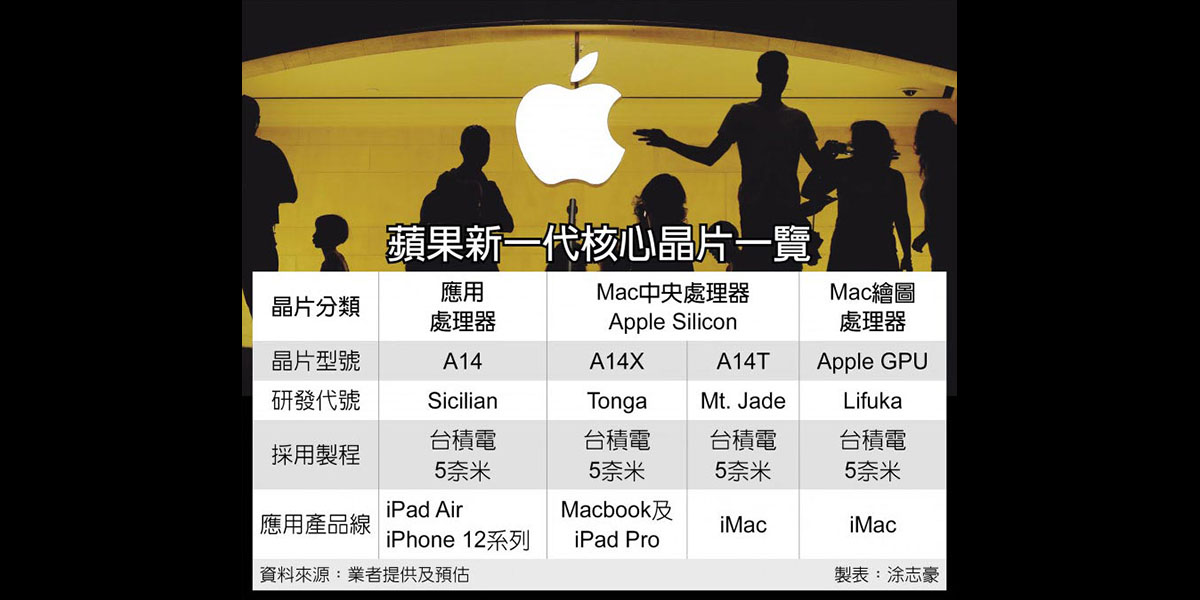 A Chinese-language newspaper has posted what it claims is the chip roadmap for the first Apple Silicon Macs, citing supply-chain sources to suggest three versions of the A14 chip.

The report says that there will be three variants of the A14 processor so far seen in the iPad Air and iPhone 12, two of which will power Apple Silicon Macs …

The first element suggested by Taiwan’s China Times doesn’t require much insight: an A14X chip to power both the next iPad Pro and also a MacBook. It has previously been speculated that this would be a new 12-inch MacBook, the more power-efficient chip providing a 15-20 hour battery life.

It says this would be followed by an A14T variant, which would be used in an Apple Silicon iMac. It also suggests that the iMac would get a new Apple GPU, code-named Lifuka.

The upcoming Arm-based Macbook released in November will use a self-developed A14X processor.

In addition to the first Apple Silicon processor A14X used in MacBooks that has been mass-produced by TSMC 5nm, according to Apple’s supply chain news, Apple will launch the first self-developed GPU – codenamed Lifuka – next year. The first desktop computer processor A14T – codenamed Mt Jade – will be produced in the first half of next year.

Apple itself has hinted that we can expect the A14 chip to be ‘reused elsewhere.’

“Ultimately, we want to make sure that when we build a CPU for one generation, we’re not building it necessarily only for one,” he said. While that doesn’t mean you’ll see the A14’s six-core CPU in something like an Apple Watch, the architecture developed for the company’s flagship phone chipset may well be adapted and reused elsewhere. And as it turns out, we might not have to wait very long before to see a great example.

Today’s report says the same approach will be adopted next year: an A15, A15X and A15T.

Apple has historically offered integrated GPUs in lower-end Macs, and discrete GPUs in more powerful models. There has been a suggestion that this approach will continue with Apple Silicon Macs, and that Apple might be able to provide impressive graphics performance from integrated GPUs.

A Bloomberg report back in September, re-iterated earlier this month, indicated that the first Apple Silicon Macs will be launched at a November event. Following the September and October events, this now seems a safe bet. One potential date suggested for the event is November 17.

Regulatory filings spotted earlier this month indicate new laptop and desktop models are on the way. These compliance filings, required by law, are a reliable indicator of new products in the pipeline.

Macs with the model numbers A2147, A2158, and A2182 haven’t been released by Apple but appeared last year as well as in this new filing. They were previously listed as running macOS Catalina, and are now showing as running Big Sur.

The new EEC filing also includes unreleased and previously unknown Mac notebook models including A2337 and A2338. Meanwhile, the listing includes new Mac desktops A2348, A2438, and A2439.