iPhone 12 Diary: As expected, 5G coverage means little as yet 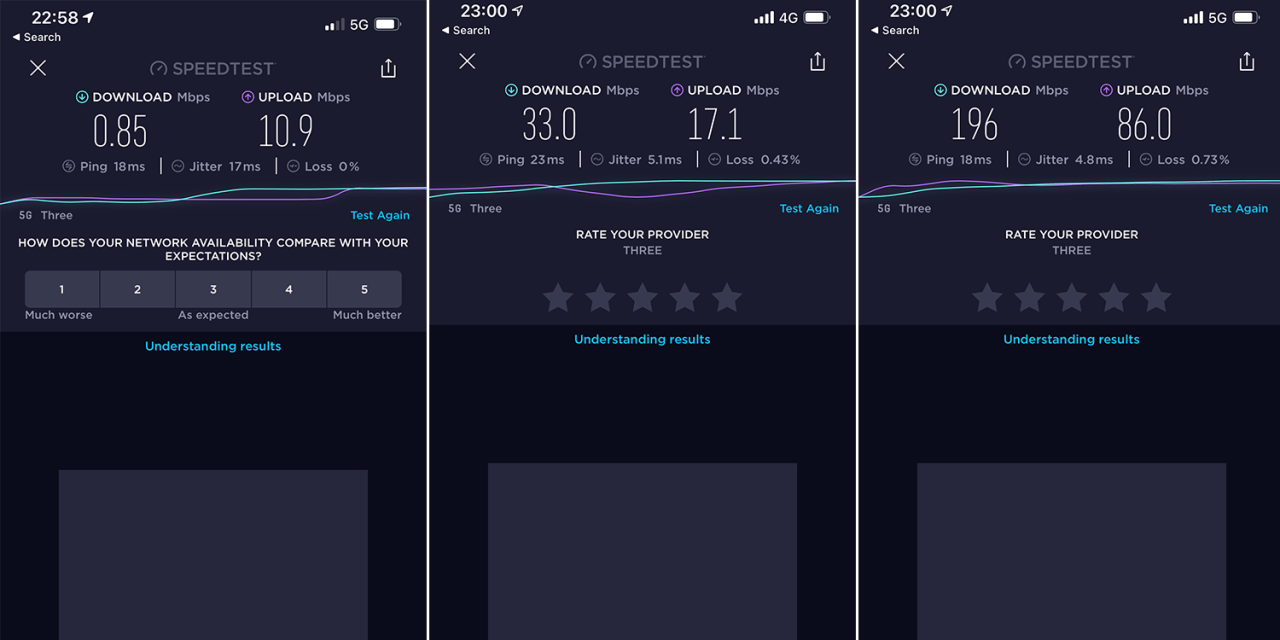 One of the headline features of the iPhone 12 lineup was, of course, 5G support. I said beforehand that 5G coverage is barely a thing yet, even in London – and subsequent tests have demonstrated I was right.

I’ve been conducting periodic speed tests at various locations in central London, and while it does occasionally deliver impressive speeds, this is far from the norm …

In general, the speeds I’ve been seeing in both actual use and in speed tests haven’t been notably better than I was getting on 4G on my previous iPhone 11 Pro.

There were a couple of pieces of disappointing news, even before the iPhone 12 was launched. The first is that only US phones get the faster mmWave standard. We’ve previously explained the two main flavors of 5G.

Sub-6GHz 5G offers somewhat faster speeds than LTE, but not dramatically so. It does offer reduced latency and greater capacity per cell tower, so more people should get closer to the advertised speeds.

Second, the UK and US have the slowest 5G speeds out of 12 countries tested back in the summer. Both types of 5G can be very variable in the real-life speeds they offer, and those tests suggested we shouldn’t expect too much.

The US did better when it came to how often you’ll find yourself on 5G, at 19.3% of the time, putting it in first place. The UK was last, with a pathetic 4.5% of the time.

My experience has shown equal variability in the UK, despite all of my testing being done in central London. Indeed, just to give you a sense of how ridiculously variable it can be, above are three results from speed tests conducted within minutes in the same area. All were conducted late at night, so outside of the times of highest demand.

At 22:58, two bars of 5G provided a completely unusable download speed of less than 1Mbps, and a decidedly average 11Mbps upload.

Two minutes later, just a couple of hundred feet away, two bars of 5G have been replaced by four bars of 4G and we have a much more respectable 33Mbps up/17Mbps down.

Moving only a handful of steps got me four bars of 5G, with the kinds of speeds most people would be happy to see on their home broadband connection: 196Mbps up, 86Mbps down.

This kind of variability is the norm, not the exception. Indeed, sometimes standing still at the exact same spot saw huge differences within minutes. From what I have seen, it’s signal strength, not 5G versus 4G, which is the greatest determinant of speed. The one exception is that only full-strength 5G gets you the kind of broadband-like speeds we’ve been promised.

Of course, 5G coverage will improve over time, and if you expect to keep your iPhone for several years, then 5G will become a useful feature. Right now, though, not so much.

That’s been my experience – how does yours compare? Please let us know what you’re seeing in terms of 5G versus 4G/LTE coverage, and the sorts of speeds you’re seeing on 5G.