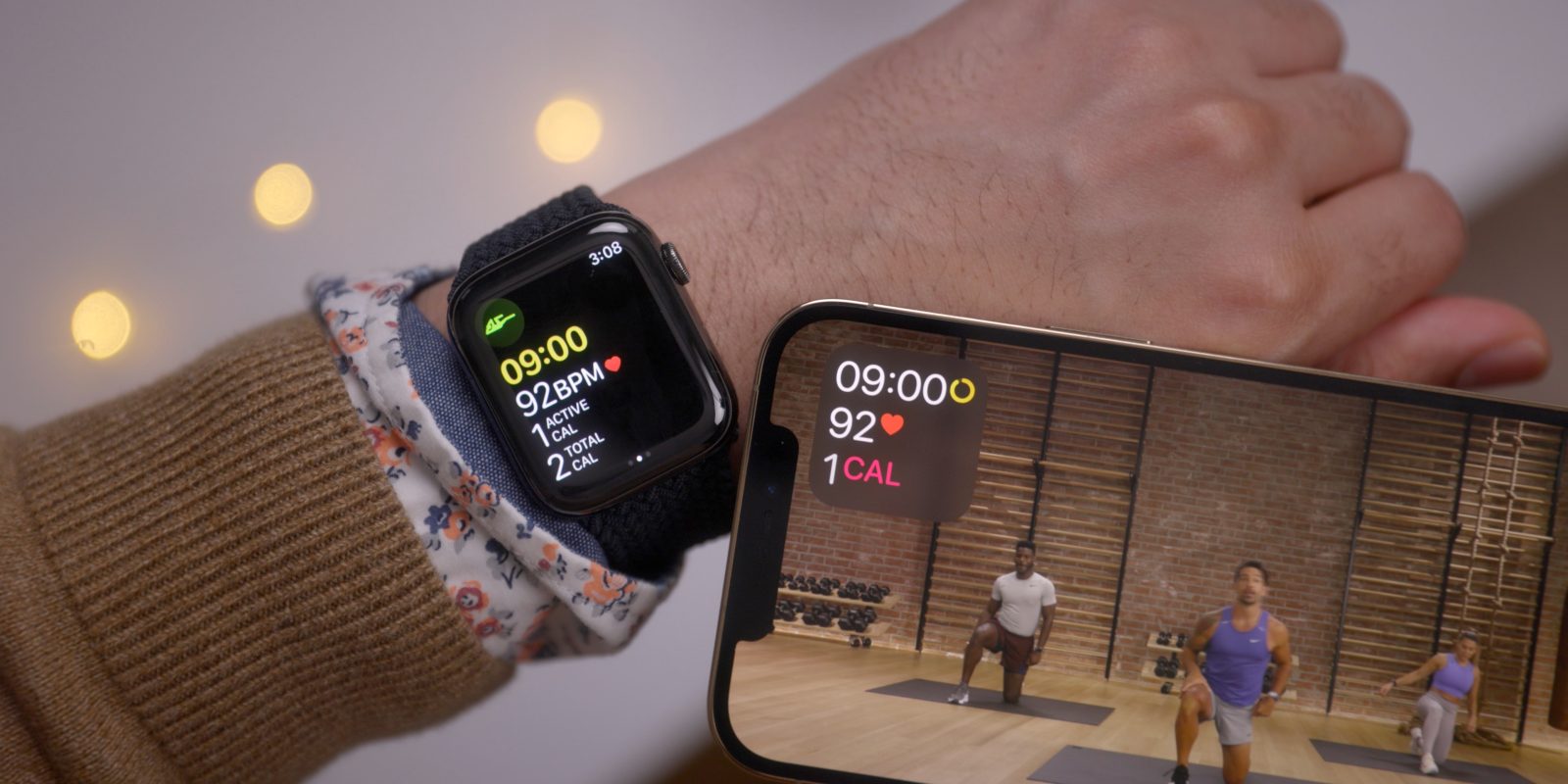 Apple Watch hardware has improved at a steady clip over the years, but the software has also received marked improvements with each new iteration of watchOS. The latest version, watchOS 7, brings big improvements in three key new areas: new watch faces features, fleshed-out fitness enhancements, and the Sleep app. After using watchOS 7 daily for the past few months, and with the recent launch of Apple Fitness+ capping off the release, here’s my final recap review of watchOS 7.

The most obvious user-facing improvements to watchOS 7 are the new watch face enhancements, and this is the feature that I’ve enjoyed the most from watchOS 7. As usual, there are lots of new watch faces, like the Memoji/Animoji, GMT, Chronograph Pro with built-in Tachymeter, Artist, Typograph, and, my favorite, Stripes.

The new watch faces add more variety to the Apple Watch, but they are overshadowed by a much more meaningful feature — the ability to have multiple complications from the same application, even for third-party apps. In previous versions of watchOS, you could only have one complication on your watch face per app, which proved to be a significant limitation. This is a big improvement to the way watch faces work in watchOS 7, lending users more choice over how their watch faces look and function.

A new complications browser, sorted by app, makes it easy to navigate through all available complications. If an app has multiple complications, all options will be listed under the individual app heading. In watchOS 7, it’s entirely possible to have a watch face filled with complications from the same application. That’s great for a third-party app like Carrot Weather, which has many different complications for various weather data.

Watch face sharing allows users to quickly share faces with each other, but it also allows developers to provide pre-configured faces based around their apps. Carrot Weather does a great job with this and provides four different watch faces filled with the developer’s own complications.

The launch of the new Apple Fitness+ service is without a doubt the highlight of the fitness enhancements found in watchOS 7. Apple Fitness+, as we’ve outlined in our hands-on look at the feature, is a complete fitness service that’s similar to Peloton in a lot of ways.

Of course, Apple doesn’t produce any dedicated fitness hardware, instead opting to take a more agnostic approach when it comes to actual fitness equipment. That means that you can use Apple Fitness+ with any bike, treadmill, rowing machine, or other workout appliance of your choosing.

Apple Watch is a requirement to use the new service, and its sensors help users keep tabs on their progress. Apple Fitness+ keeps track of your heart rate during workouts, calories burned, and will also track your activity rings. All measurements are displayed on Apple Watch and on your Apple TV or iPhone/iPad during Apple Fitness+ activities.

watchOS 7 also adds four new workout types to the already diverse lineup of activities. New to the lineup are functional strength training, dance, cooldown, and core training workouts. It’s no surprise that all of the new workouts play integral roles within Apple Fitness+.

Users can also customize all activity goals in watchOS 7, a feature that’s been a long time coming. This means that you can not only change your move goal and exercise goals but can also change stand goals as well.

Now that Fitness+ has officially launched, that opens the door for bigger improvements in both software and hardware. Will Apple add more fitness-centric hardware features to Apple Watch? What type of improvements for fitness can we expect in watchOS 8? It’s an exciting time if you’re heavily into the fitness aspects of Apple Watch.

Another one of the tentpole features available in watchOS 7 is the new Sleep app. Sleep is a big addition to Apple Watch via watchOS 7, as it comes with a dedicated and highly-integrated Sleep app.

Like the Sleep app feature in iOS 14, Sleep for watchOS 7 is designed to help you wind down after a long day, chart and track your sleep during the night, and introduces new do-not-disturb features to prevent your watch from accidentally waking you or those around you.

As someone who has always struggled to keep a good sleep schedule, especially during the COVID-19 pandemic, Apple’s new Sleep app in watchOS 7 has resonated with me. I’ve used the Sleep app to help establish a more concrete bedtime and wake up time via the app’s sleep schedule. The sleep schedule makes it easy to establish sleep goals — initially, my goal was to get at least 6 hours and 30 minutes of sleep each night — and set up a wind-down period just prior to bedtime.

It’s important to realize that the Sleep app in watchOS 7 and iOS 14 are merely tools, but it’s up to the user to put them to use. Sleep will only be as good as the person’s dedication to actually achieving their sleep goals. In other words, this isn’t some magic fix to eliminate sleep deprivation, but it can help motivate you to want to do better. With that being said, using the Sleep app has helped me up my sleep goal to 7 hours of sleep per night.

To be honest, I still struggle with reaching my sleep goals from time to time, but the Sleep app has helped me be more cognizant of my goals and has helped highlight deficiencies in my sleeping patterns.

Having a wearable like the Apple Watch with a dedicated sleep tracking app is beneficial for the obvious reason that you’re wearing the device while asleep. This allows the Apple Watch to use its sensors to measure heart rate changes and movement to track how well you’re sleeping.

You can view Sleep app data metrics right from the Apple Watch to track recent rest periods. For more verbose data, you’ll want to open the Health app on your paired iPhone, which is where all of your sleep data is stored.

In addition, watchOS 7’s Sleep app can help wake you when it’s time to get up, using bedtime wake tones or even haptic feedback so that you don’t wake up other persons around you. Perhaps even more important is the integrated Do Not Disturb functionality, which prevents the screen from turning on when raising your wrist. If you tap the screen or press the Digital Crown, the screen will display the current time in a special sleep view but will remain dim so that its bright light doesn’t disturb others. You’ll need to turn the Digital Crown to unlock your Apple Watch to regain normal functionality.

When you awaken from Sleep mode via either the audible or haptic alarm, you’ll be presented with a special card that displays a greeting, current time, battery percentage, and current weather. I find these stats helpful when starting my day each morning.

The great thing about Sleep is that all it needs is your Apple Watch. There are no weird accessories or dongles to place under your pillow or on your bed, and since you’re already used to wearing your Apple Watch on a day-to-day basis, it doesn’t take a new routine or big adjustment in order to benefit from sleep tracking.

watchOS 7 brings about more diverse watch faces that can lend your more useful data from apps right on your wrist, and it brings about features — Apple Fitness+ and the Sleep app — that could have a large effect on your overall health and well being if you’re willing to take advantage of it. Of course, I could go on name-dropping all of the new features found in watchOS 7 that I enjoy, but these are the three pillars that make this year’s Apple Watch software update stand out above watchOS 6.

The new Apple Fitness+ functionality, while requiring a $9.99 a month/$79.99 a year subscription fee, seems like a good value for those looking to stay active and motivated. Apple Fitness+ doesn’t require any special equipment, and even the cheapest Apple Watch that’s currently sold, Apple Watch Series 3, features Apple Fitness+ support.

Getting good sleep is a huge part of overall health, so it makes sense that the new Sleep app accompanies the launch of the new fitness features in watchOS 7. Like Apple Fitness+, the Sleep app doesn’t require any additional hardware to start using it, and I find that it’s a good way to stay motivated to get the necessary amount of sleep each night.

I wouldn’t say that watchOS 7 brings any groundbreaking improvements to the fore, but with these three tentpole features, plus all of the other little quality of life improvements that we covered in our top feature video, Apple Watch is definitely a better wearable thanks to the hard work of the watchOS 7 engineering team.

What do you think about watchOS 7 after a few months of usage? Sound off in the comments with your thoughts and observations.