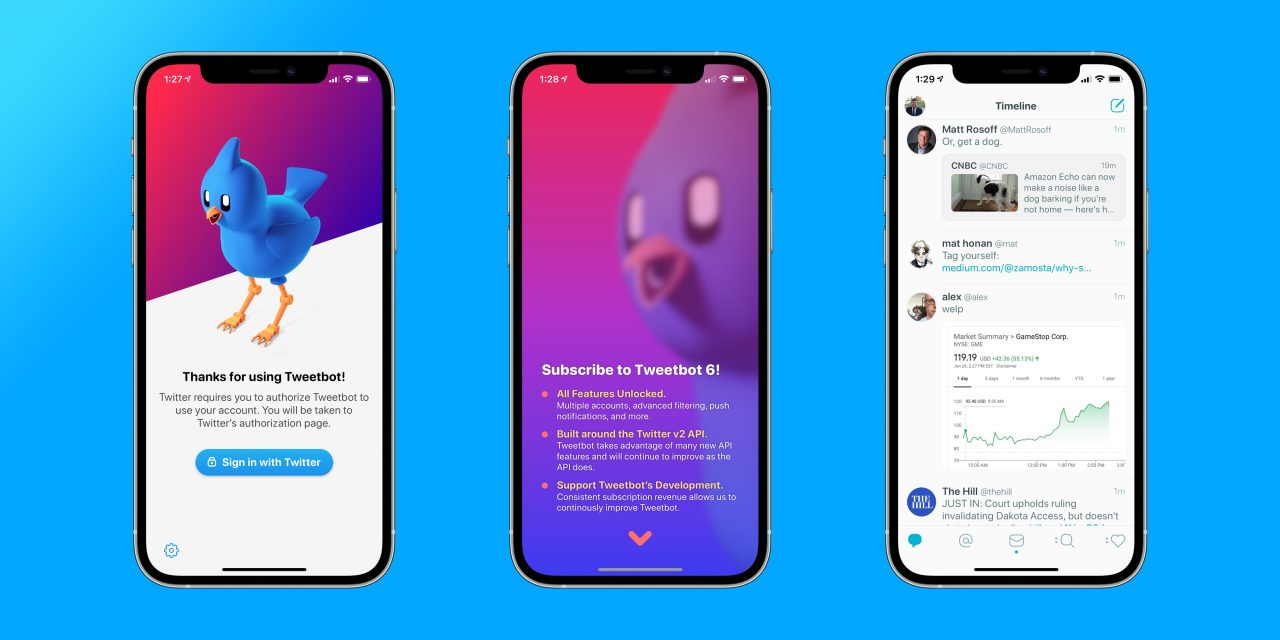 The popular third-party Twitter client Tweetbot has received a notable update today with a handful of new features and a change in its business model. Tapbots says that Tweetbot 6 is free to download, with an in-app subscription available to unlock the core functionality of the app. The promise is that subscription pricing will ensure regular updates in the future.

The folks at MacStories were first to cover the release of Tweetbot 6 this afternoon. The release is an entirely new application, so if you had previously purchased Tweetbot, you’ll need to re-download the app from the App Store and sign up for the in-app subscription.

The subscription pricing is reasonable at $0.99 per month or $5.99 annually, and the subscription is required to access core functionality, including the ability actually send tweets. Without the in-app subscription, Tweetbot is essentially a read-only Twitter client.

Other than the switch to subscription pricing, Tweetbot 6 includes a handful of new features. There are some interface tweaks to the timeline, as well as support for the latest version of the Twitter API. The new Twitter API includes support for polls as well as cards.

Other changes and improvements in Tweetbot 6 include three new app icons, new light and dark themes from which to choose, dark mode enhancements, and Chrome and Firefox support for opening URLs. As MacStories notes, the update also drops support using other services for URL shortening, image uploads, and video.

As is the case when any app makes the jump to subscriptions, the promise is that the stability of the regular income provided by a subscription can help support long-term development. It’s up to the folks at Tapbots to prove this worth, so only time will tell. Ideally, Twitter will also continue to make improvements to its API in the meantime.

Tweetbot 6 is available on the App Store as a free download, but again, the in-app subscription is required to access core functionality of the social network. There is a one-week free trial. As of right now, that subscription does not extend to the Mac version of the app.