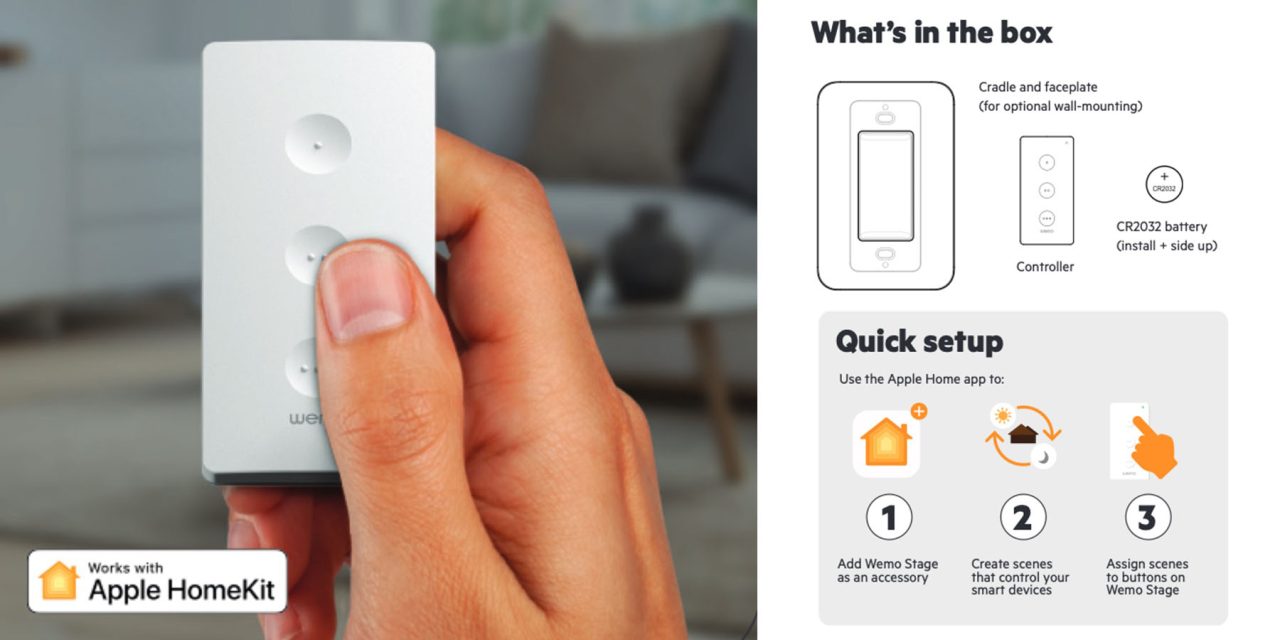 An upcoming Belkin HomeKit remote control to be known as the Wemo Stage has been discovered through FCC documents. Like the Philips Hue dimmer, there are several buttons that can be used to activate different devices and scenes, and it can either be used as a mobile remote or attached to a wall-plate.

Zatznotfunny spotted the filing, which includes photos and a user guide. The user guide reveals that all the setup can be done directly through the Home app.

There are only three buttons, unlike the four on the Philips Hue Dimmer, but the Belkin device is likely to be less confusing as it’s a dedicated scene controller. The Hue device could originally only control Hue bulbs, and so has markings for on/off/brighter/dimmer. It was later given the ability to control any HomeKit device or scene, but the markings are likely to confuse any non-techies in the home.

The buttons offer short- and long-press options, so each can control up to six actions.

Exactly like the excellent system used for the Hue dimmer, the wall-plate has a self-adhesive pad to mount to the wall, and the controller itself attaches magnetically. This makes it very convenient to use it as either a replacement wall switch or a portable remote control.

There’s no clue yet as to either availability or pricing, but it’s likely to be priced to compete against the Hue Dimmer, which offers standalone and bulb kits for around $30. Other HomeKit remote control options include single multifunction buttons from Flic (now) and Ikea (later).

It’s not the only new HomeKit product on the way from Belkin: We learned yesterday that the company also has an AirPlay 2 audio adapter in the works.

Based on FCC filings, the small adapter called “Belkin Soundform Connect” will be powered via a USB-C cable and will support audio output via a 3.5mm mini-jack port as well as Optical Digital Audio. Once you connect an audio device to the adapter, the iPhone, iPad, or any other Apple device will detect it as an AirPlay 2 speaker.