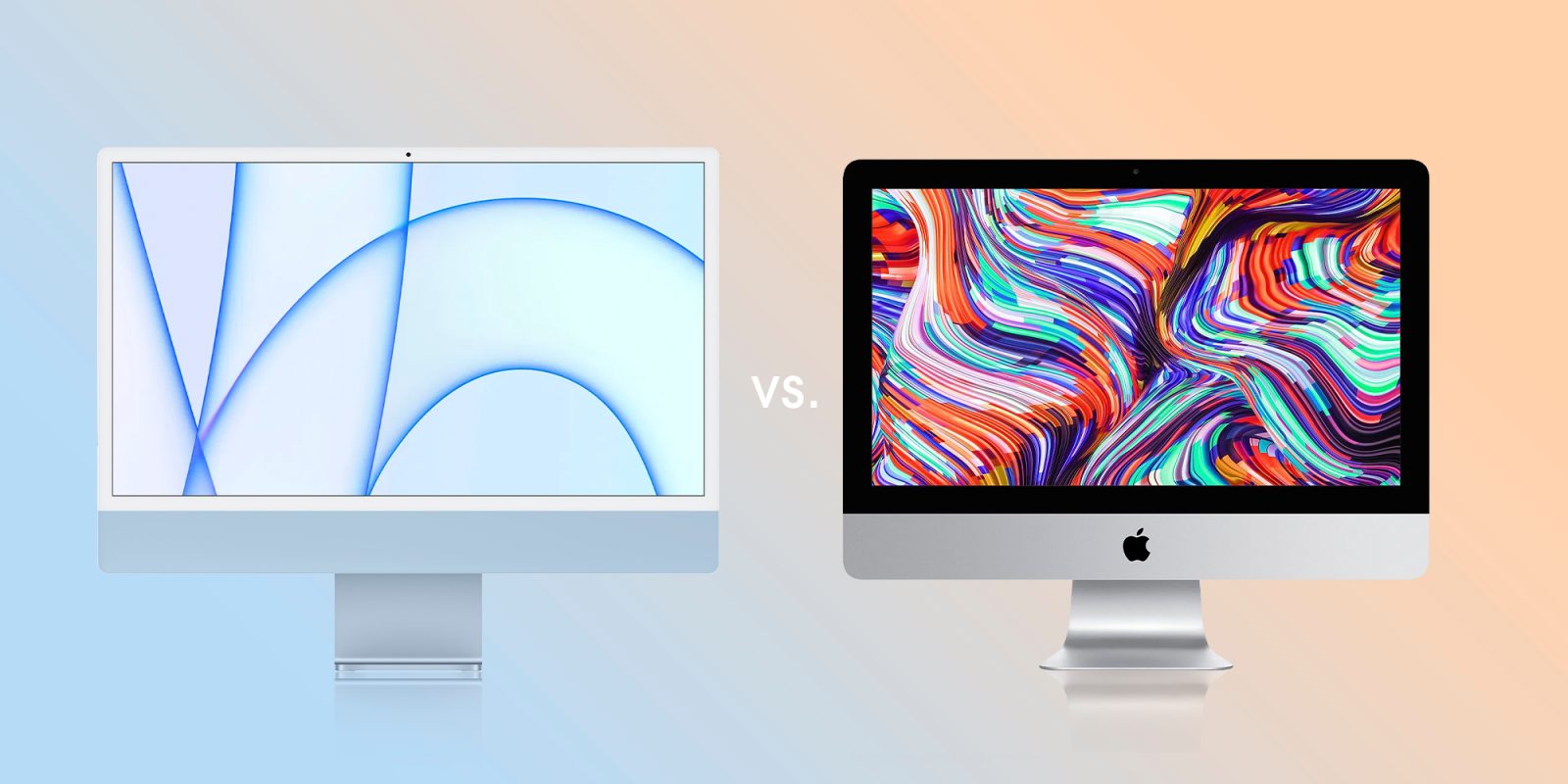 That’s not to say the M1 iMac will be in any way slow. Just like we’ve seen with the M1 MacBook Air, Pro, and Mac mini, Apple’s first desktop-class SoC outperforms a host of more expensive computers with Intel guts – including machines like its 2019 16-inch MacBook Pro.

The higher-end Apple Silicon Macs are yet to come, but the new iMac will be plenty powerful enough for regular users and even some pro workflows. But since there are some limitations, we’ve included the 27-inch 5K Intel iMac in the comparisons below for reference.

When comparing the new M1 iMac to the 21.5-inch Intel iMac, Apple says it offers up to 85% faster CPU performance, up to 2x faster GPU performance, and up to 3x faster machine learning performance. Apple hasn’t shared improvement figures when stacking up against the 27-inch iMac.

The M1 chip also allows the new iMac to edit up to five streams of 4K video footage “without dropping a frame in Final Cut Pro.”

Like the first three M1 Macs, the new iMac is limited to a maximum of 16GB unified RAM. While that may sound light to some, the tight integration Apple brings with the custom SoC and macOS is able to provide more performance than you’d expect. As my colleague Stephen Hall wrote about the M1 MacBook Air, 8GB RAM is going to be plenty on Apple Silicon machines for many users, but go for 16GB if you’re on the fence.

Also, the bezels are much slimmer (shown off in top image) but Apple kept the chin – likely to have someplace to put the fan system. And removing the Apple logo from the front brings a more minimalist design.

The new display also been upgraded to include Apple’s True Tone tech for a better viewing experience that adjusts based on ambient light. However, the Nano-texture screen option remains exclusive to the 27-inch iMac and Apple’s Pro Display XDR.

The M1 iMac gets a number of improvements and modernizations when it comes to I/O. The ports included are now 2 Thunderbolt/USB 4 + 2 more USB 3 Type-C on higher-end models. That does mean no USB-A and no SD card slot.

Gigabit Ethernet has been cleverly moved to the power brick for more expensive models (optional on the base version) and the power cable attaches magnetically.

Other improvements include WiFi 6, Bluetooth 5, a 1080p FaceTime camera, and Touch ID on the new Magic Keyboard (optional on base model, incl. with mid+ models).

Like the other M1 Macs, one limit compared to Intel iMacs is support for only one external display. But that may not be as much of an issue since this is an iMac with an included display.

The verdict is still out on whether the new M1 iMac’s 6-speaker system can rival external speakers, but Apple says they’re impressive.

The M1 iMacs are getting lots of attention over not just the new form factor, but particularly the finishes. There are seven colors to pick from (four with the base model). And a lot of people are excited to see the fun vibe come back to the Mac. For those that don’t dig that, there’s the silver option. However, none of the new iMacs come with black bezels – only white.

The M1 iMac starting at $1,299 feels like a great value when you consider everything you’re getting. However, keep in mind the base model skips niceties like the Magic Keyboard with Touch ID, 2x USB-C ports, Ethernet in the power adapter, and four colors choices instead of seven.

I think the colors are really fun and for those that want to keep it simple, you’ve still got the classic silver. The only downside I see is those who would like black bezels are out of luck.

Unless you’re waiting for the higher-end iMac to be released or need a really powerful machine like a Mac Pro or portability of a MacBook, the new iMac is a compelling buy starting at $1,299. It’s also very competitive with the Mac mini that starts at $699 since a display, mouse, and keyboard is sold separately.

Orders are open for the new M1 iMac with the first deliveries starting May 21.