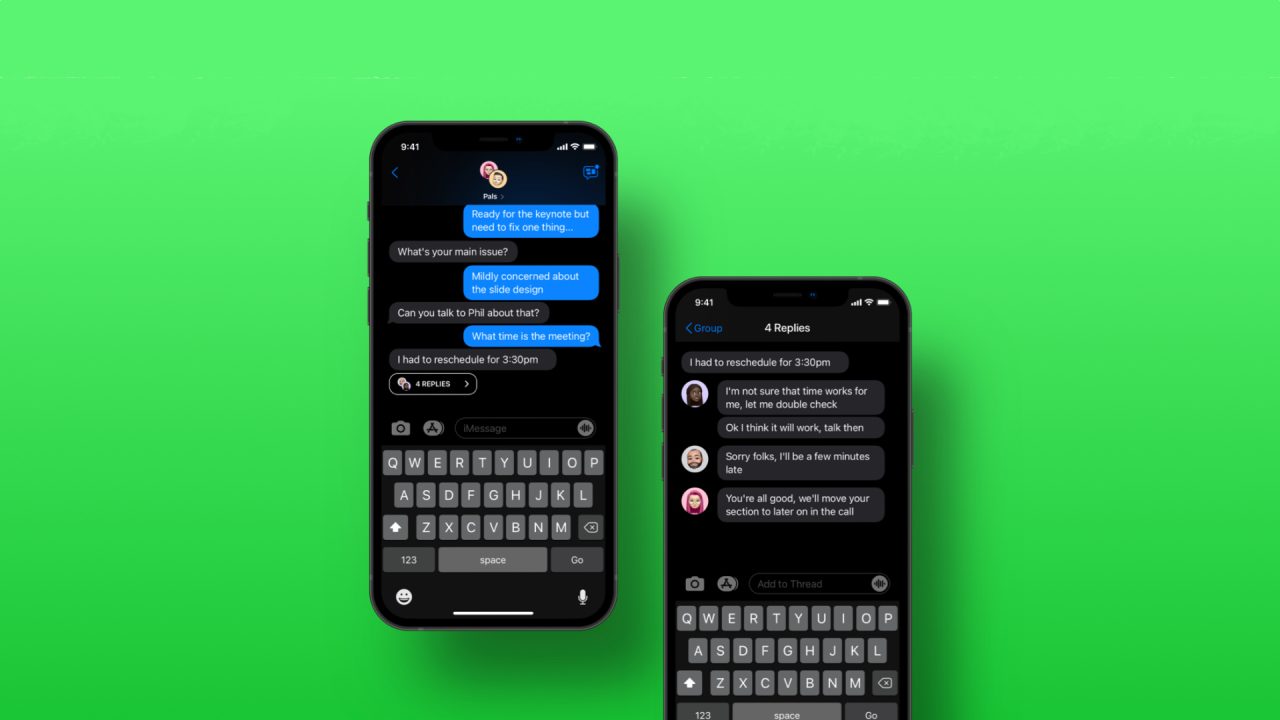 One of the key features of iMessage with iOS 14 was the threaded reply function. But in a group chat with a lot of friends or with multiple conversations happening at the same time, iMessage can still get really confusing. Here’s how to fix it.

I worked with my colleague Parker Ortolani to create a concept of a feature request that should’ve come with iOS 15 but, unfortunately, is still unclear when or if Apple will ever revamp iMessage like we want it to.

I believe that the best way to clear the confusion when having multiple conversations at the same time is to introduce a new thread feature like Slack and Discord already do. When replying to a message, rather than create an endless thread, it would be better if this sequence went to a different tab.

As Parker and I imagined, with a little “Replies” button, users could find everything they want about a subject. It would look similar to the button Apple uses when users can join a FaceTime call in a group chat and at the top of this “Replies” button, there would be pinned the first message. Easy, right?

The next question you would ask is: so how can I know whether someone replied to a thread since this wouldn’t work as it currently does. As a matter of fact, we thought of a new thread button on the top right corner of the Messages app.

Every time there’s a new message in a thread, this icon would appear in the chat so you will know there’s a reply somewhere. Once again, very much like Slack that notifies when you have a new reply in a thread.

Before WWDC21, I wrote a piece about ways Apple could improve iMessage. At that time, one of my complaints was the fact that it’s so difficult to search for old messages, as they don’t load after a period.

So even if you have years of messages stored in iCloud, you’re not able to access them. With iOS 15, Apple is bringing some cool additions, as well as new Memoji customization. “Shared With You” feature is the main feature coming to Messages and it’s really great. The way you can watch, read, and listen to something then reply exactly when the person sent you something is amazing. It’s a feature that Apple clearly put a lot of effort into.

But apart from the Shared With You feature, there’s almost anything to one of the most popular apps from Apple. A few months ago, this is what I think Apple should also add to iMessage:

What do you think about this new thread concept on iMessage? What’s the feature you most want Apple to introduce to Messages? Tell us in the comment section below.