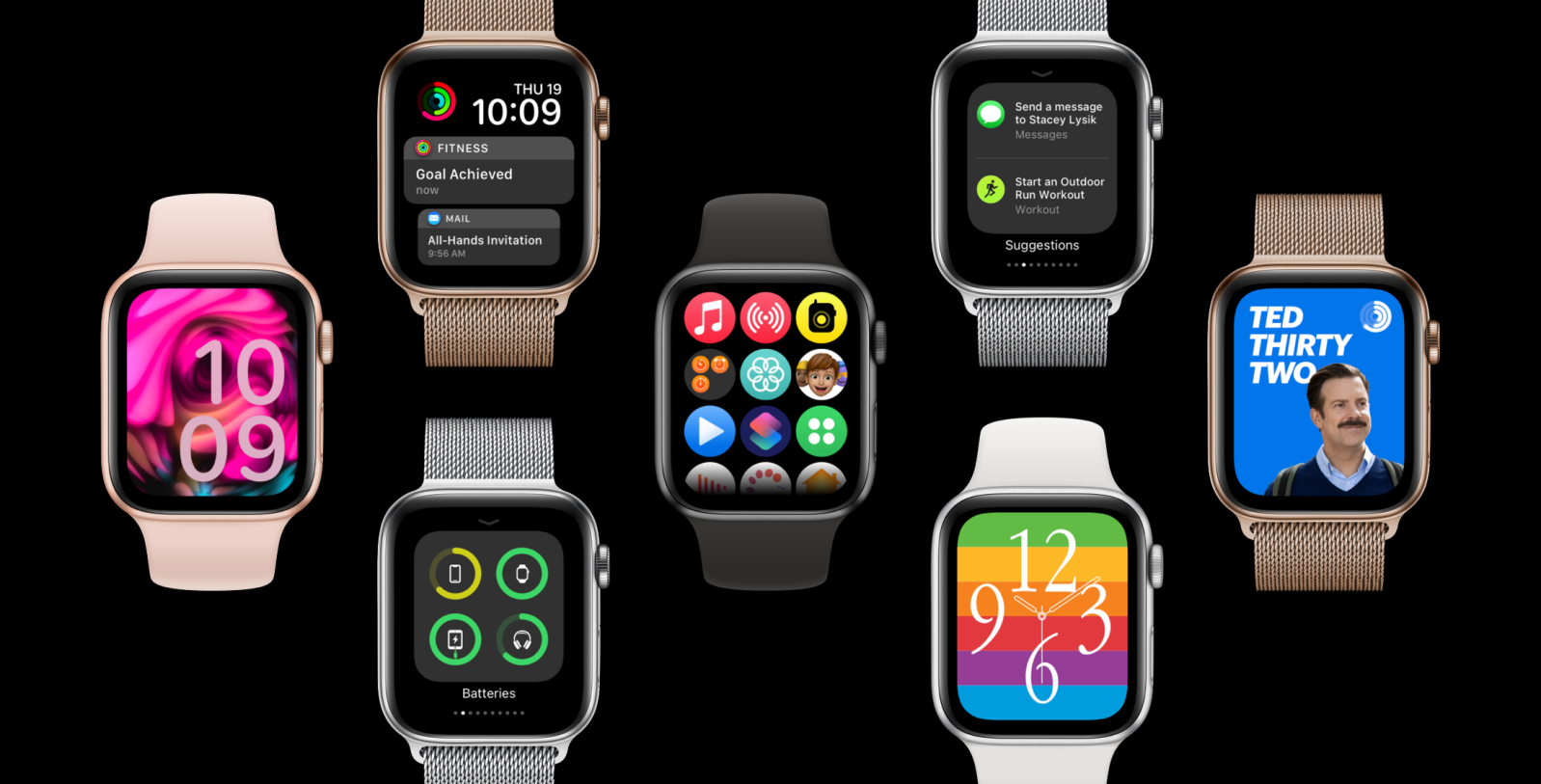 Over the past several years, Apple Watch software updates have been kind of small. watchOS 7 sped up the Apple Watch user interface, while watchOS 8 adds a handful of new useful apps. But with watchOS 9, Apple should introduce the biggest update to the experience yet.

There are a few key components of the Apple Watch interface: the clock, the Home Screen, control center, and Notification Center. All four of these things are great, but they feel a bit stagnant. The Home Screen could be easier to use and organize. Watch faces could be more fun and less utilitarian. Apps and notifications should be able to surface data in more places.

I came up with four new watch faces for watchOS 9. The first is a stunning classic face that uses Apple’s iconic “Apple Garamond” font. There could be three different designs: One that shows full-screen stripes from the six-color logo, one that applies the six colors to the numbers and hands, and one with a beige background.

The notifications face could work much like the Siri face. Instead of showing cards of data in a stack, it could show recent notifications in a stack. When someone raises their wrist, they can see their most recent alerts immediately. It’s perfect for the person constantly on the go or for someone who uses their watch primarily for communication.

The Ted Lasso face is something I’ve designed many times over. With this iteration, I filled the entire display with the blue color that is used for virtually all marketing materials. Ted could be animated and wave or smile at you. In the top left, the time could be written out in words. Whenever “ten” is used, it could replace it with “Ted.” There’d also be room for a single complication in the top right.

Lastly, the relax face could take the animations introduced in watchOS 8 and apply them to a psychedelic new clock. The color of the time could change based on the colors of the animation behind it. Whenever you raise your wrist, the animation changes.

These four new faces would add lots of fresh personality to the Apple Watch. One pays homage to the company’s history, one promotes the company’s best character, one evangelizes relaxation and wellness, and one keeps you more up-to-date than ever before.

The Apple Watch Home Screen has seen a few small tweaks over the past six years. It started off with the visually beautiful honeycomb-shaped sea of circular icons and eventually was joined by a simple alphabetical list view. Neither of these views is ideal. One is hard to use and organize, and one isn’t customizable. With watchOS 9, I sincerely hope the company introduces a new Home Screen design.

I envision a vertically scrolling grid with rows of 3 icons across. You could drag icons to any position, so it’s fully customizable. Drag an icon on top of another, and you can create a folder. When you tap on a folder, the icons fan out after the collapse folder button. You could place folders anywhere you want to and create as many folders as you’d like.

In watchOS 1 and watchOS 2, Apple had a feature called “glances.” Glances were little widgets that you could access from the clock face by swiping up. Control center was a single glance, but with watchOS 3, glances were removed, and control center was expanded. I’d love to see Apple bring back glances but in the form of the small widget size from iOS 14. This would let those of us who use non-data-rich watch faces quickly access complication-style data. It would also be a new place for developers to create software for the watch that doesn’t need to be an entire app. After all, Apple’s latest incarnation of widgets is already designed to be cross-platform.

Widgets could use the same design that they have on the iPhone, so no new design work would necessarily need to be done. Developers could ship a widget instead of an entire app, decreasing the amount of development time and management that a full app requires. If Apple wanted to, they could even allow widgets from iPhone apps that don’t offer a watchOS app to project themselves onto the watch. Now we know that didn’t work well with watchOS 1, but our devices are significantly faster now, and it might actually work this time. Pebble’s watches back in the day could let developers inject data directly onto the watch over the web instead of through a local connection. That might work here too.

Widgets could also be used by Apple to introduce new functionality without adding more apps to the already cluttered Home Screen. The batteries widget could come to the watch and show your phone’s battery status. iCloud already shares your devices’ battery status in Find My, so what if you could choose to show certain devices in this widget as well. I’d love to know my iPad’s battery status on my watch. Widgets could also be a great place to run shortcuts from. Be it Siri suggestions or Shortcuts you’ve chosen, widgets could surface buttons for automation that could be immensely helpful.

It’s no secret that the Apple Watch App Store isn’t want we all hoped it’d be. Most folks use the built-in apps and maybe download a handful from the store. There are plenty of reasons developers have abandoned their watch apps. The WatchKit SDK has been a mess, early apps were slow, users might have simply not cared about having the functionality, they require maintenance on top of the work you need to do for your iPhone app, and so on. Developers have mostly given up any ambition they had for watchOS software. It’s a niche market now.

There are many watch apps that are just terrible. Only a small bunch are genuinely useful and well-designed. I can name only a few off the top of my head: Carrot, Watchsmith, Chirp, PCalc, Deliveries, and Lumy. I can name dozens if not hundreds of iPhone and iPad apps that are great off the top of my head. Widgets might be a way to convince developers to add functionality to the watch in a simpler, more convenient way. If you have a small widget on the iPhone, iPad, and the Mac, you’ve already, in theory, done most of the work.

If you think about what the apps that have disappeared could do with a widget on the watch, there are plenty of opportunities. Feedly could show top stories. Instagram could show photos. Target could show your rewards. Evernote could let you dictate a quick note. Slack could show you recent messages. There are lots of different things that could be done.

Complications are great, and they make it easy to build more personalized watch faces. But in most cases, they are small and simply act as a launch target for their corresponding app. Widgets can have more rich designs, show more data, and be dismissed when you are done with them. There’s more value in a widget that shows you a list of reminders than a complication that shows a single upcoming one.

Keep in mind that Apple launched the watch with both glances and complications. The only reason glances didn’t work in the beginning was that they were insanely slow. Now they’d be much faster, even faster than third-party apps themselves.

I love my Apple Watch. It’s one of my favorite devices. I wear it everywhere, every day, all the time. When the watch was first unveiled, I saw a mountain of opportunity and imagined tons of wonderful apps developed by Apple’s vibrant community of brilliant creators. In the beginning, there were tons of apps and experiments. But WatchKit’s shortcomings obliterated the ecosystem, and many developers haven’t cared enough to try and return to the watch. I’d love for Apple to make it as easy as possible for developers to create simple applets (widgets) for the watch. After all, most things you want from a watch app could be done in a widget.

What do you think about these ideas for watchOS? What do you want to see next year? Let us know in the comments below!