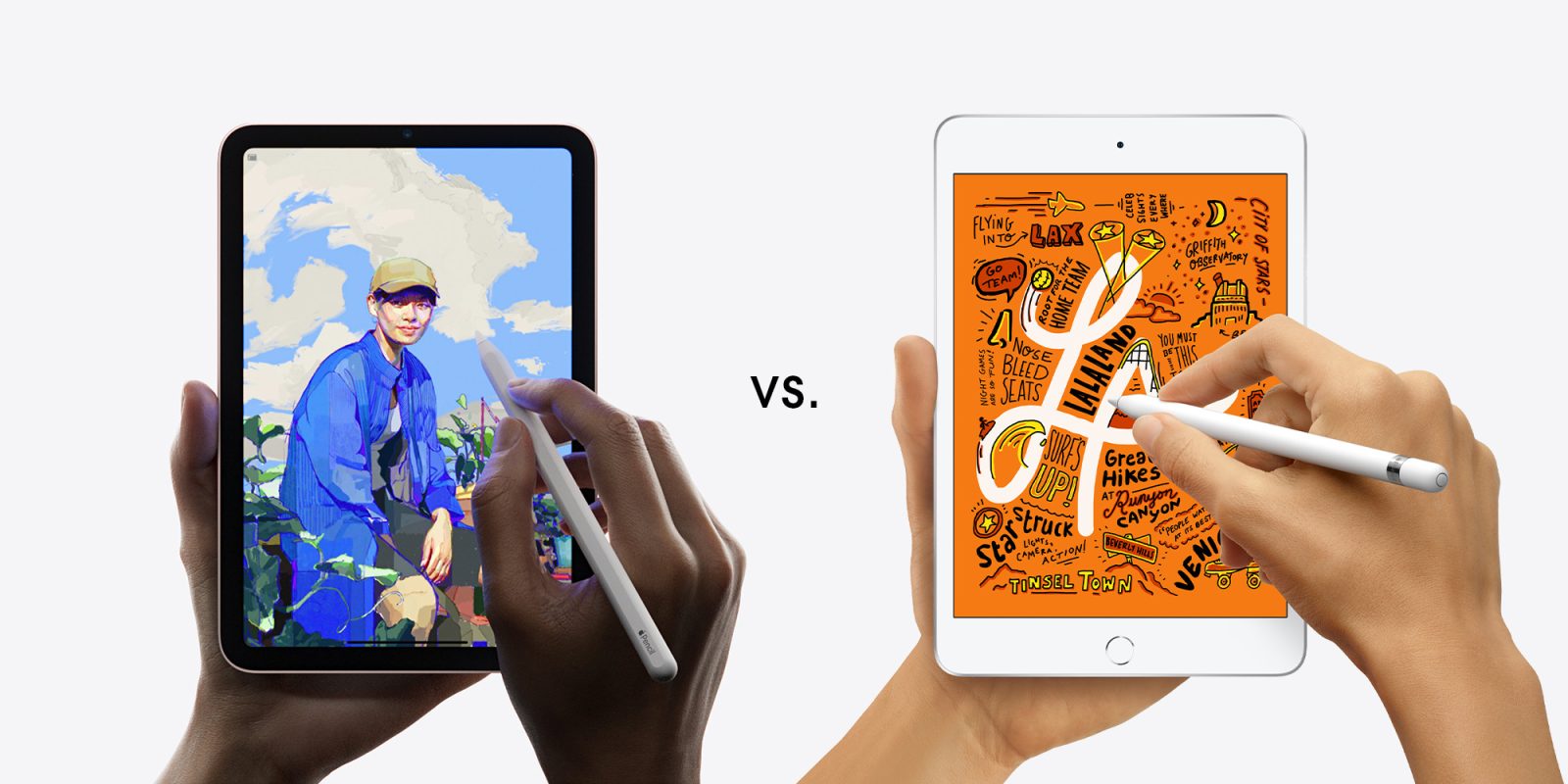 After a two and a half year wait since the last update, a totally redesigned iPad mini has officially arrived alongside the iPhone 13. The exciting overhaul for Apple’s compact tablet comes with a larger all-screen design, USB-C, the A15 Bionic chip, camera upgrades, 5G, Apple Pencil gen 2 support, and much more. Read on for a detailed look at the new iPad mini vs the iPad mini 5 and iPad Air.

Over the last few years, the iPad mini has shown its age more than ever as it kept the same design it’s more or less had since 2012 while the iPad Pro and iPad Air evolved with all-screen and home buttonless designs with flat-edges.

In an exciting move, Apple brought the iPad mini into the future with its 6th gen version taking on most of the great improvements we’ve seen arrive in the modern iPad Pro and Air devices.

Let’s dive into everything you’re getting with the new iPad mini. In case you’re also considering the iPad Air 4, we’ll include that in the comparisons below. And if you’re torn between the iPad Air and iPad Pro, we’ve got a detailed breakdown of those devices too:

But the A15 runs circles around the A12 Bionic that was in the iPad mini 5. Here’s how Apple describes the jump in performance:

The 6-core CPU delivers a 40 percent jump in performance, and the 5-core GPU delivers an 80 percent leap in graphics performance compared to the previous generation of iPad mini.

As Apple has adopted the nearly all-screen design for the iPad mini, you get a larger display that actually comes with a smaller footprint than the iPad mini 5.

No ProMotion as that’s just on the iPad Pro. But otherwise, you’re getting an impressive Liquid Retina display that’s the largest ever on the iPad mini.

Pixels per inch remain the same at 326, which is higher than the 264 on the iPad Air and brightness remains at 500 nits.

Another big update is the move from Lightning to USB-C. That opens up the ability to use the range of USB-C hubs and accessories out there, external drives, and more.

You’ve also got a 12 MP rear wide lens, now with a flash. Other features include extended dynamic range and 4K video.

Interesting colors this time around with starlight replacing silver and pink and purple joining space gray.

Storage options are the same as we saw with the iPad mini 5 and also match iPad Air 4. As for price, there is a $100 increase ($120 for cellular) but you’re certainly getting a lot of bang for your buck.

For some, the new iPad mini launch at Apple’s September event overshadowed the iPhone 13 and 13 Pro with such a big and anticipated overhaul arriving for Apple’s most portable tablet.

Even though you’ve got a more expensive starting price at $499, you’re really getting a lot for the money here with the all-new display and design, USB-C, A15 chip, 5G option, upgraded cameras including Center Stage auto-tracking, and much more.

Are you planning to upgrade to the new iPad mini? Orders are open now with the first devices arriving to customers from the week of September 20.