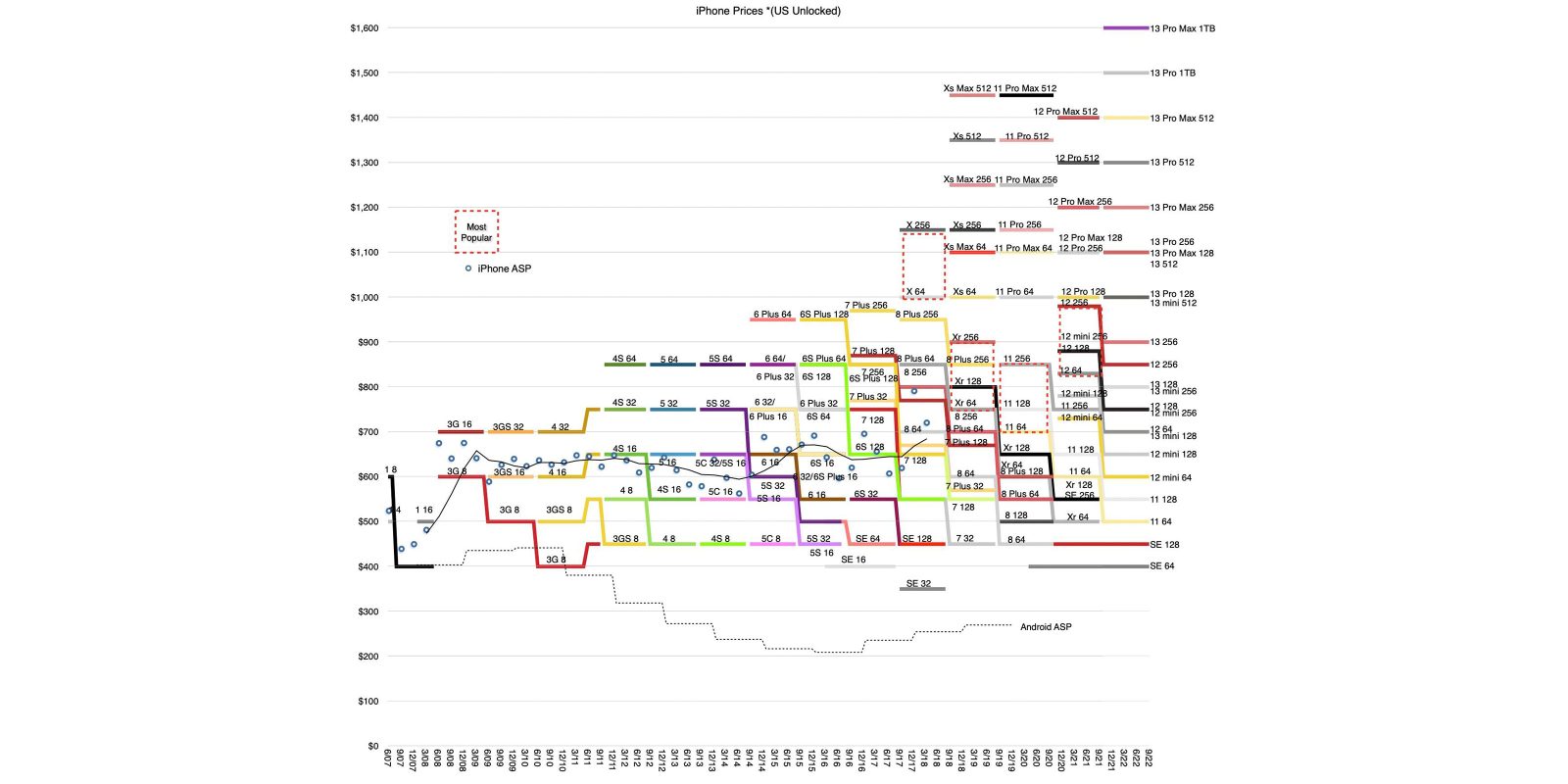 Apple recently sold its two-billionth iPhone, according to a new analyst report, which argues that the Steve Jobs legacy is still evident in the iPhone 13.

In one way, Apple has greatly departed from a principle Steve demanded when he returned to the company in 1997: simplification of the product lineup. But an analyst argues that it’s another of Steve’s beliefs that is still driving Apple’s success today …

No Steve-like simplicity in the iPhone lineup

When Steve Jobs returned to Apple, he famously trashed the complex lineup of Macs sold at that time, and said he wanted a simple quadrant: a consumer desktop, a consumer laptop, a pro desktop, a pro laptop. Looking at the company’s current iPhone lineup, however, it’s more like the “before” than the “after.”

What’s particularly stark in Horace Dediu’s impressive pricing chart above is that, 14 years after the original iPhone sold for $400, you can still buy a brand-new iPhone from Apple for that same $400 – but you can also pay up to four times that.

Things are even more complex than that, says Dediu, when you also factor in carrier promos, trade-in deals, and the secondary market.

Just recently, the 2 billionth iPhone was sold. Unlike the 1 billionth, there was no announcement, no celebration. Partly this is because Apple stopped reporting unit shipments, but partly it’s because it’s not as interesting to talk about 2 billion as it is about 1 billion. There is a desensitizing when numbers get that big […]

The spread of phone price points is wider than ever. Reaching $1600, the range still starts at $399 in the US (excluding taxes.) The total range (number of lines in each year) is increasing also, now 24 mainly due to the addition of a 1TB storage option. NB: There are now two iPhone minis (12 and 13) and one SE bringing up the rear.

Carrier incentives are picking up again. There are tremendous trade-ins and incentives for financing new iPhones which is bound to create retail traffic. Also with the opening of more economies, there is likely to be a surge in shopping. Bear in mind that around 400 million users have iPhones older than 3 years. Trade-in values are as high as $1000. Which leads to…

A thriving secondary market. The used smartphone market is dominated by iPhones and this drops the floor for entry into the iPhone ecosystem to essentially $0.

Dediu argues that Apple’s greatest enemy is the fact that all modern smartphones are good enough these days. It would be very easy for owners to hold onto their phones for years, without feeling like they are missing out on much when it comes to the latest models.

But how the iPhone maker fights back is doing exactly what Steve talked about back in the day: giving consumers things they didn’t know they wanted, but now must have. That, he says, is evident in the iPhone 13.

If you don’t shift the definition of performance eventually you run out of demand at the top of the performance curve. That opens you up to “good enough” competition from below. Instead you need to re-define the notion of performance: compete on a new basis, reset expectations. That the iPhone can find new dimensions of performance and hence demand is effectively a solution to the innovator’s dilemma […]

We did not ask for rack focus, post-production focus (!), night mode, macro photography and portrait bokeh. But once we have these features we begin, ever so slowly, to use them and then we start demanding them […]

What makes the iPhone and perhaps Apple special is that it seems to deliver things that nobody asks for but then everybody wants.