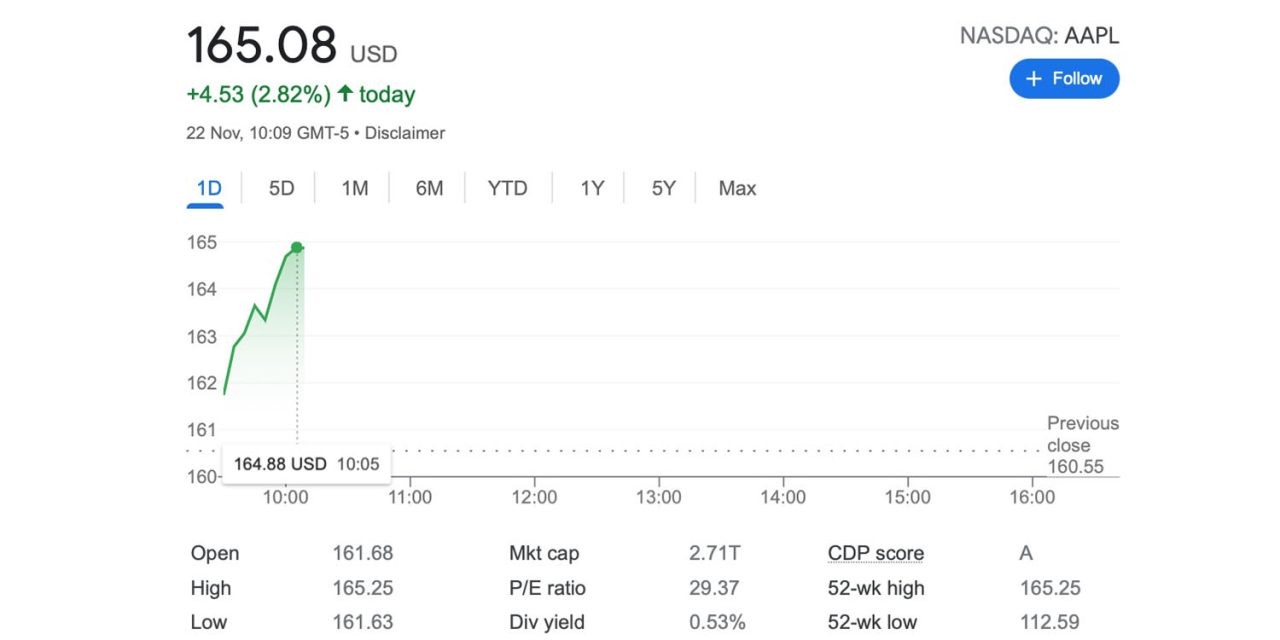 Today has seen yet another AAPL record high. At the time of writing, the stock was sitting at $165.08, up well over 2%. This is the third time the stock has hit a new record high this month.

Walter Bloomberg has tweeted that the stock has also seen the highest percentage gain of any company listed in the Dow Jones index, though he didn’t specify a timescale …

Back in July, we noted that we’d seen a whole streak of AAPL record high values on its way to $150. That followed a mix of good and bad news that month.

On the plus side, Apple suppliers have been reporting strong earnings; tax breaks have been agreed for making iPads in India; and a trio of market intelligence reports point to very high demand for Macs. On the downside, antitrust, taxation, and right-to-repair pressures continue. But Apple itself seems optimistic, reportedly asking suppliers to produce 90 million iPhone 13 models by the end of the year.

There have been plenty more since then.

It’s currently unclear what has promoted the buying flurry this morning; however, two recent developments have made the company’s future look even brighter.

The company likely removed an antitrust threat when it made a belated and unexpected U-turn on the Right to Repair issue. The immediate precipitating factor there may have been a shareholder resolution calling for Apple to “cease its anti-repair policies” to avoid damage to the company’s reputation. That resolution has now been withdrawn.

Apple last week announced a Self Service Repair program to facilitate DIY repairs, after previously arguing that this was too dangerous.

More significantly, a report last week suggested that Apple was pressing hard on plans for a self-driving car.

A report from Bloomberg yesterday indicated that Apple is accelerating its plans to release a self-driving EV by 2025. Following that report, analysts at Morgan Stanley are out with a new investor note detailing how an Apple Car could impact Apple’s industry, as well as the car industry as a whole.

Corroborating the Bloomberg report, analysts at Morgan Stanley say that it remains a “working assumption that Apple will, one day, enter the electric shared-autonomy space in transportation.” When this day comes, the “implications for the auto industry” would be “significant.”

Yesterday’s Bloomberg report indicated that Apple’s ideal outcome is that the Apple Car “would have no steering wheel and pedals.” Instead, it would be designed for complete autonomy. While it’s unclear whether Apple would be able to achieve this with its 2025 timeline, Morgan Stanley analysts say that a car without a steering wheels or pedals “must be a shared service and not an owned car.”