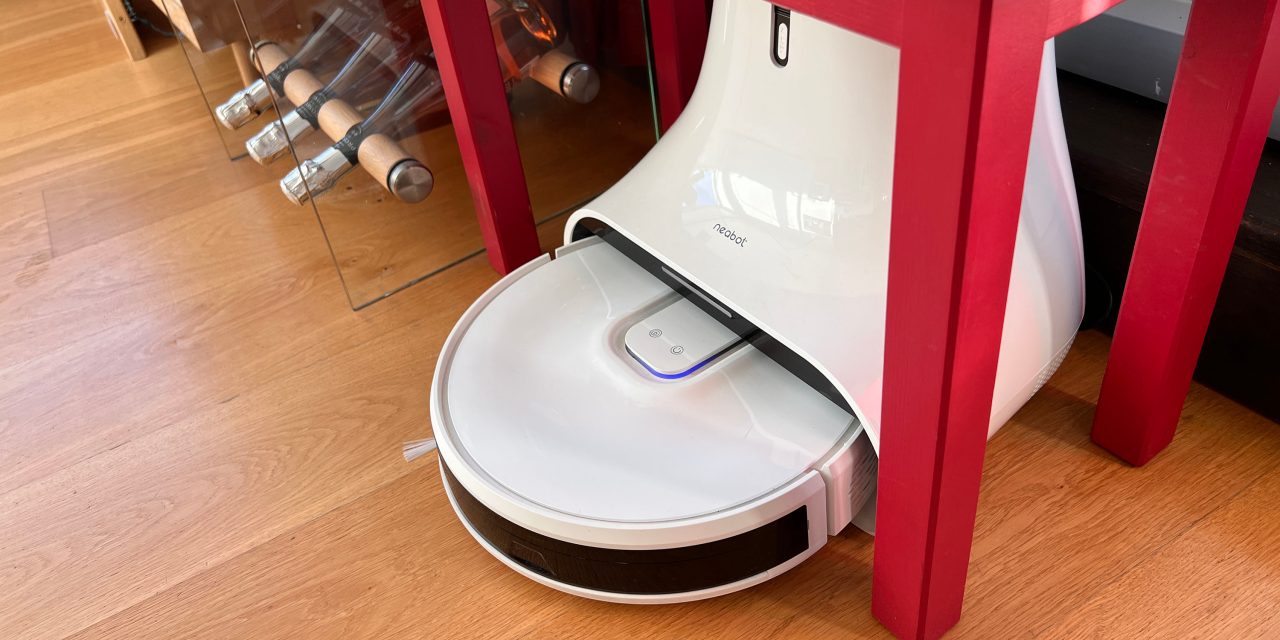 Just when you think robot cleaners can’t get any more convenient, the next generation comes along. The Neabot NoMo Q11 is one of a handful of robot vacuum cleaners and mops which don’t just do the cleaning for you, but also empty their own on-board bins.

My number one rule for buying expensive things was always: Buy the right thing once.

But you can’t do that with technology in general – and smart home tech in particular – because (a) things just aren’t built to last, the way they once were and (b) the tech is improving all the time, so buying the best item today is no protection against lusting after a better one a little later.

Back in 2018, a robot vacuum cleaner was the height of labor-saving devices, doing the vacuuming automatically every morning while we’re still in bed. A year later, mop functionality was being added, to allow robocleaners to wash hardwood floors as well as vacuum them. And now we have self-emptying ones …

With a normal robocleaner, with our 2-bed apartment, we had to empty the dustbin roughly every 2-3 days. That’s the very definition of a first-world problem, but it is one more thing on the to-do list, so I was intrigued to try one which can empty its own bin. Enter the Neabot NoMo Q11.

The cleaner itself looks like, well, most of them. The vast majority of the models on the market are round, and pretty much the same size.

The Q11 does look a bit more hi-tech than most, with a glowing blue LED strip on the top (which you can disable in the app if you wish), but is otherwise pretty standard-looking.

The thing that most definitely isn’t normal-looking is the dock! Rather than a flat plate with battery contacts, this one looks like a futuristic huge shiny white boot. An open-toe shoe for a giant Stormtrooper, perhaps.

The reason for this size is that it isn’t just a charger, but also a second vacuum cleaner. This one waits for the robot to dock, then sucks the dirt out of its dust-tray into a much larger 2.5-liter dust-bag. That one only has to be emptied around once a month.

The dock is not exactly unobtrusive, but in a modern home with plenty of gadgets, it doesn’t look too out of place. I could imagine it might in a more traditional house, however.

Setup is the usual process for networked gadgets of this kind, which I absolutely hate:

Anything that requires me to open an app, begin the setup process, then switch my iPhone to a Wi-Fi hotspot generated by the device itself before returning to the app, always makes my heart sink. I don’t think I can recall a single occasion when that has worked first time, and in the worst of cases you can end up running through the loop four or five times, only finally making it work by sacrificing a goat.

Sure enough, this one took three attempts before it worked. It is, at least, a one-off process.

The app is also pretty unintuitive. Once I’d added and named the cleaner, I really had to hunt for a place to set the cleaning schedule:

Tapping the grid before tapping the robot. But again, you typically only use the app once to set the schedule, and then forget it.

Neabot claims that the 4000Pa suction in maximum power mode is the strongest on the market, and whether or not that is the case, it is certainly extremely strong! There are two lower power levels, and the standard one is 1500Pa, which I found was enough for daily cleaning.

A very welcome surprise was how quiet it is in use. My Apple Watch measured it at around 57-60dB at one meter, and subjectively it felt like a very comfortable noise level which is much quieter than its predecessors.

What is not quiet is the suction motor in the dock! The robot docks itself with a quiet bleep and a murmured ‘Finished cleaning,’ and then it sounds like a 747 is powering-up for take-off! This doesn’t take long, around five seconds or so, but you definitely won’t want to schedule a clean to finish while you are sleeping …

Like most robocleaners, the Q11 uses a LiDAR system to map your home, and the efficiency of the mapping algorithms just seems to get better and better. The robot set off, mapped out the circumference of the apartment and then cleans back-and-forth very efficiently. The total time is about the same as our two previous robots, at around 35 minutes, but it reaches some areas the others couldn’t as it was able to get under more furniture thanks to being slightly shorter in height.

It tries to intelligently map the home into zones, marked by different colors. In our case, it divided the apartment into two, in a pretty sensible way – effectively the living room and kitchen as one zone (in blue) and the rest as another (in yellow). You can then use the app to tell it to clean a single zone. It also has the usual spot-cleaning option to clear up a spill.

The mopping performance is also very good, though this is only suitable for homes with mostly hard flooring as – bizarrely – it has no way to automatically recognize and avoid carpets and rugs. You can set no-go areas, but as our only carpeted area is in the bedroom, it was easier just to close the door.

I have only two complaints. First, there’s no HomeKit or Siri Shortcut support (it does support Alexa). That’s not a big deal, as mostly I just set the schedule and get on with it, but if you do want an unscheduled clean, you have to use the app to start rather than Siri. Second, although the app lets you pause and restart the cleaner – which can be handy if you want it to wait until you’ve made breakfast or whatever – there isn’t any way I can see to tell it to dock. To do that, you have to press the Dock button on the robot itself.

It has once got confused, spinning in circles when a large parcel arrived between it starting and ending the clean, but otherwise it has performed flawlessly, and takes an efficient route back to the dock with less hunting than other models we’ve tried.

Robot vacuum cleaners are available at all price levels these days, from not much more than $100, which is pretty wild for what was once a luxury product category.

A typical premium model retails these days for around the $300-400 level in real-life, though official prices can be much higher.

The Neabot NoMo Q11 officially retails for $700, and is currently available for $600.

Whether the self-emptying capability justifies the price premium will depend on how lazy you are, or possibly how much back-pain you suffer when bending down! Personally I do love the fit-and-forget nature of this setup, with just a monthly reminder to empty the dock bag. Your mileage may vary.

The Neabot NoMo Q11 self-emptying robocleaner is available from Amazon for $599.99.