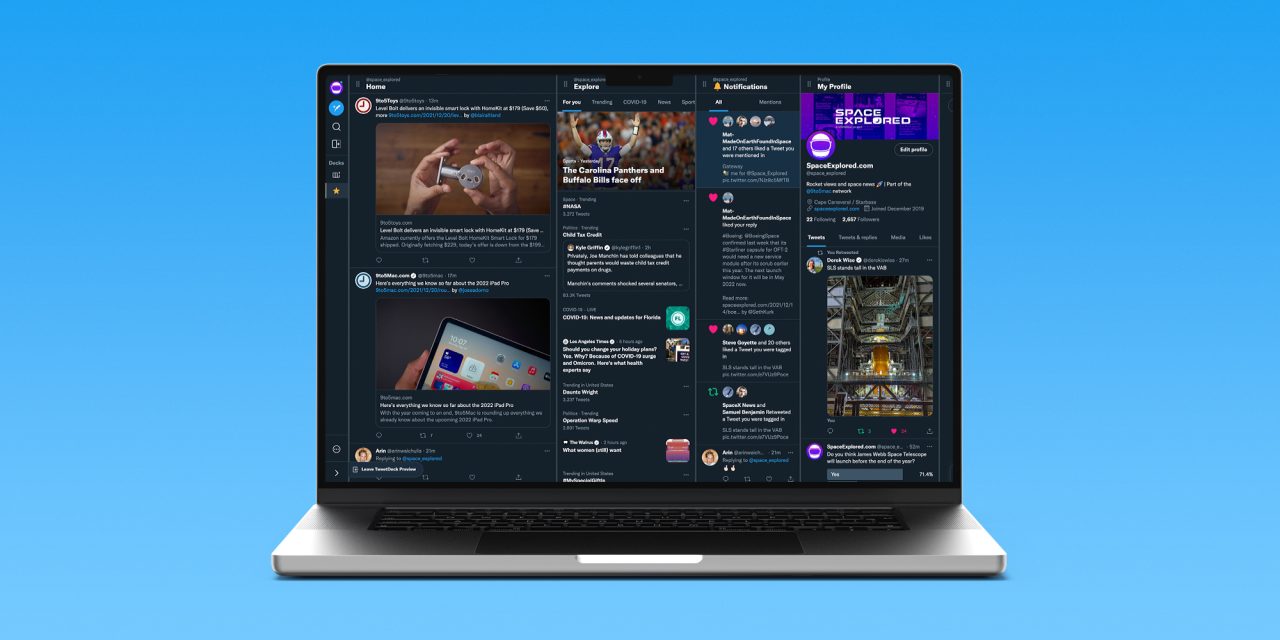 For years I’ve been a power user of Twitter’s TweetDeck. The ability to see tweets as they happen in real-time from those I follow or specific keywords is an essential tool in modern journalism. A preview of the newest version keeps that idea while bringing a new design and better integration with recent Twitter tools, although it comes with some compromises for now.

Currently, the new TweetDeck preview is only available to select users. Luckily our sister site Space Explored‘s account was one of them. The preview comes with both improvements and probably some unwelcomed changes, but one thing is for sure: it definitely looks like a Twitter product now.

One of the most exciting additions is native support for Twitter polls and gifs. The newly designed tweet menu looks like the one from other native Twitter apps. TweetDeck now allows users to add the full suite of media options to tweets, including images, gifs, polls, and emojis. Next to those options, you will find the schedule tweet and tag location options, just like the main Twitter app.

The first change you will notice when looking at the new TweetDeck preview is its major design overhaul. Gone is the minimalistic look and in its place is a Twitter-inspired design. This new design comes with some compromises for now. The individual tweet cards are naturally longer. With the most narrow columns, you can only see four to six tweets at the smallest settings, depending on their content.

However, there’s no longer any mistaking that TweetDeck isn’t a product of Twitter. The UI matches the native apps even down to the addition to messages drawer that slides up just like the website. In addition, the tweet cards now match too.

Column settings have made a significant change as well. Now you will be able to change the width of the columns individually rather than all at once, allowing for some columns like Home to stand out more. The general settings now take you to Twitter’s main settings section. Display settings are still available and now have their own menu item, which is where font size lives.

One of my personal favorite additions so far has been Decks. Now you can create multiple Decks instead of just one large one. This allows you to tidy up your workspace by grouping similar columns together. Each is only one click away, so no more getting lost while vertically scrolling for that one keyword search column.

Twitter stated the new version of TweetDeck would feature new columns. However, the Activity and Collection columns seem to have been removed, while others have found new homes. Search, for example, is where you can follow a single user, Trending is now the Explore tab, Likes can be seen in your profile, and mentions in notifications. Overall the column functions seem to have been streamlined to reduce the total number of columns but keep as much functionality as possible.

TweetDeck teams not avaible in preview

Now here is the kicker. If you want to use the preview of the new design but are a member of a TweetDeck team, you won’t be able to access those accounts. While teams don’t seem to be going anywhere, the experience is still going through a redesign, according to Twitter’s TweetDeck FAQs. So right now, if you have the preview and want to tweet from a team, you will have to return to the older version.

Currently, testing is rolling out to select users in the US, Canada, Australia, and New Zealand. Unfortunately, there is no word from Twitter about when everyone will get access to the new TweetDeck version.