Should you buy the iPad Air or the 11-inch iPad Pro? Here’s how they compare 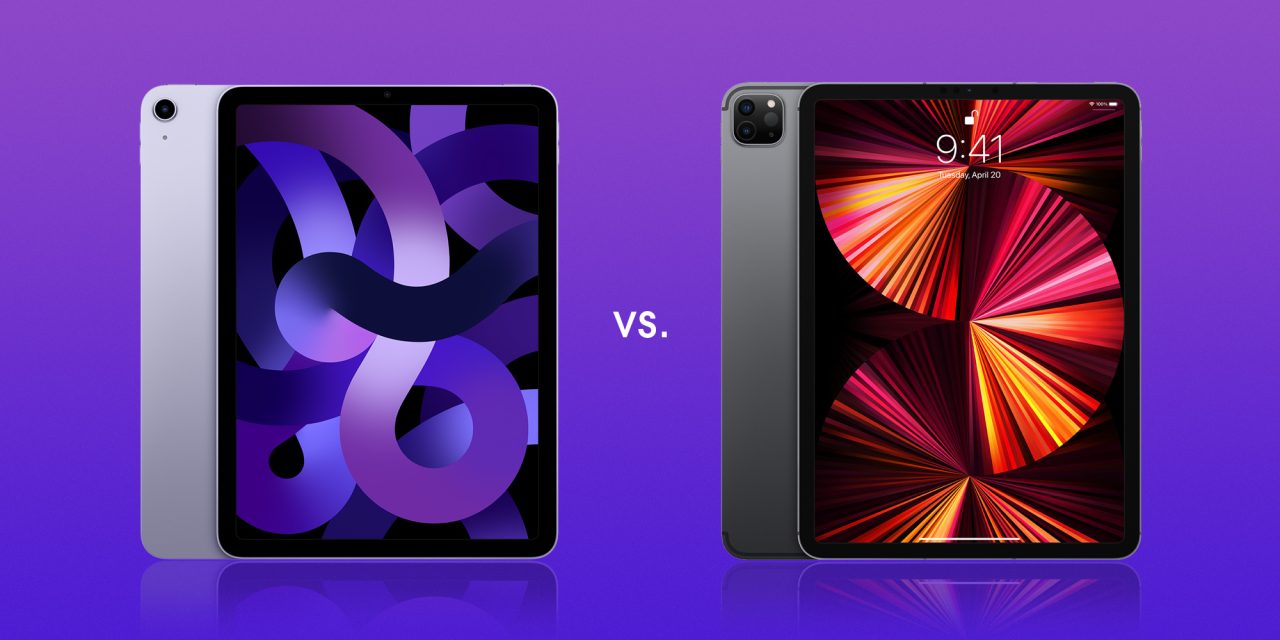 While the 2020 iPad Air already had many of the great features of the 11-inch iPad Pro, the new 2022 iPad Air narrows the gap even further with an M1 chip, ultra-wide front camera with Center Stage, 5G connectivity, and more. However, the iPad Pro still offers the most features and best performance. Below we’ll break down all the similarities and differences between the iPad Air vs iPad Pro to help you decide which to buy.

And check out the most current comparison of the M2 and M1 iPad Pro vs iPad Air:

In 2021, the 11-inch iPad Pro arrived with the powerful M1 chip, Thunderbolt connectivity, 5G for cellular models, new camera features like Center Stage, and more. All of that set it apart from the 2020 iPad Air, justifying the $200 (and up) price difference.

However, with the 2022 iPad Air, Apple has really blurred the line between the Air and Pro models, giving the majority of people the incentive to go with the Air that starts $200 below the $799 11-inch iPad Pro.

There are still a few aspects where the 11-inch iPad Pro stands out from the new iPad Air but the number of people who will be willing to pay for those differences is smaller than ever.

Of course, if you know you want a 12.9-inch iPad, the iPad Pro is your only choice. But read on below for a detailed look at the 11-inch iPad Air vs the iPad Pro.

Very notably, the new 2022 iPad Air is powered by the M1 chip just like the iPad Pro. That means both have eight-core CPUs, eight-core GPUs, and 16-core Neural engines.

The two main advantages the iPad Pro holds over the iPad Air – in this category – are Thunderbolt support and 16GB RAM on the 1TB and 2TB models.

But for the vast majority of users, the M1 with 8GB RAM will be more than powerful enough for years to come. Thunderbolt and 16GB RAM with the iPad Pro will likely only be tempting for professionals.

However, the biggest difference is you only get ProMotion with up to 120Hz refresh rates with the iPad Pro display.

Meanwhile, HDR brightness up to 1600 nits is only available on the 12.9-inch iPad Pro, not the 11-inch version.

iPad Air works with all the same great Apple accessories as the iPad Pro. That includes the second-generation Apple Pencil, Magic Keyboard, and Smart Keyboard Folio.

One notable difference for connectivity and I/O is that the new iPad Air uses Touch ID like its predecessor as opposed to the iPad Pro coming with Face ID.

Like the iPhone SE 3, the new iPad Air doesn’t get mmWave 5G support with its cellular models. But as mmWave is the rarest version of 5G coverage to find, that’s probably not an issue for most people.

If the color of your next iPad is an important factor, you’ve got more choices with the iPad Air. The new model comes in space gray, starlight, pink, purple, and blue.

The iPad Pro only comes in space gray and silver.

The 2022 iPad Air has the same battery life as the 11-inch iPad Pro and previous-gen iPad Air:

Here’s a breakdown of the price differences (MSRP) between the iPad Air and 11-inch iPad Pro. It’s not exactly apples to apples since the two iPads have different storage options, but you can save some significant cash with the iPad Air.

You get a solid rear single camera with the iPad Air that includes the same 12 MP wide lens that is found on the iPad Pro. It shoots 4K video at the same fps as the Pro too.

However, with the iPad Pro, you’ve also got a 10 MP ultra wide lens plus the LiDAR Scanner, and the True Tone flash.

But the new 2022 iPad Air comes with a great front camera upgrade, the same ultra wide 12 MP lens with Center Stage support as the iPad Pro.

A couple of differences – the iPad Pro front camera features support for Portrait mode, Portrait Lighting, and Animoji/Memoji while the iPad Air front camera does not.

And when it comes to speakers, you’re getting four-speaker audio with the iPad Pro while the iPad Air has a two-speaker system.

When you consider all the similarities and differences, the iPad Air is likely going to be the best choice for most people. It’s got a price of around $200 less than the iPad Pro while including almost all of the best features of the top-end iPad.

Orders start for the new iPad Air on March 11 with deliveries arriving from March 18. Meanwhile, discounts are available for the 2020 iPad Air.

If you know you’ll be pushing your tablet to the limit regularly, the iPad Pro still delivers the top-performing package with up to 16GB RAM, up to 2TB storage, 120Hz ProMotion display, and Thunderbolt support.