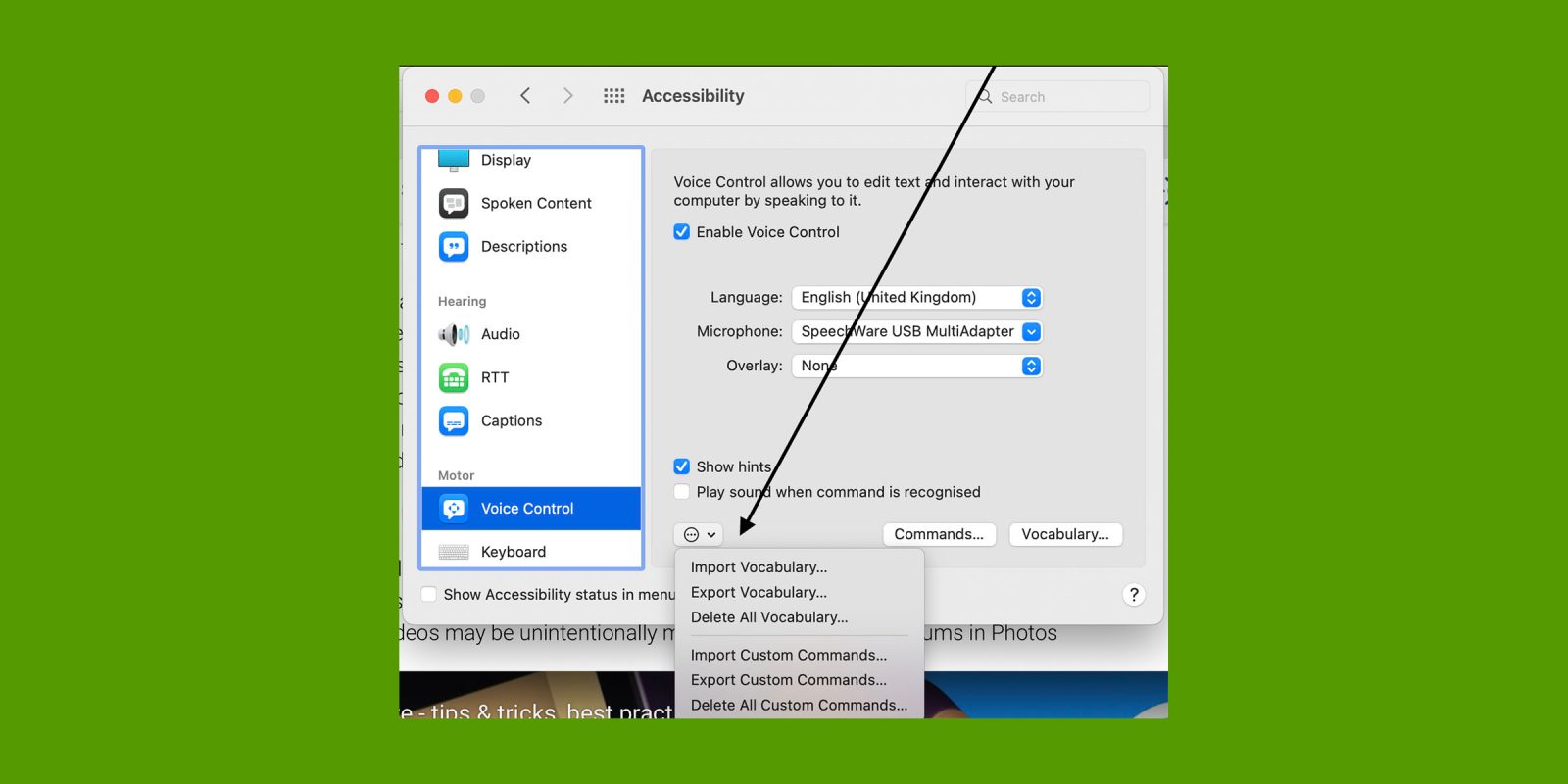 Although it isn’t shown in the release notes, it appears to have been added in macOS Monterey 12.3 …

As the name suggests, Voice Control is designed to allow people to control their Mac using voice commands, rather than a mouse or trackpad. Additionally, text can be dictated rather than typed. Both features are crucially important to those who don’t have full use of their arms.

A huge benefit of both Voice Control and dictation on Apple devices is that it works offline. However, this poses an issue when you replace your Mac, as there was previously no way to transfer your custom commands and vocabulary. This feature has now been added.

In macOS 12.3 you can now import or export Vocabulary and Custom Commands in Accessibility on Mac from a new drop-down menu visible as soon as you open Voice Control.

Because Voice Control and everything you dictate stays on device, and not in the cloud, these new features will be helpful in transferring custom vocabulary and commands built up over time to a new Mac.

I have called for this functionality since Voice Control was launched three years ago and most recently last August 2021. It’s a long awaited improvement.

Hughes says that Voice Control is a great application, and it’s to the company’s immense credit that the tech is bundled in free with every Mac, iPad, or iPhone. He welcomes this latest development.

However, he says that other longstanding issues with Voice Control and dictation still need to be resolved. He has listed no fewer than 14 different problems.

Voice Control doesn’t always take into account the grammar of many sentences, e.g., dictating the word “will” often leads, incorrectly, to capitalization of “Will” as in the man’s name. This is annoying and not productive. It’s intermittent but happens especially if you pause dictation. It happens with other words too, which slows you down as you continuously have to clear up dictation errors

When dictating the command “open quotes,” a space isn’t automatically inputted after the last word dictated so dictated text appears like this: the quick brown fox” jumped over the fence.” It’s incorrect formatting with the quotation mark hard butted to the last word dictated and requires going back and editing and inserting a space after the last word dictated (fox) and the open quote mark immediately before jumped. This should happen automatically when dictating. It does in other speech recognition apps. You can say “space key” to insert a space before saying “open quotes,” but this is extra breath and energy that some physically disabled people might not have and shouldn’t be necessary.

It’s a similar situation with dictating emoji. No space is inputted after the last dictated word so dictated text appears as…”the quick brown fox jumped over the fence👍“

When dictating in the macOS Mail app, a space isn’t inputted after the last word dictated (fence) and the emoji. It looks unnatural and requires going back and entering a space manually. It should happen automatically. Very unproductive. Apple made a virtue of showing dictating an emoji in a film on the stage at WWDC 2019 to warm applause, but it hasn’t been implemented properly.

Voice Control dictation doesn’t work in the WhatsApp text box in the app downloaded from the company’s App Store in macOS. Why does Apple allow apps in the App Store that don’t support basic accessibility requirements such as a popular messaging app used by billions every day not supporting Voice Control dictation? It may be something to do with the WhatsApp application still being a Rosette app, but nonetheless it is disappointing to see Voice Control not supporting it.

This sort of thing should be a minimum requirement for the App Store. Is accessibility part of Apple’s now infamous App Store policies? If not, it is time it was as disabled people’s access and life chances socially, in education and work are too important to ignore.

Also, dictating text into the WhatsApp Web text box in Apple’s web browser Safari on a Mac sometimes leads to the web page freezing and only shutting Safari down and relaunching will fix the issue. You lose all the text you were dictating, which is very inconvenient. It often happens if you pause dictating or if you correct text several times. I drew this bug to the attention of Apple in January, and they confirmed they could replicate it, but there was no fix for it in macOS 12.3

Works in some browsers but not others

Voice Control dictation doesn’t work with third-party browsers like Firefox for Mac. Why? Voice Control users can’t dictate into any text boxes in the Firefox for Mac browser, including WhatsApp Web. This may well be a Firefox issue but surely Apple can bring its considerable influence to bear on this unfortunate situation. Things aren’t much better in the Google Chrome browser on the Mac either. Disabled users are being failed by this lack of access.

Works in some text boxes but not others

Frequent dictation errors aside, while Voice Control works well in Apple’s own applications such as Messages, Mail, and Pages, it’s a lottery that third-party application text boxes will work with speech recognition apps more generally. Some of the biggest platforms in the world, Facebook, Twitter, and WhatsApp included, who talk big about their accessibility credentials, have text boxes that aren’t accessible to speech recognition apps.

Not being able to dictate in a number of text boxes on very high-profile platforms is the digital equivalent of a restaurant, shop, or public building refusing to provide a ramp for a wheelchair user. Unacceptable and in a number of countries illegal these days.

Voice Control often doesn’t recognize foreign names. It would be great if the app offered a custom contact pronunciation feature which would get round this problem. Google offers this on Android phones. I’m sure something similar could be applied to Voice Control on both a Mac and iPhone.

The frustrating thing is that the names are already in the OS in the Contacts app, but dictation doesn’t recognize them and this solution would get around that problem. I have contacts with a Polish name, Wojtek, and a Welsh name, Morlais, and Voice Control never understands them when dictating, even if they are added as custom words in vocabulary.

More broadly, the Dragon speech recognition app for Windows computers provides the ability to train words so the same dictation fails don’t occur repeatedly. This is a feature that would enhance Voice Control dictation and make it more productive and less frustrating to use. Voice Control is an application that should improve with use and learn from mistakes, but it simply doesn’t. Repeating the same dictation errors over and over is extremely tedious. Very crude, and un-Apple like in my opinion.

In Custom Commands – Paste Text – the text box does not support system Dark Mode, making it impossible to configure text in this box when Dark Mode is on.

The paste text box in Custom Commands sometimes doesn’t honor the font and text size used with text. For example if I paste in text in Helvetica it won’t work in Microsoft Outlook for Mac. Also, sometimes it will paste text in different size to what you want to paste into the default font in Apple Mail

If you add a person or company name to vocabulary with a capital letter, dictation doesn’t honor the capital. For example, I have a microphone by a company called “SpeechWare.” I input it into custom vocabulary in this correct format, but Voice Control dictation transcribes it as “speechWare.”

Problem with Delete That in the Mail app

Again on the Mac and the Mail app.  Every time I start dictating into the Mail application, if there is an error in the first few words I dictate and I say “delete that,” the cursor makes a dramatic jump and destroys the signature leaving everything jumbled up. It doesn’t happen if you dictate one word, but if you dictate a few words and then use the “delete that,” it destroys the signature in the email body.

When using Custom Commands and the “Paste Text” option, this does not work in Safari in many text boxes including Facebook and WhatsApp web. This makes it impossible to paste in text automatically into a text box with a custom command created in Voice Control.

Niche issues, perhaps, but important ones

Hughes acknowledges that these might appear to be niche issues that affect only a tiny percentage of Apple users, but says that they are big problems for those who depend on accessibility features.

Disabled people need and want more than the ability to dictate a short “Happy birthday ❤️“ iMessage with a cute emoji. They want to write long essays at college, excel in their careers in employment, run businesses, dictate long blog posts as writers, and post long posts to friends on social media, but the sad fact is dictation in Voice Control simply isn’t up to the job.

It could also be argued there’s a powerful mainstream appetite for improved and more accurate speech recognition on the Mac from people with dyslexia, RSI, and professionals like doctors, lawyers, and surveyors. Make dictation great for disabled users and you make it great for everyone.