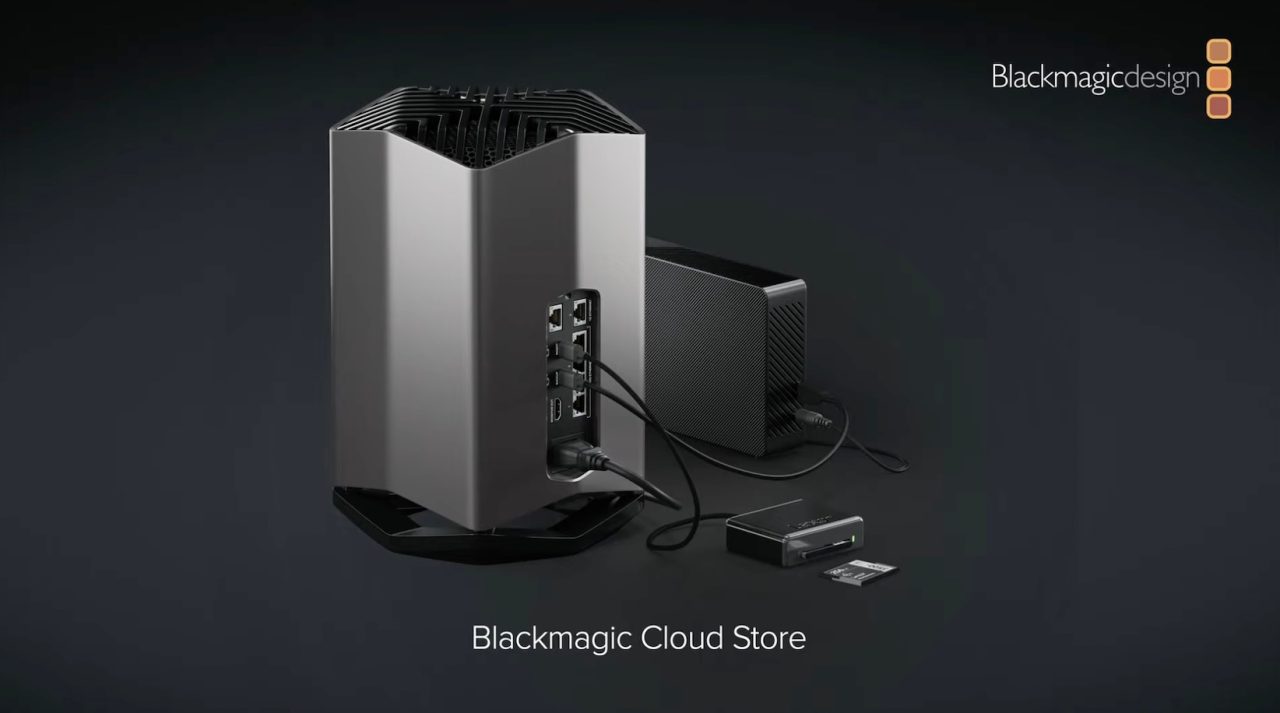 If Blackmagic’s Cloud Store design seems familiar, it’s not just you. The unit features the same design as Blackmagic’s eGPU and eGPU Pro products that it launched a few years back for Intel Macs. Although the units look nearly identical on the outside, the machine’s guts, I/O, and overall capability, as you might imagine, is wildly different.

Priority was also placed on portability. Unlike a traditional NAS machine with extremely heavy hard drives within a bulky enclosure, the Blackmagic Cloud Store has a relatively portable design.

Priority was also placed on noise, or lack thereof. NAS and DAS boxes tend to make noise due to audible fans, but Blackmagic notes emphasis that the unit is quiet. If the Cloud Store uses the same fans as the Blackmagic eGPU, I can attest to its relative silence.

The Cloud Store is far from a dumb machine, as it runs a custom Blackmagic OS; it also features a built-in 10G Ethernet switch with four 10GbE ports allowing you to connect up to four different computers to high-speed Ethernet. And when connecting to slower networks, there are also two 1GbE ports.

In addition to Ethernet connectivity, there are two USB-C ports — one for ingesting footage from a high speed source like a CFExpress reader, and one for backing up the contents of the Cloud Store to an external drive. Finally, there’s an HDMI port for monitoring the status of the Blackmagic Cloud Store via a Blackmagic OS GUI.

The Cloud Store is scheduled to ship in about a month, with the 20TB model priced at a very reasonable $9,995. Keep in mind that this is a real 20TB of usable space, even though it’s configured with RAID 5. This means that there’s actually more storage in these units than advertised due to the RAID redundancy.

But what if that price is out of your budget, or you aren’t working at a large production house? Blackmagic also today launched the Cloud Store Mini with. 8TB of storage. The rack-mountable mini features a single 10G Ethernet port and a USB port that works as a 10GbE adapter when connected to your Mac. Although not as fast as the full-sized model, it still features cooled high-speed flash memory. The Cloud Store Mini launches today for $2,995.

But that’s not all…Blackmagic is also launching the Blackmagic Cloud Pod, which is a BYOD (bring your own disk) setup with 10GbE connectivity and two USB-C ports for connecting up to two disks at the same time. It also features HDMI for monitoring, and 12V DC power input. The Cloud Pod launches today for $395.

Do you use DaVinci Resolve? What do you think about the Blackmagic Cloud Store, Cloud Store Mini, and Cloud Pod?