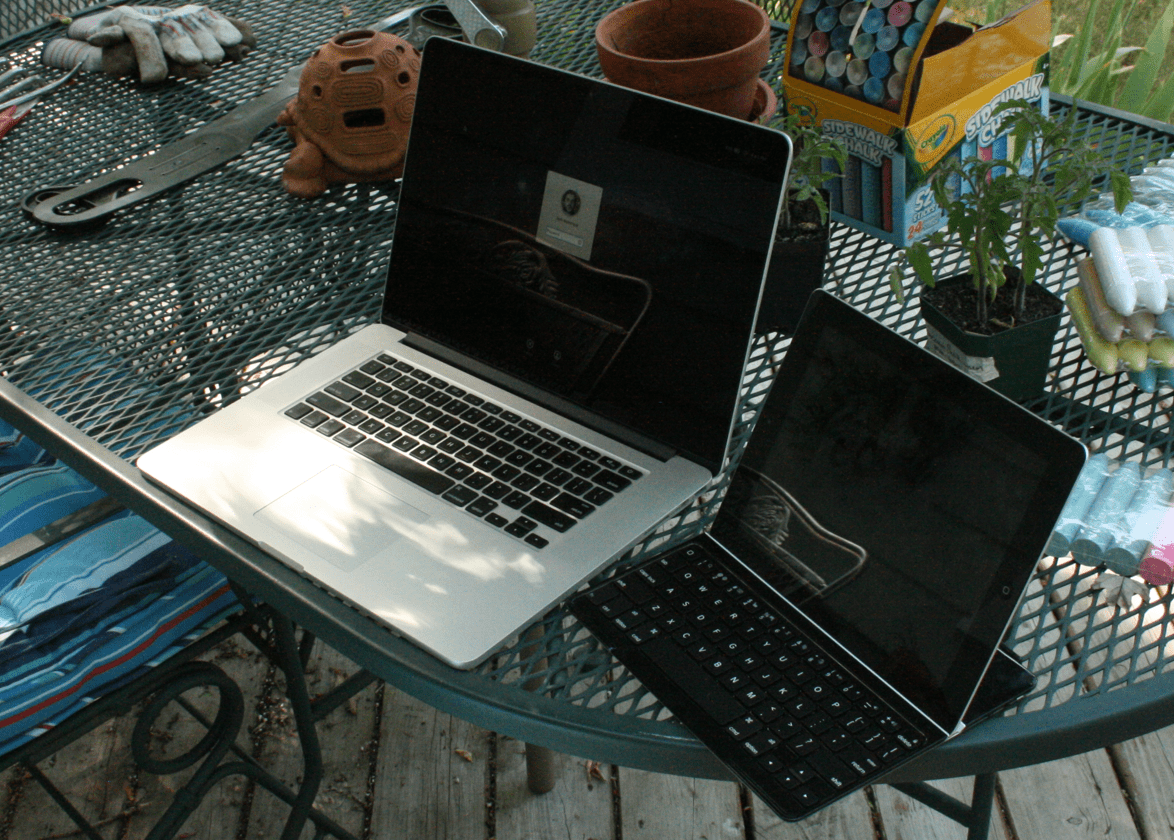 The one standout feature of the Microsoft Surface Tablet in our eyes was the keyboard cover. But is it that great? No one outside Redmond knows because Microsoft did not let anyone touch it at the press event.

But, if you can handle a paltry extra 4mm of thickness with the addition of real keys, an iPad aluminum-matched protective cover, and a built in stand, Logitech already has Microsoft beat in my eyes.

Enter the $99 Logitech Ultrathin iPad Keyboard Cover for iPad 2 and the new iPad. It uses the same magnets as Apple’s “smart” accessories to clip on and activate the iPad, but it is a rigid enclosure that matches the back of the iPad and turns it into the proverbial Apple netbook. It offers screen protection, but the back and sides are not protected. So, you will not want to drop test this setup.

This is not just a repurposed PC/Mac keyboard either. It has dedicated iPad keys across the top including the very useful home button, volume keys, editing keys, and play/pause.

I have been using it since it unveiled two months ago. Here is my take:

I know many people do a lot of creation on an iPad, but I was squarely in the consumption camp just a few months ago. That is more because my 13-inch MacBook Air comes with me everywhere (bed, TV room, car, bike rides, airplanes, train—you name it; I had it). I tried the iPad on many occasions, but I would be reading Reddit or the New York Times in bed or something and would need to make a blog post in WordPress. While the iPad has an admirable WordPress client, it simply is not as good as the desktop web client, especially for uploading and editing images, nor is my glass typing up to snuff when compared to my “real” keyboard skills.

Do not get me wrong; I used iPad for watching Netflix or Hulu, Mint, email, chat, casual web browsing, and many fun games. But compared to my kids, I barely picked up the thing.

The Logitech Ultrathin iPad Keyboard Cover comes in and replaces the Hard Candy cover that I had since I picked up my iPad 2. Pairing via Bluetooth takes just a few seconds, and the keyboard automatically turns off when it is shut via magnets. That alone, is a game changer. Because of this, you can go for days without charging it, and then it is still ready when you open it back up.

The keys are extremely similar to what you are familiar with on a MacBook in terms of depth and feedback. They are slightly smaller than a typical keyboard, but that is not as big a deal as it is on a netbook for some reason.

The Logitech iPad cover fits exactly around the outside of the iPad, and it only has a few noticeable buttons/ports besides its magnetic hinge. It charges via Micro-USB, which you probably have lying around from an old flip phone, camera, or other peripheral. Logitech includes a USB charger. There is a manual on/off switch, which I have never used (it turns off when closed automagically). In addition, a pairing button helps if your iPad does not sync automatically when awakened. In my experience, I never needed it besides the first time I set it up.

In short, I found myself more likely to bring the iPad on short trips instead of the MacBook Air. Writing documents, medium or longer emails and basic chatting are much easier. I have confidence that I can handle some quick posts or work should it arise. In fact, I am writing this review on the Logitech keyboard now.

The problems with the keyboard are few…and that is mostly because the iPad really is not designed for use with a keyboard (these are sold at the Apple Store, so Apple obviously is not opposed to the idea). When you are typing and want to move to another place in your writing, the inclination is to reach for the touchpad or mouse. But you actually have to lift your fingers and go to the display. Also, the materials on this product have held up incredibly well, but they are plastic. So, they are not going to take a big drop. As you can imagine, the piano-gloss keyboard does need a wiping every once in awhile (cloth included). And the back, though it looks like an iPad, is plastic too. Finally, it is also more expensive than bargain keyboards that can be as low as $20 to $30.

However, these are small concerns. If you are going to throw a keyboard onto your iPad, grab yourself this Logitech Keyboard Case.

The only other keyboard case that I would consider a close second is the Zagg.

Get it at Amazon and other fine retailers for $99—highly recommended (4.5 stars from reviewers).