comScore: iOS gains ground on Android stealing US marketshare away from other players 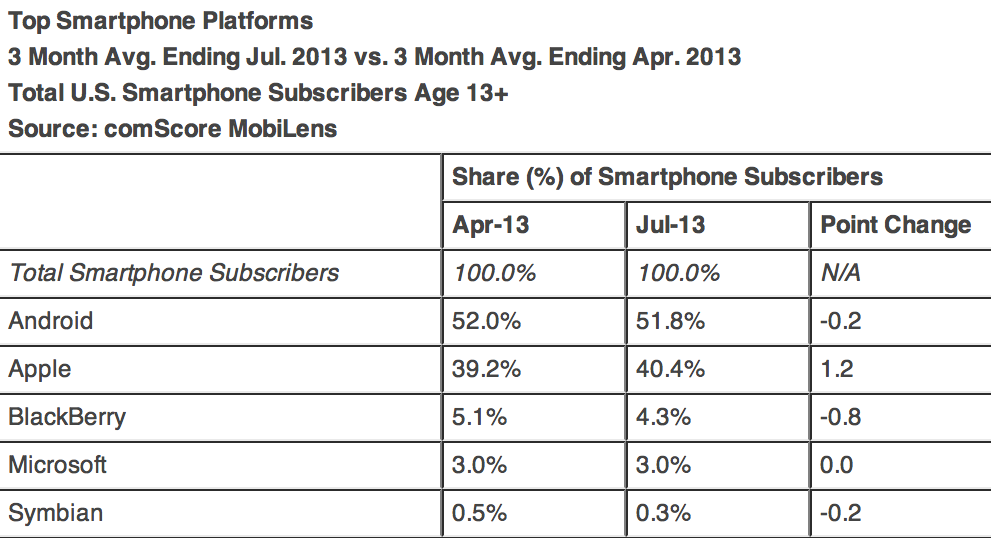 comScore has released its US smartphone subscriber study for the three month period ending July. Reflecting similar observations by Millenial Media, iOS continues its ascendancy in the US market. comScore computes its marketshare figures based on active subscribers, which is generally seen as a more reliable representation of market trends than web usage traffic, which is what Millenial uses.

comScore reports that iOS was the only platform to show positive growth, rising 1.2 points from 39.2% in April to 40.4% in June. In comparison, Android fell 0.2 percentage points with even larger decreases experienced by BlackBerry which dropped from 5.1% to 4.3%. Windows Phone’s share remained constant at 3.0%. Looking at comScore’s manufacturer marketshare statistics, Samsung grew the most with an increase of 2.1 percentage points across the three month period. Besides Apple, Samsung was the only manufacturer to increase their share of US subscribers. All other manufacturers saw their share decrease, with HTC and Motorola dropping 0.9 and 1.4 percentage points respectively.  As a result, Samsung and Apple combined are now responsible for about 65% of all smartphone subscribers’ devices.

Despite Samsung outgrowing Apple in manufacturer share this quarter, Apple remains the number one manufacturer, capturing 40.4% of the market.