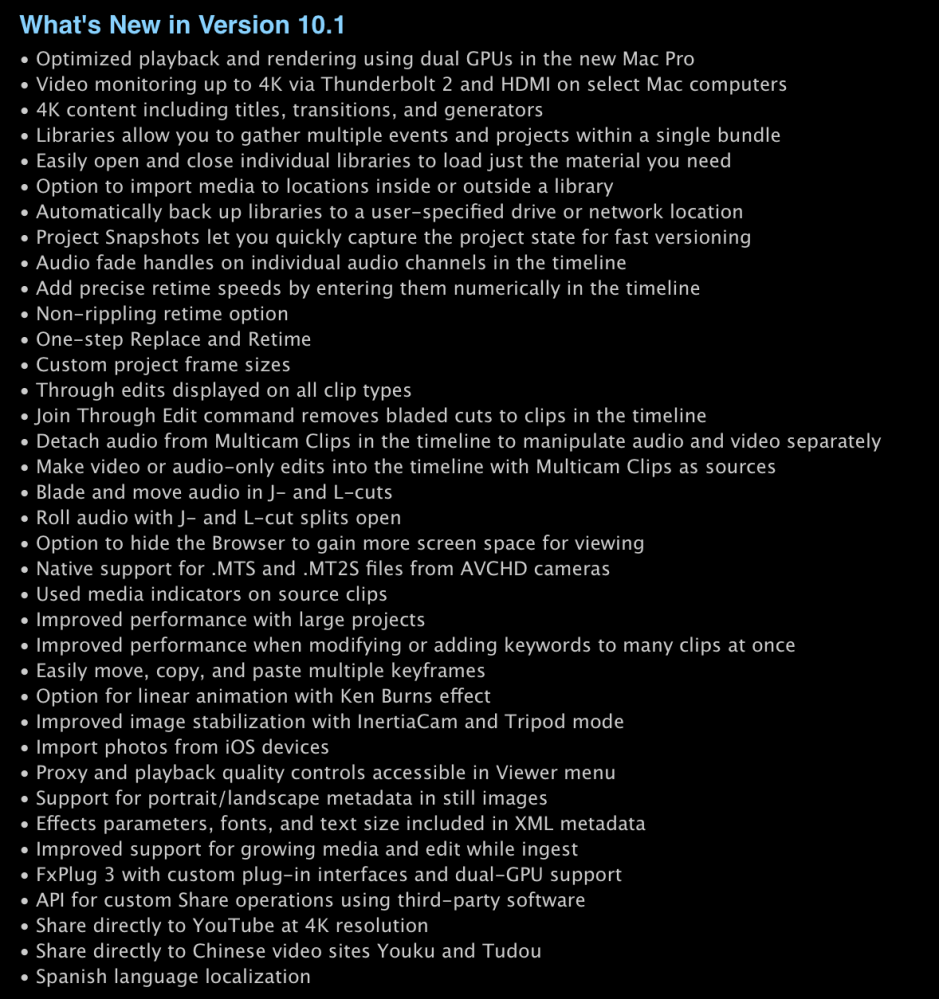 Alongside the release of the new Mac Pro, Apple has updated Final Cut Pro in the Mac App Store to take advantage of the machine’s immense raw processing power. Specifically, Apple says that playback and rendering has been optimised for the Mac Pro’s dual GPUs.

Final Cut 10.1 also adds 4K support, including monitoring across Thunderbolt 2 and HDMI displays as well as 4K titles, transition and generators. The update also adds a whole slew of other minor features and changes to the modern (if controversial) video editing suite.

Libraries enable better organisation, combining multiple events and projects into a single bundle. Closing and opening library keeps only the files and metadata in memory that you actually need for the current project, providing both performance and workflow organisational improvements. Media can be imported optionally inside or outside a library. A library can be backed up to a drive or network location too.

Final Cut also adds audio fade handlers for each channel, the ability to add accurate retime speeds by entering them numerically (rather than with a slider), non-rippling retiming and a one-step ‘Replace and Retime’ feature to make the whole process streamlined and straightforward.

For multicam, 10.1 allows editors to detach the audio from each feed and edit video and audio independently to allow for some more advanced editing effects when using multicam, such as J and L cuts. Keyframe management is also improved with the addition for copy and paste support.

In addition, Final Cut Pro adds an API for custom Share operations that will help optimise some people’s workflows to certain endpoints as it will make exporting to even more services (beyond what Apple usually provides) a very simple operation.

The update notes also mention improved performance with large projects and when modifying keywords across the project and a Spanish language localization.

Final Cut Pro is available for $299 in the Mac App Store. As always, the update is free for existing customers.