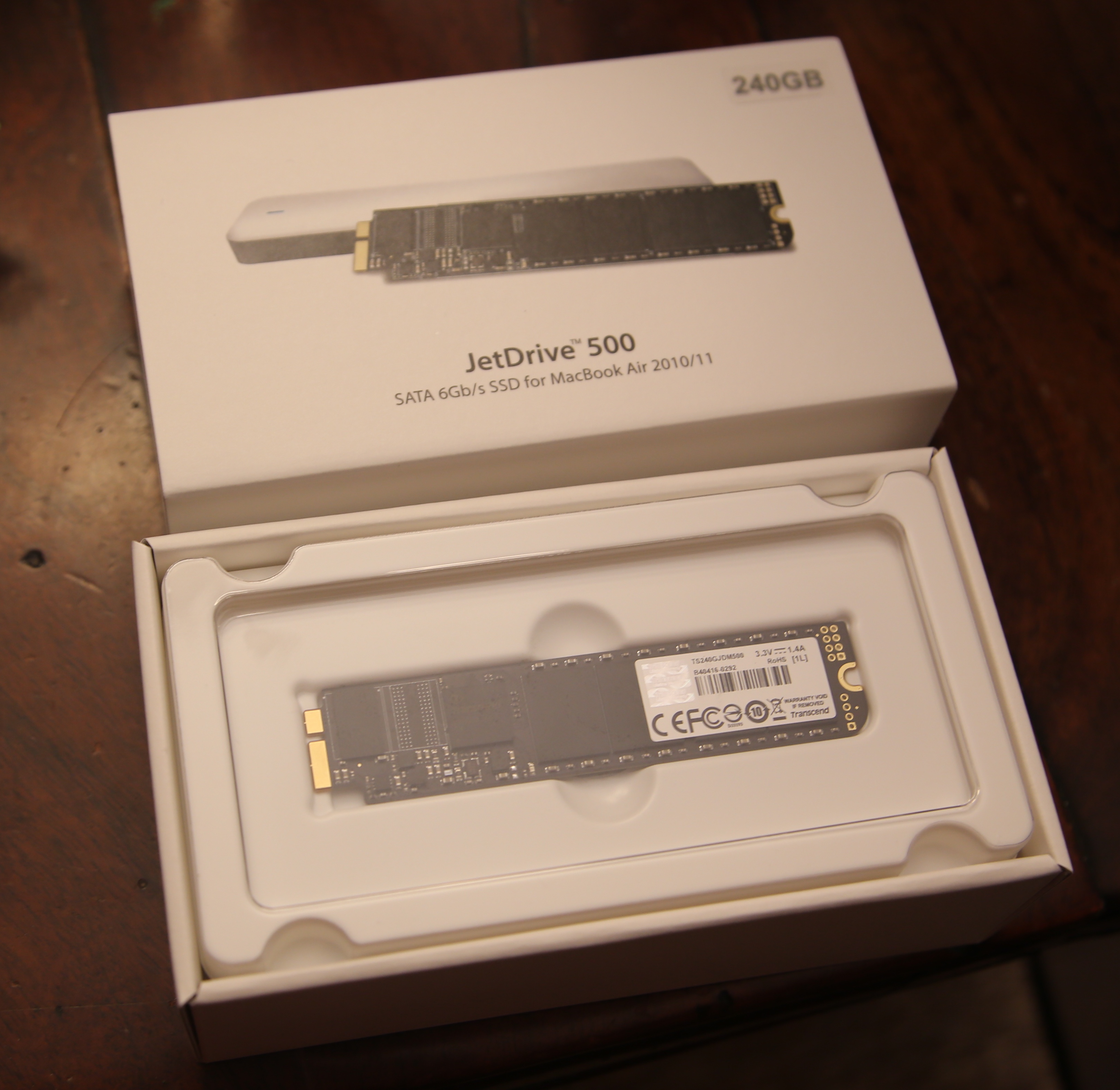 My wife’s 128GB MacBook Air from 2011 has been “full” for about a year now and every few months I have to run Cocktail to remove some caches, etc. and keep it going for a few more months. Luckily, it is a Samsung drive and not the slower Toshiba drives that came with these MacBook Airs.

The Transcend packaging is extremely nice. The first level you’ll see your new SSD on top. Remove that and you’ll see the enclosure you’ll use to transfer data and which can eventually turn your old SSD into a big fast USB3 stick. One more level down, you’ll see the Torx screwdrivers you’ll need, the “paltry” instructions and cable for the enclosure. 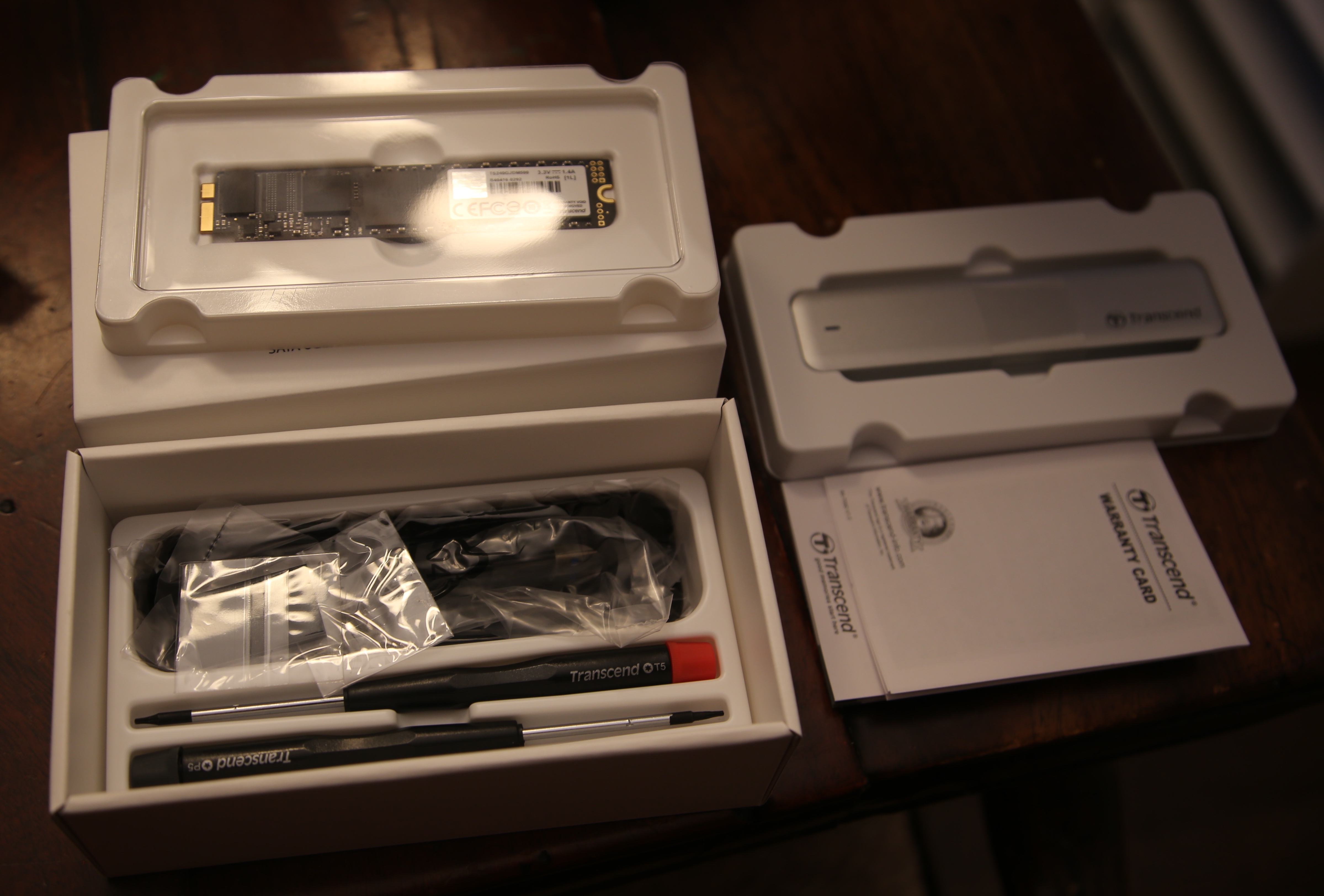 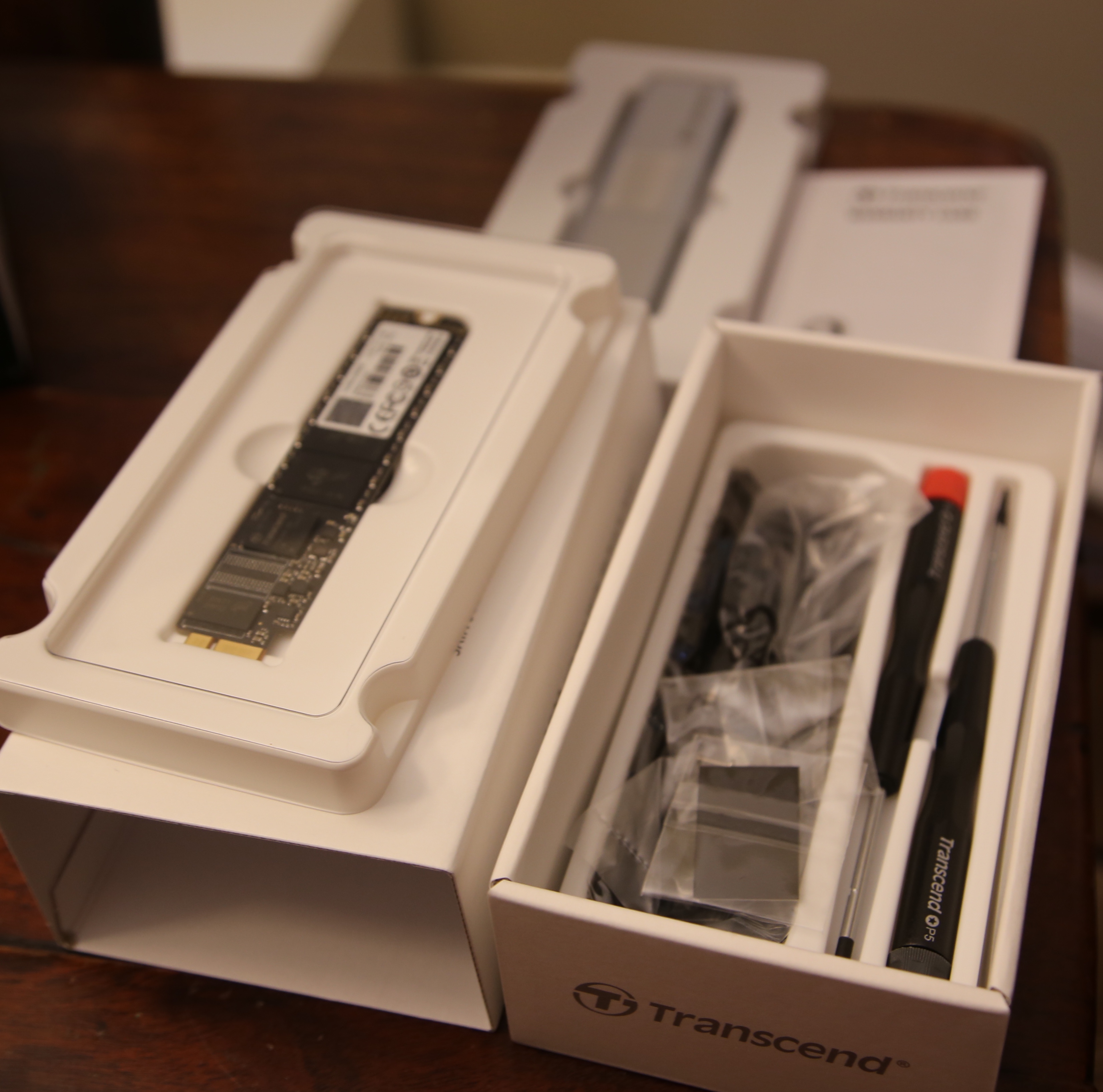 The first step is hooking up the Transcend SSD to the USB3 cable with the enclosed adapter. 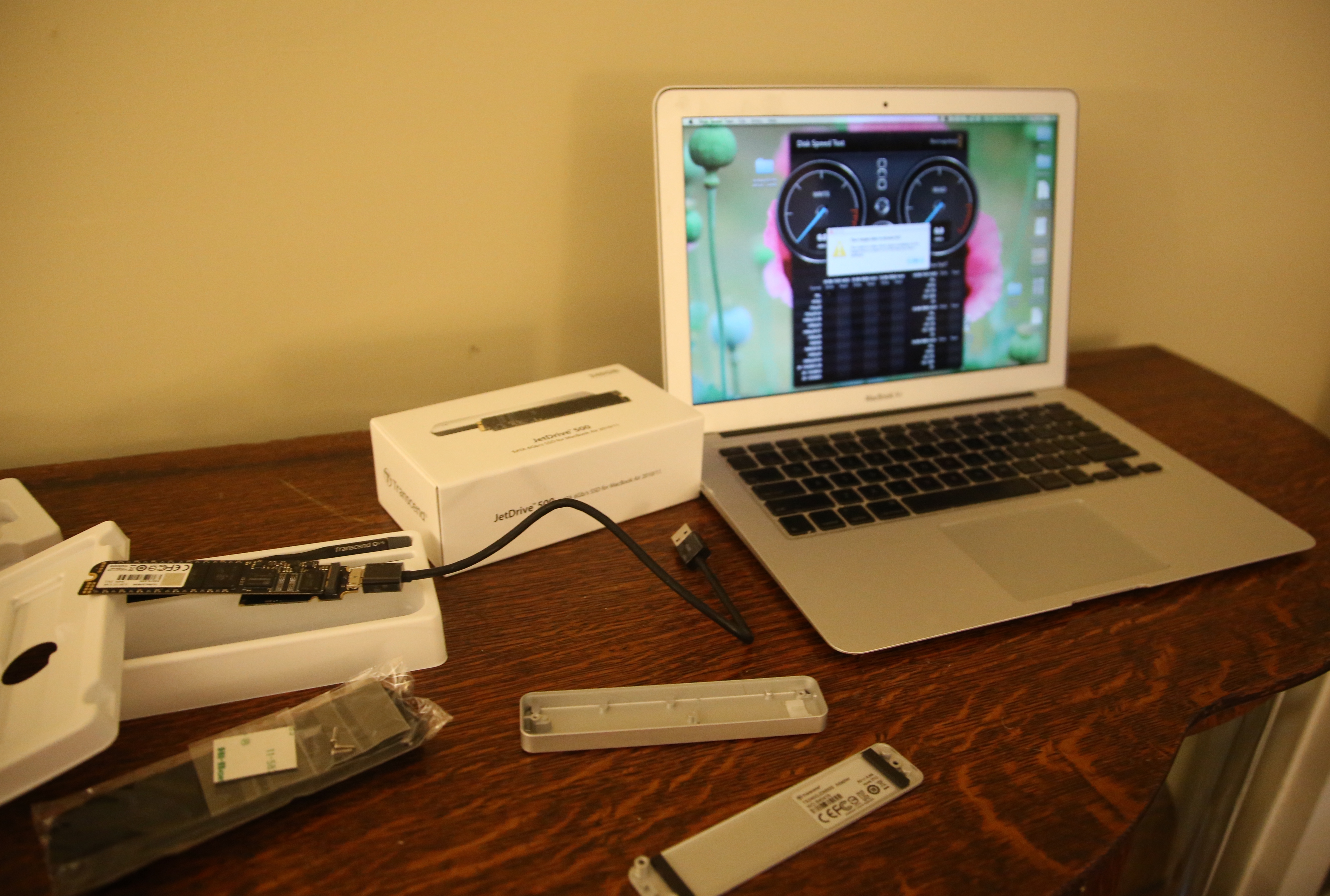 A quick BlackMagic speed test to set a baseline for the upgrade. 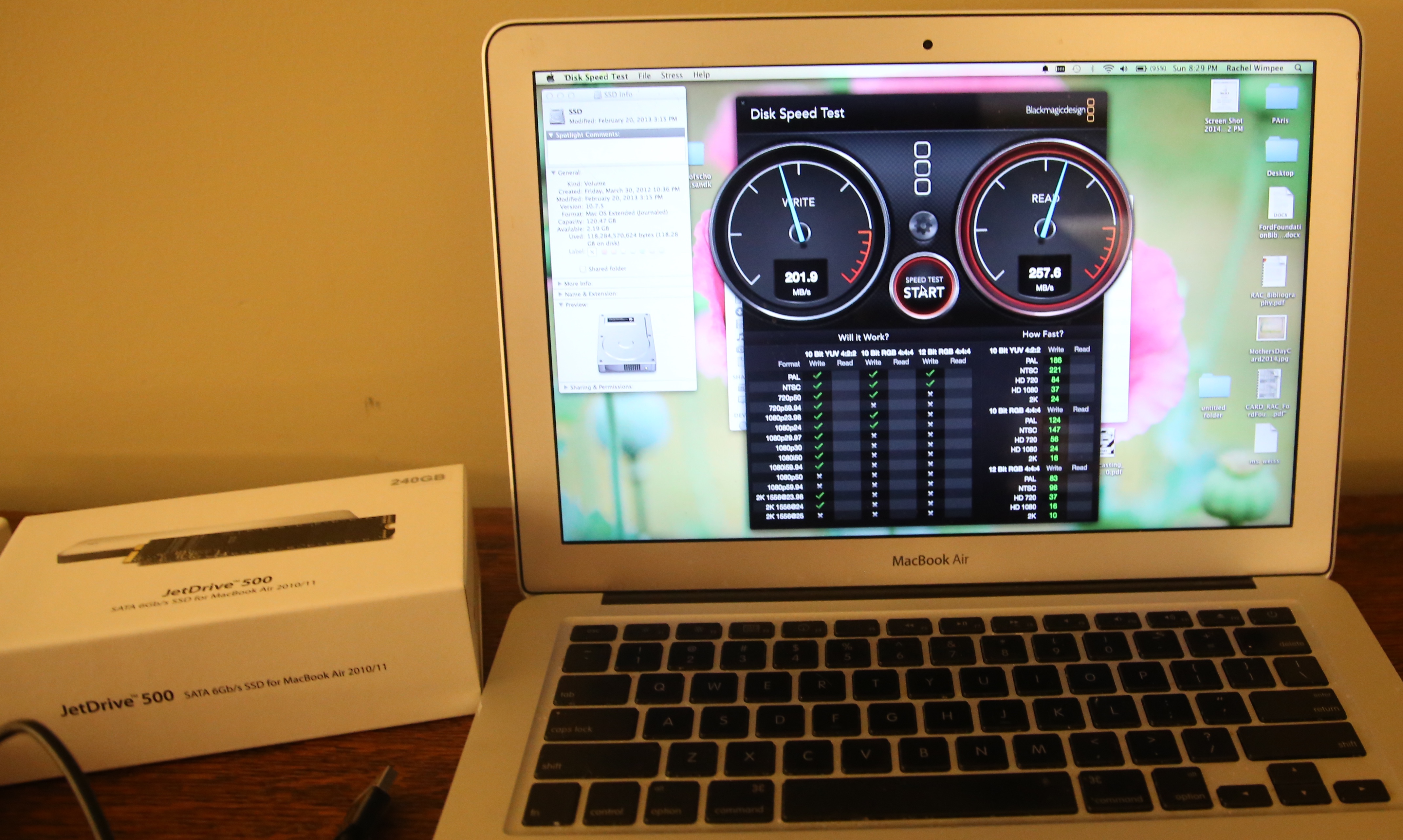 Then reboot the computer from the recovery partition. From there, go into Disk Utility. 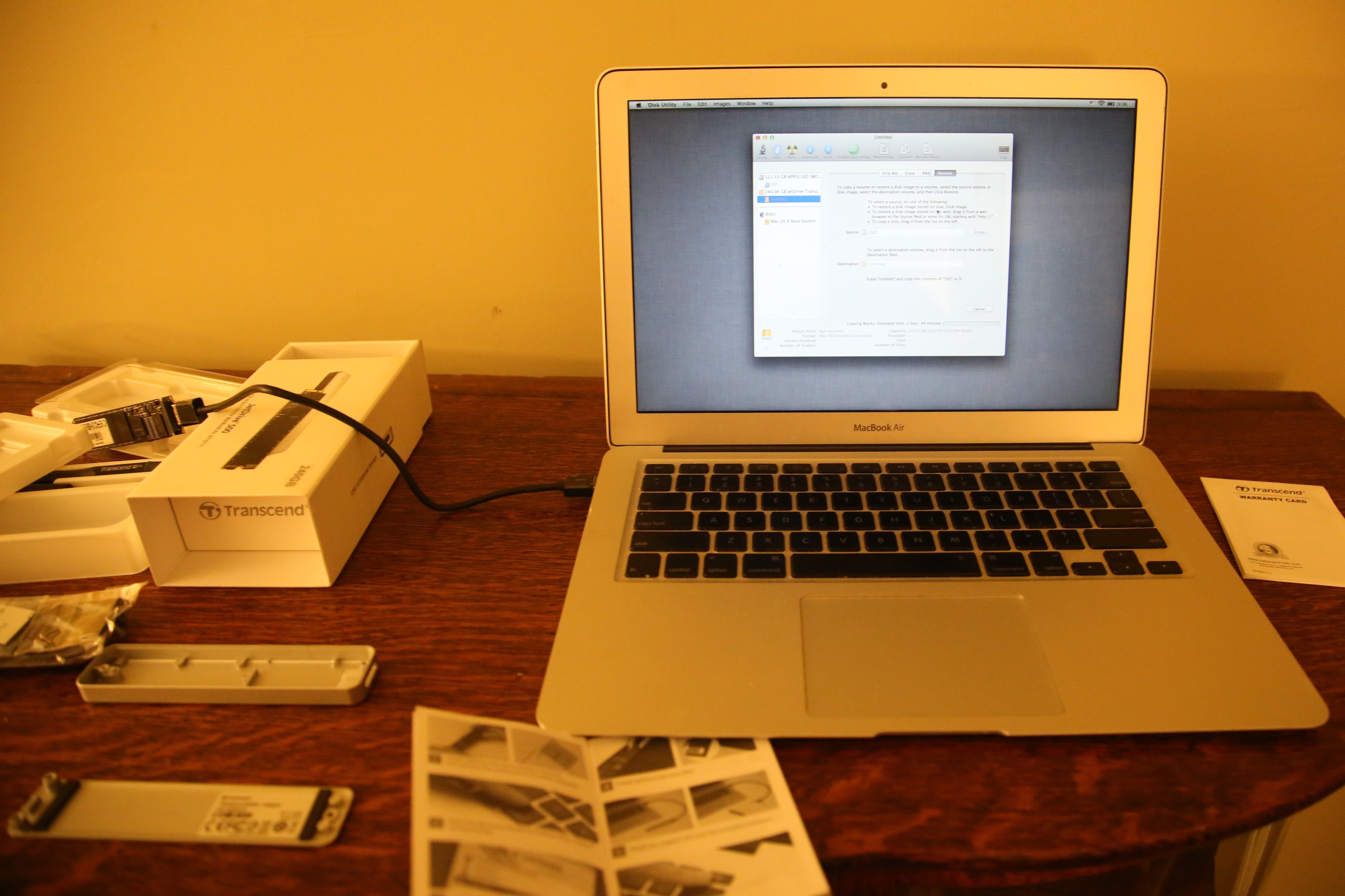 The cloning of the drive actually takes some serious time because the 2011 MacBook Air is USB 2.  A very full 128GB SSD took about 1:45 to transfer to the new Transcend SSD with the USB 2 being the big bottleneck. USB 3 shouldn’t take much more than 10 minutes for the same amount of data. 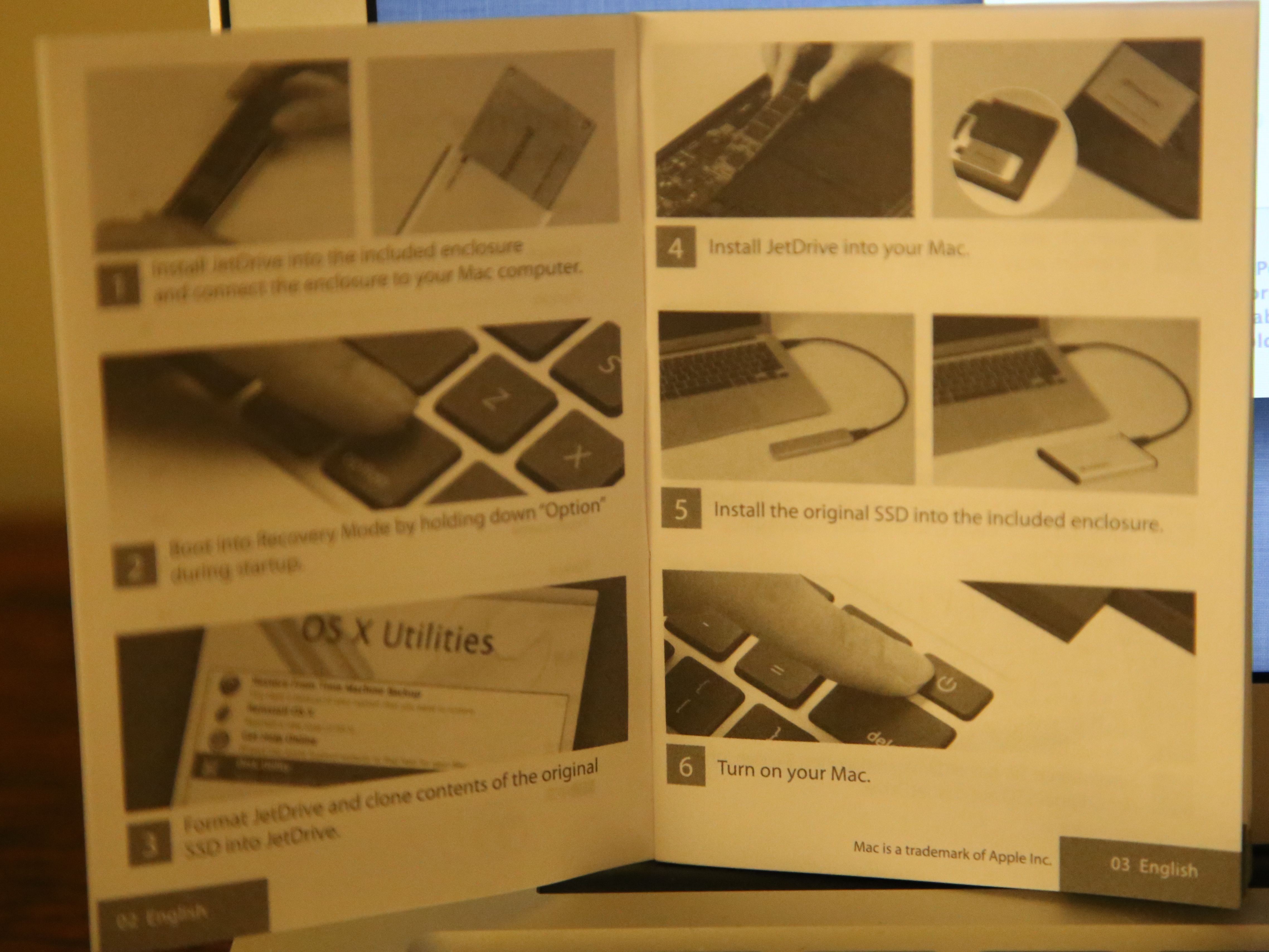 The instructions provided are pretty sparse (just the way I like them). These 2 pages of a small world language book are it! 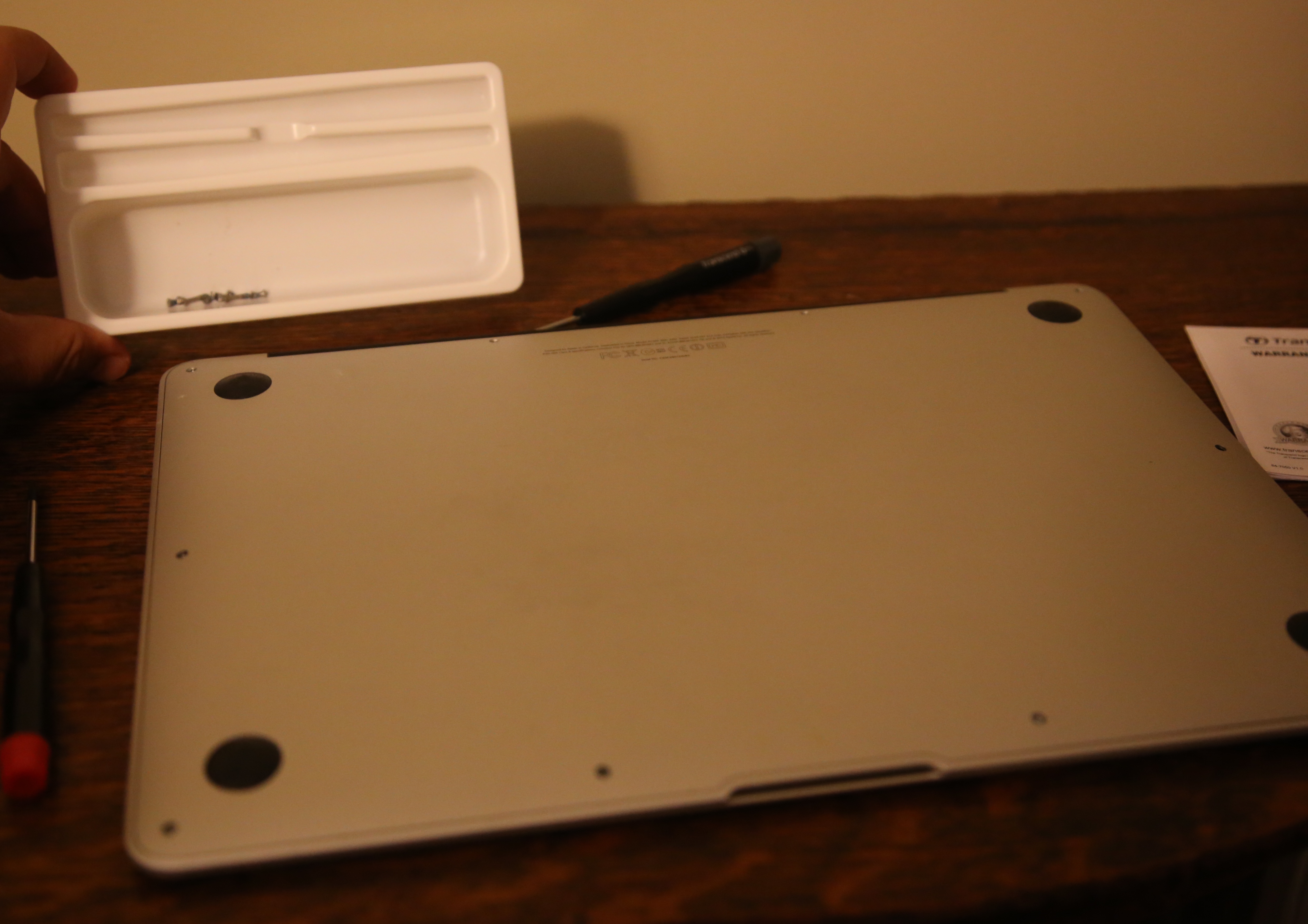 Now comes the hardware part of the journey. You’ll want to remove all of the screws on the bottom of the MacBook Air with the provided Torx screwdriver. Pro Tip – the longer screws are the ones in the top middle near the hinge. Don’t forget that like I did. 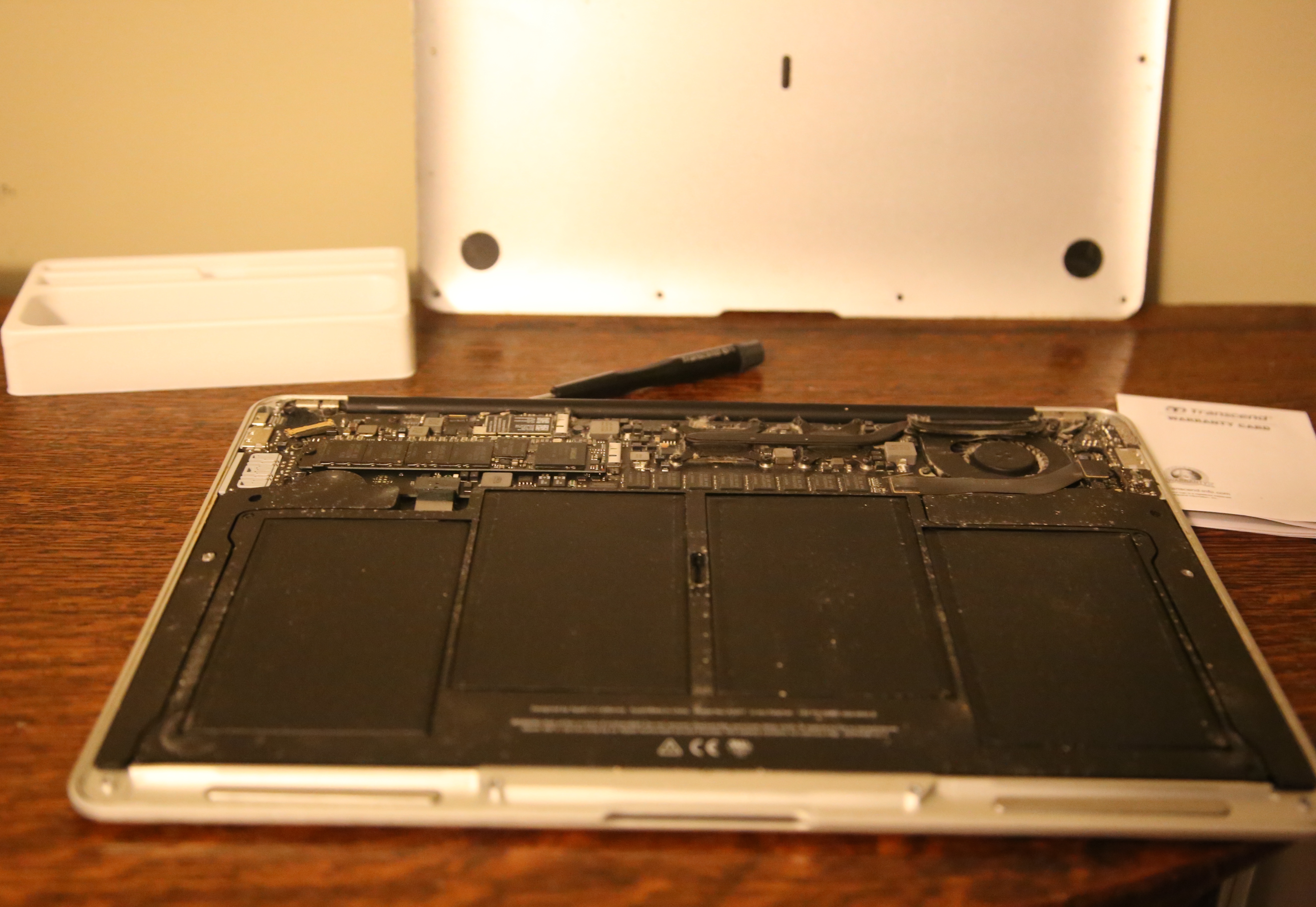 The inside of the MBA was surprisingly dusty. I’ve heard that this is mostly dead skin which gives me the willies. Power through this and locate the SSD on the bottom. It will either be Samsung or Toshiba and will have a Black Torx Screw holding it in. Remove the screw and remove the card. Then pop in your new cloned Transcend SSD and replace that screw. 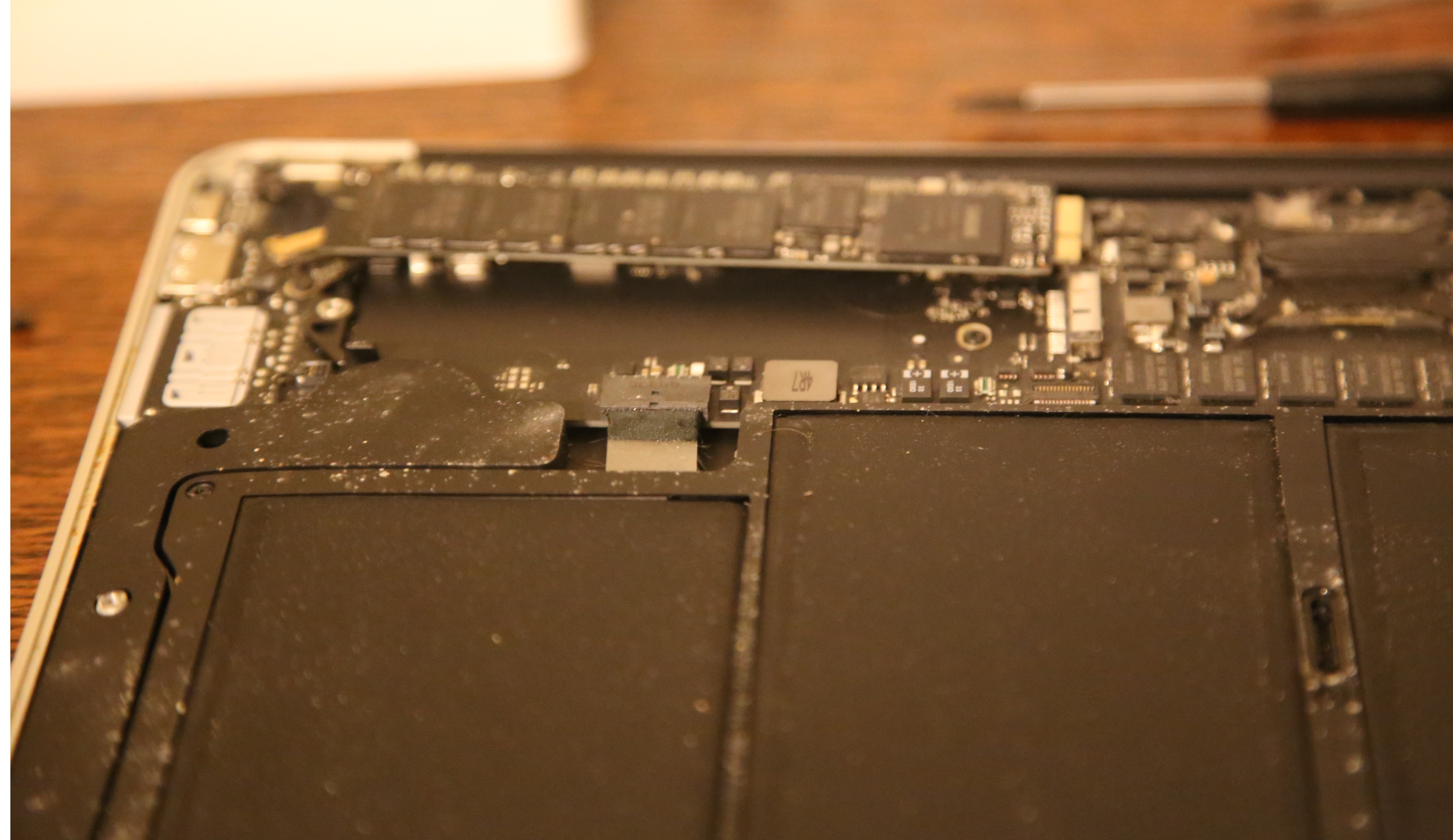 Compare the two SSDs, Samsung above, Transcend below: 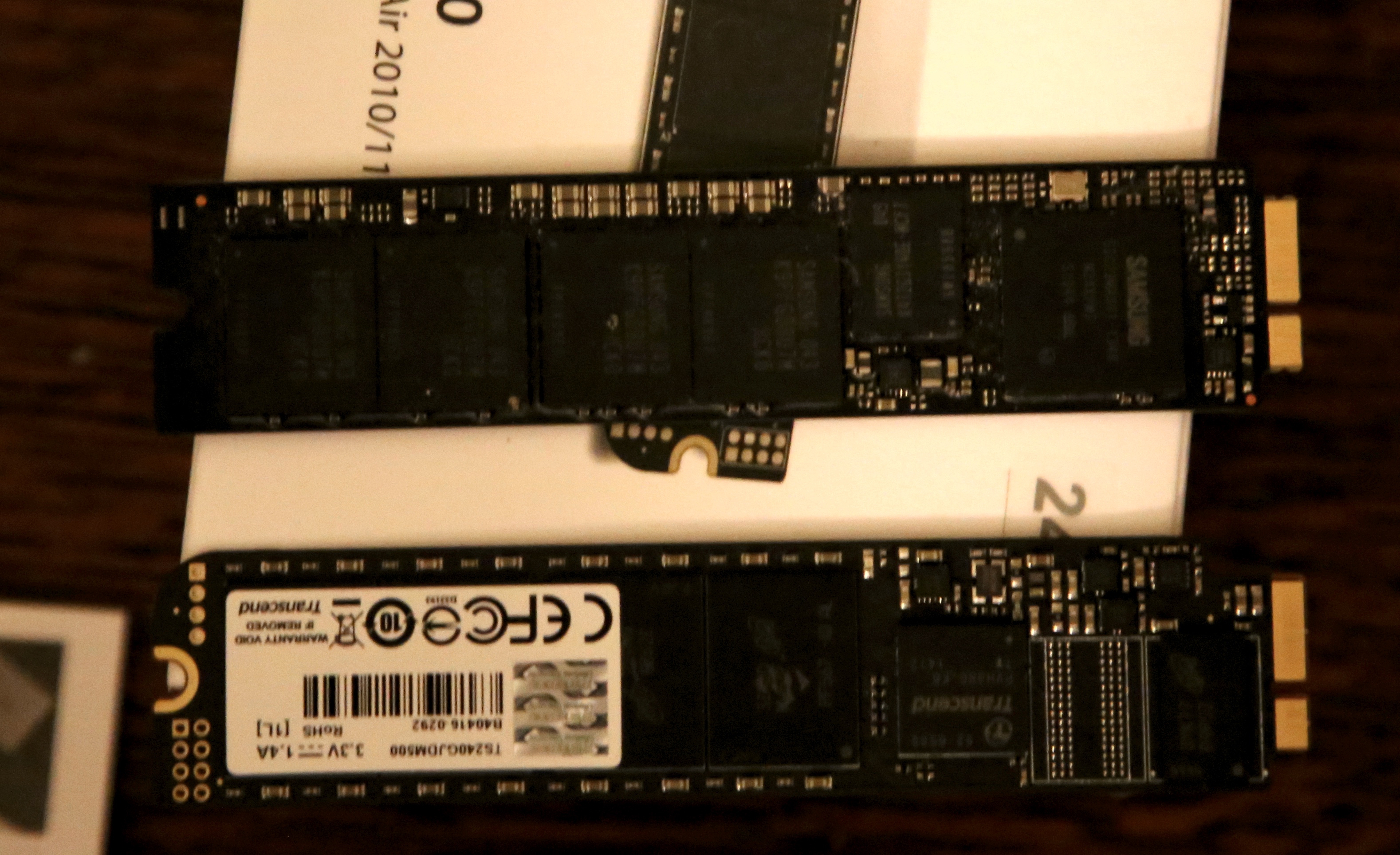 At this point, you might as well pop your old SSD into the enclosure and secure it with the enclosed 3 screws. Then put the back of your MacBook Air back on and power it up!

The first boot up will take a few minutes longer than you are used to. The EFI Firmware has to find the new drive and all kinds of other small things are happening. Also it will be slow at first while spotlight indexes itself again. From there, everything should behave like normal. My wife’s reaction was that the MacBook was much much faster.  However that speed was likely due to having some free space rather than actually read/write speed.  A BlackMagic test shows that its raw speeds were actually significantly slower than the default Samsung. 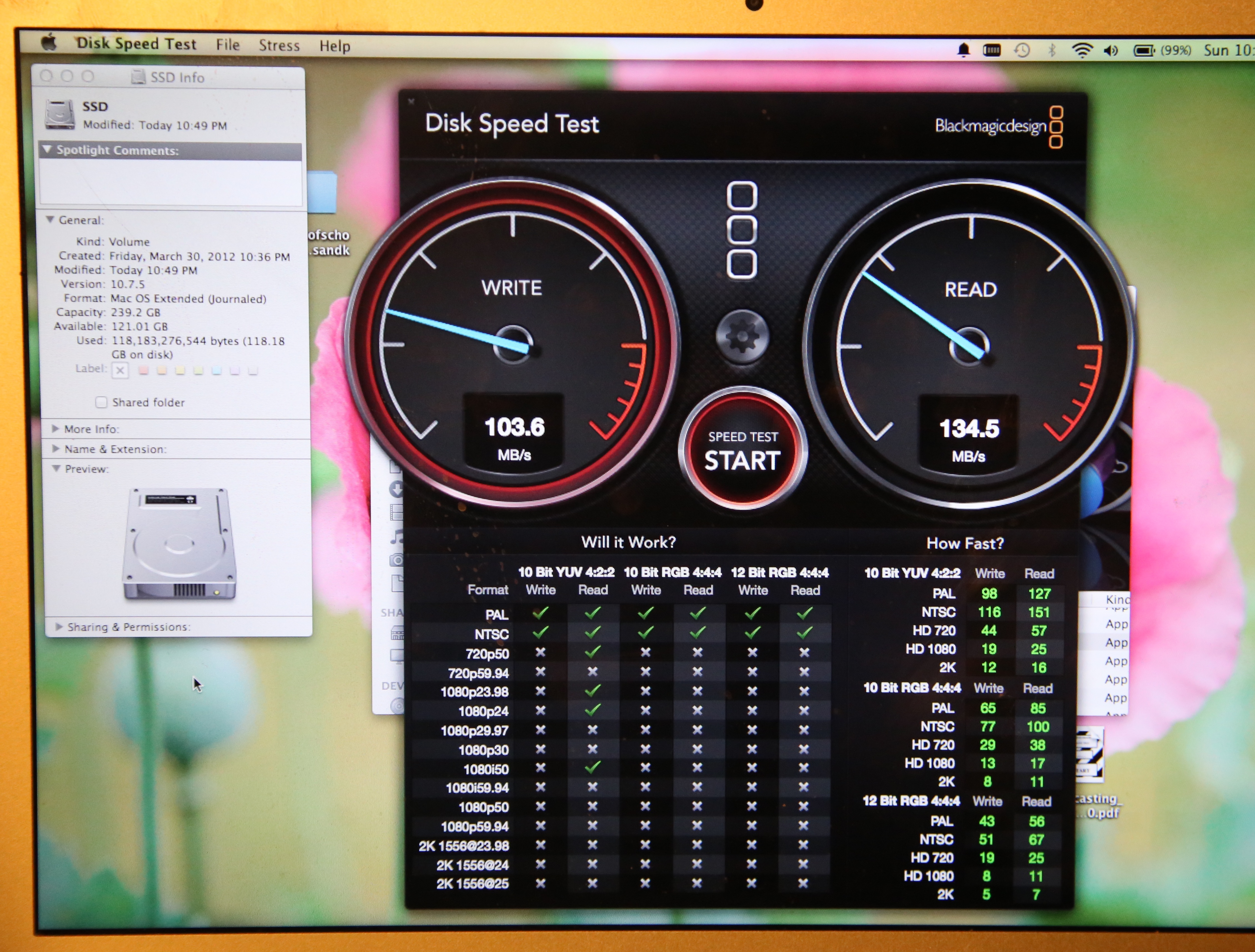 However, if you download Transcend Toolbox you’ll get speeds much closer to the theoretical limit of SATA3. JetDrive Toolbox monitoring software leverages S.M.A.R.T. technology to analyze its health status. Additionally, it can enable TRIM support for your JetDrive in OS X, maintaining optimum write speeds and maximizing the lifetime of your SSD. 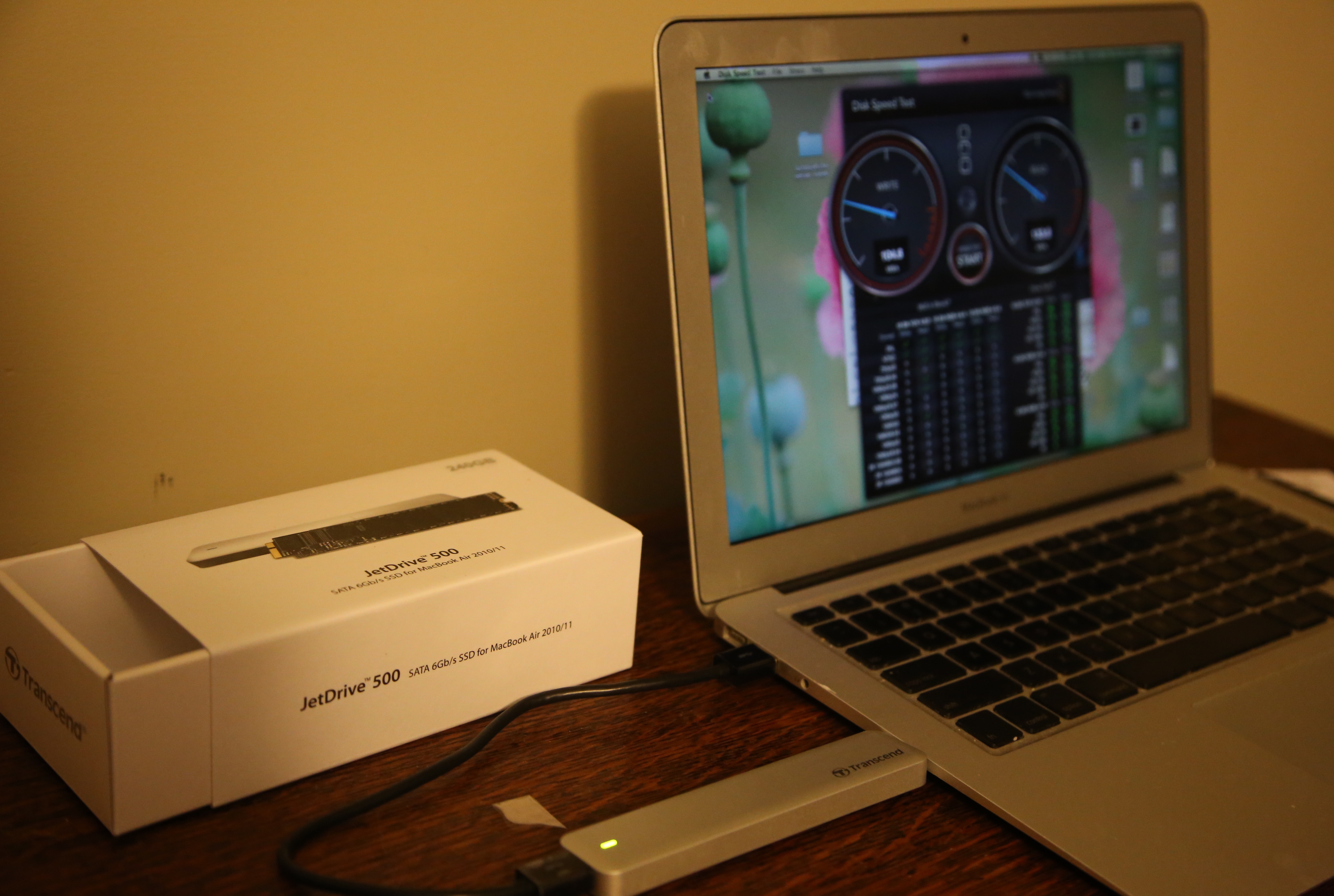 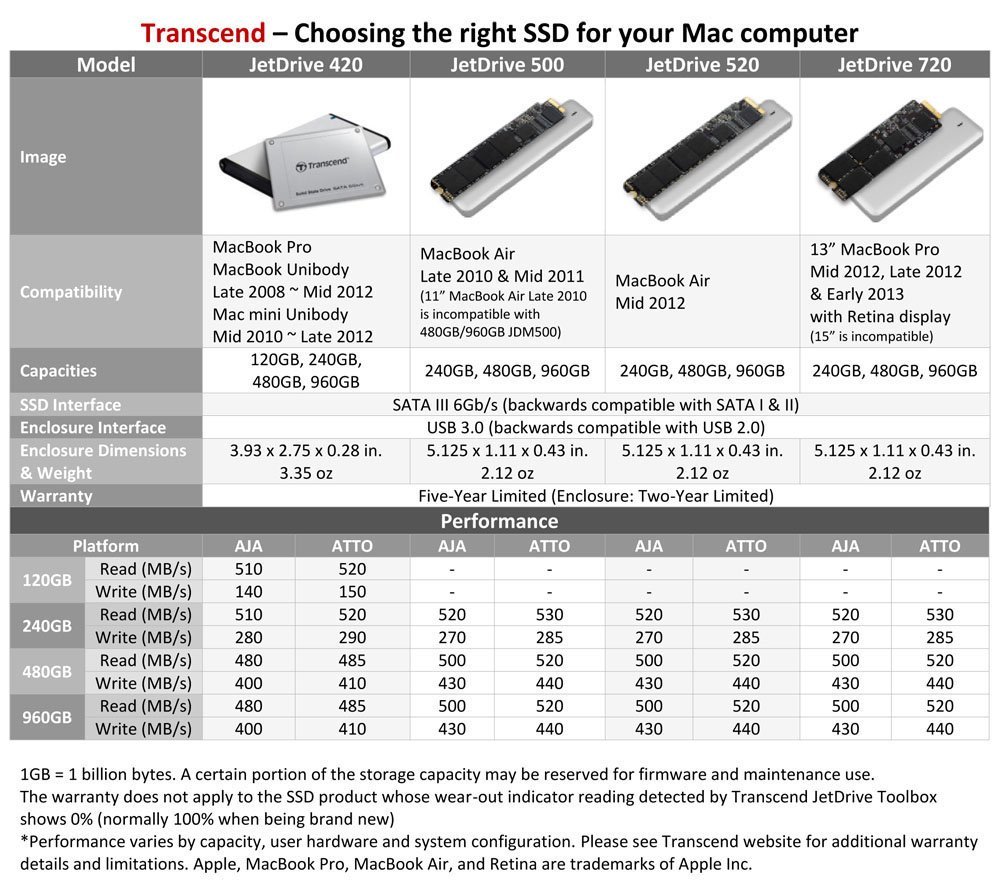 The package includes all the tools you need: 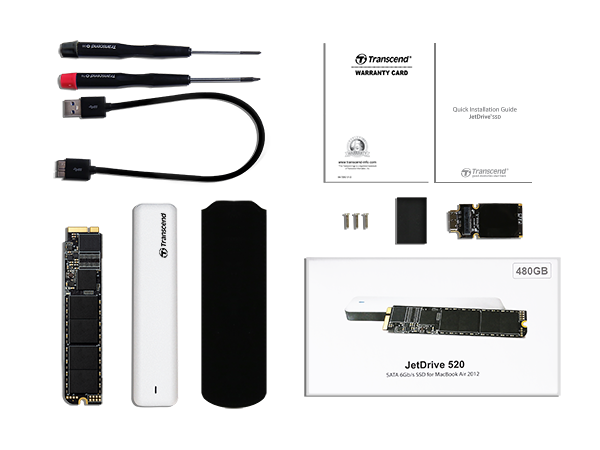 Find the right model for your Mac below1. 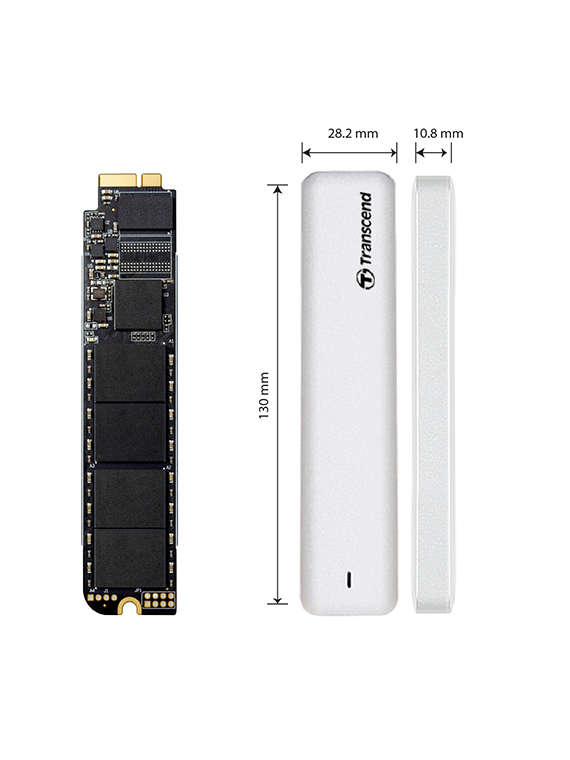 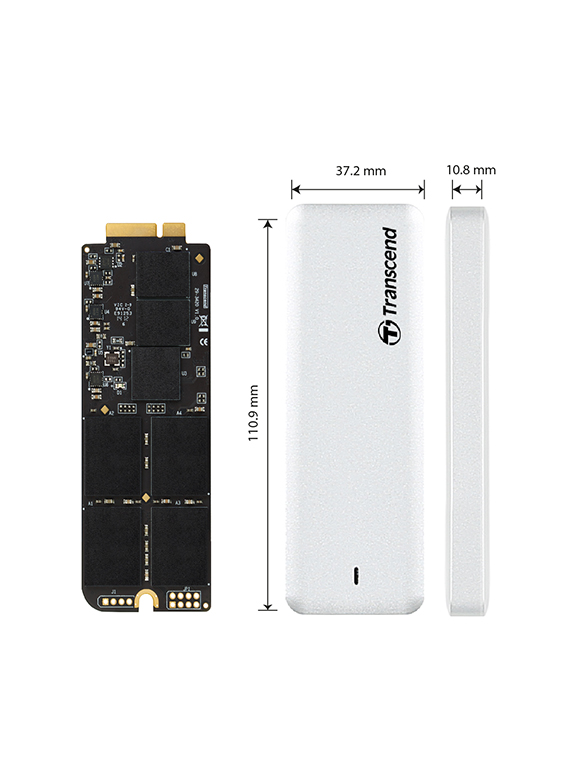