Review: T-Mobile’s $25 Personal CellSpot is a no-brainer for Magenta customers and handover Wifi calling may even win some converts

In all of the hoopla over the new iPhone 6/Plus, T-Mobile in the US and EE in the UK got themselves a pretty big exclusive (for now). T-Mobile has been offering Wifi calling for years but it’s recently come to the iPhone – and with the iPhone 6 and 6 Plus, gets even better with cell/wifi handover. (T-Mobile partnered with Gogo to enable texting and voicemails on participating airline journeys as well).

Wifi calling, for some, may be the type of feature that makes or breaks a carrier relationship. With it, you can make calls anywhere there is a wifi signal. That means basements, country homes and even foreign countries are all now open to making and receiving calls from your carrier phone number…

This isn’t just any call quality either. This is HD voice (if the other party also has it) and it sounds as good as any call you’ve ever made on your mobile device. Calls into Google Voice and Skype also sound pretty amazing.

The iPhone 6 and 6 Plus and the latest Android phones now have new radios that allow a handoff between Wifi and Cell towers so that if you are coming home from work and happen to go into your basement, your call won’t drop. The radios on the iPhone 5/s/c won’t hand off, you’ll need to redial. For a family like mine, this is the type of feature that will allow us to cut the copper POTS line once and for all. Not only was our basement off limits to seemingly every carrier, but so was the back side of my house which included my office. T-Mobile sent me their ‘free’ (read: $25 deposit that you’ll never want back) Personal CellSpot Router (you can buy without T-Mobile account for $99) which actually is just an ASUS AC1900 Router with some T-Mobile stickers and an almost invisible T-Mobile branded firmware. You have to be a T-Mobile customer to get one of these and frankly at a retail price of $200, it is a pretty compelling offer (read: no-brainer).  To be clear, you don’t need this router to make Wifi calls or even do Wifi handoffs: Wifi calling works over any old wifi connection. But T-Mobile wants you to have the best router out there and it is hard to find more gushing reviews than you do from this one. The specs on the AC1900 router from ASUS:

I didn’t have time to benchmark everything about the router, but it if you’ve ever configured a non-Airport wireless router, it is pretty easy to set up. The web interface: 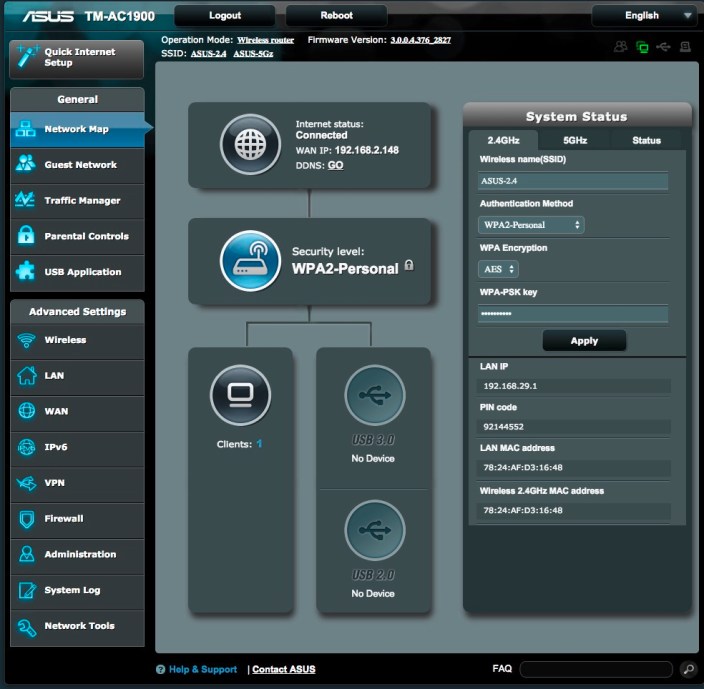 T-Mobile said they’ve done some fine-tuning on the router to help with QoS (to make sure phone call packets get the highest priority). This means that if your router is saturated with Netflix/Gaming/YouTube/Torrent/etc traffic, your calls will still sound as good as always. From the web interface, the configuration looked standard (below) and I wonder whether it screws up T-Mobile’s behind the scenes QoS stuff if you mess around with this. I didn’t try. Some of you might be concerned that T-Mobile may use your connection to hook up your neighbors with service. T-Mobile told me that currently, there is no plan to do so. You have to let people on your Wifi to do this by giving them your password. If T-Mobile did something like this in the future and you didn’t like it, you could throw your router in a box and send it back to get your $25, but I genuinely don’t think it is a concern.

One downside of Wifi calling is that it counts against your phone’s plan minutes just like AT&T/Verizon/Sprint charge you minutes for using a home Femtocell. On the surface, this seems douchey because you are using your ISP after all but T-Mobile does have to route the call and handle voicemail (and you are getting a “free” router you ingrate). Most T-Mobile customers will have unlimited minutes so I don’t believe this is a big concern.

So I didn’t actually try Wifi handover on an iPhone 6 or 6 Plus because mine is somewhere between here and China. But T-Mobile was nice enough to send along a LG Flex (jeez, that thing is huge) which has the same type of handoff radios as the iPhone 6/6 Plus have. I can confirm that on the T-Mobile iPhone 5s, wifi calling works well. T-Mobile says that every smartphone they sell will have Wifi compatibility.

I can report that the radios work as advertised. I was able to make a call from down the street and walk into my house (where the phone picked up the Wifi of the ASUS router) and continue the call as I lost T-Mobile service in our downstairs bathroom. It all works pretty seamlessly and you can pretty much “set it and forget it.” Except you don’t even really have to set it.

The ASUS router is insane in its reach. I live on about 4 acres and currently have 4 routers covering the property (Apple Airport, DLink, Linksys and Verizon Actiontec). The ASUS somehow covers all but the corners of the 4 acres. I’ll update this post once I get my iPhone 6 with some screenshots of how that works.

If you are a T-Mobile customer, go ahead and drop the refundable $25 on this router. It is worth it. It is likely stronger than your current router and will extend your signal not just for Wifi calling but also for other devices in your house. It can even be combined with an Airport (though I’m not sure the extra hop is worth the signal strength improvement). The ASUS AC1900 is a top-of-the-line wireless router that gamers and other high end wireless users often pay $200 for even if they aren’t using the Wifi calling.

As far as T-Mobile’s Wifi calling feature, it is one of those “game changers,” and as cliché as it sounds, yet another example of John Legere’s T-Mobile cornering the market on carrier innovation. Sprint and AT&T have already promised Wifi calling in the future but as we know, carriers often take their time when enabling features. AT&T for instance disgracefully took years to implement Apple’s built in Wifi hotspot and even disabled Facetime for many customers while it “figured out” the built-in IP technology.

I’m not oblivious to the fact that T-Mobile’s network isn’t as widespread as Verizon or AT&T. It clearly isn’t. But by opening up their network to Wifi calling early and indeed pioneering the practice and indeed forcing the other carriers to do so, T-Mobile has in many ways evened the coverage playing field and, more importantly, done right by their customers.

Enables every T-Mobile customer and smartphone to call and text over any Wi-Fi connection for seamless coverage where no carrier network reaches – even at 30,000 feet

San Francisco, California – September 10, 2014 – Get ready for a whole new way to think about mobile coverage. T-Mobile (NYSE: TMUS) today rewrote the rules of wireless again with Un-carrier 7.0 “Wi-Fi Un-leashed,” breaking several major announcements that together deliver coverage where no cellular network has gone before.

With every major smartphone maker adopting it, Wi-Fi calling and texting has reached a tipping point, and T-Mobile is getting 100% behind it as only the Un-carrier can – to deliver unprecedented coverage to its customers to places where no cellular network can reach.

“Wi-Fi Un-leashed is a game changer.  This is like adding millions of towers to our network in a single day,” said John Legere, president and CEO of T-Mobile. “The difference between us and the traditional carriers is that they’ll do everything they can to make more money off you. We’ll do everything we can to solve your problems, and today, that’s about uniting Wi-Fi with our data strong network for unprecedented coverage.”

In contrast to the carriers, who lock customers inside walled-off, proprietary networks to monetize them, T-Mobile has taken a typically disruptive Un-carrier approach with “Wi-Fi Un-leashed” by tapping every available technology to deliver coverage in places unreachable by any cellular network – and by making it incredibly simple.  There’s no app to install or separate IDs to remember.  Just use your phone.

In addition to enabling T-Mobile customers to use any public or private Wi-Fi connection they can access like a T-Mobile tower for calling and texting, the Un-carrier has rolled out next-generation Wi-Fi calling and texting on its network.  This new technology is designed to deliver high-quality HD voice, fast call setup times, fewer dropped calls and seamless voice coverage between T-Mobile’s nationwide Voice over LTE (VoLTE) network and Wi-Fi with compatible smartphones.

With Wi-Fi Un-leashed, all T-Mobile customers can also make free Wi-Fi calls to the United States from anywhereoutside the country – all using their existing T-Mobile number with no app to install and no additional IDs or numbers to manage – wherever they have Wi-Fi.

Full-Bars Personal Coverage Wherever You Choose In a classic Un-carrier move, T-Mobile introduced another radically simple idea−give customers the power and freedom to personalize their coverage wherever they choose. The Un-carrier unveiled the T-Mobile Personal CellSpot, a new device that enables everyone to put the capabilities of a personal T-Mobile tower in their house.

With 57% of American wireless users saying they often drop calls in and around their home, the Personal CellSpot delivers a full-bars T-Mobile experience − in your basement workshop, small business or anywhere else you have broadband – using state-of-the-art Wi-Fi technology. What’s more, it can completely replace your existing Wi-Fi router or operate right alongside it.  And, the T-Mobile Personal CellSpot comes with unique patent-pending technology that prioritizes voice calls for crystal clear HD voice.

Starting September 17th, every Simple Choice customer with a broadband connection and a Wi-Fi-calling ready smartphone can get a T-Mobile Personal CellSpot completely free of charge with a $25 refundable deposit. The only thing left to do is decide where you want your personal full-bars T-Mobile experience.

“For years, the big phone company utilities have told you where you can and can’t have coverage. And wherever their networks can’t reach, you’re SOL,” said Legere. “With T-Mobile Personal CellSpot, we’re putting an end to that old way of thinking. Now, you can decide wherever you want your own T-Mobile tower− giving you amazing full-bars experience where no carrier network has reached before.”

Coverage at 30,000 Feet In a closely related move, T-Mobile extended “Wi-Fi Un-leashed” to the skies through an exclusive, new partnership with Gogo, the world’s leading in-flight connectivity service.  Through the partnership, T-Mobile customers will be able to send and receive unlimited text and picture messages, and even get visual voicemail, on any Gogo-equipped flight on U.S.-based airlines – that’s more than 75% of domestic flights carrying close to 300 million people last year.