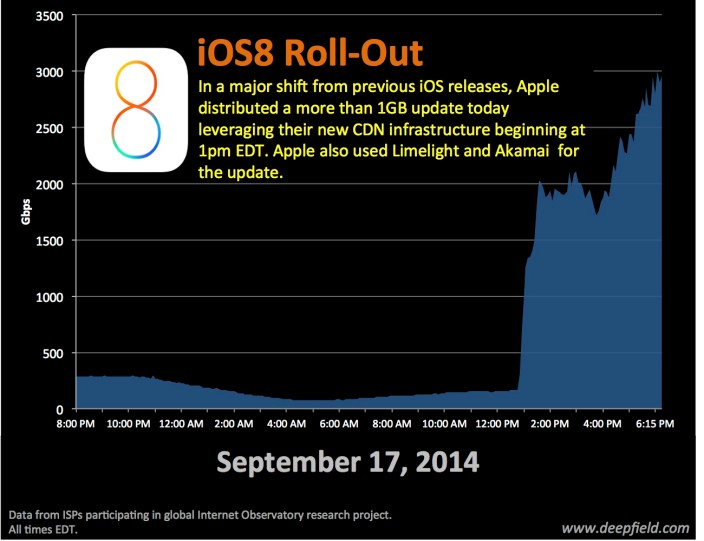 Research firm Deepfield reports that Apple has for the first time relied on its own content delivery network for the distribution of iOS 8 to users (via WSJ):

“Until today, Apple used Akamai and other CDNs to deliver a large portion of their network traffic to consumers. Akamai is a content delivery network or CDN, so when your iOS device asked the network to download a new version, Akamai is the company that has the tens of thousands of servers around the world that would send you that update. Not so this time.”

Back in July reports noted that Apple’s new content delivery network was live and started delivering downloads of OS X. At the time, Apple was still relying on third-party partners for delivering iTunes, iTunes Radio and App Store downloads. Those third parties also helped out with iOS 8 this week for downloads, according to Deepfield. However, Apple reportedly “mostly used its own network of servers for the job, at least in North America.”

Apple has been experiencing a slower rate of adoption for iOS 8 compared to last year’s iOS release over the first 24 hours, according to reports from several companies tracking installs. Many users reported delays in being able to download or install the update, but it’s unclear if Apple’s switch to its own content delivery network caused any hiccups on Apple’s end.