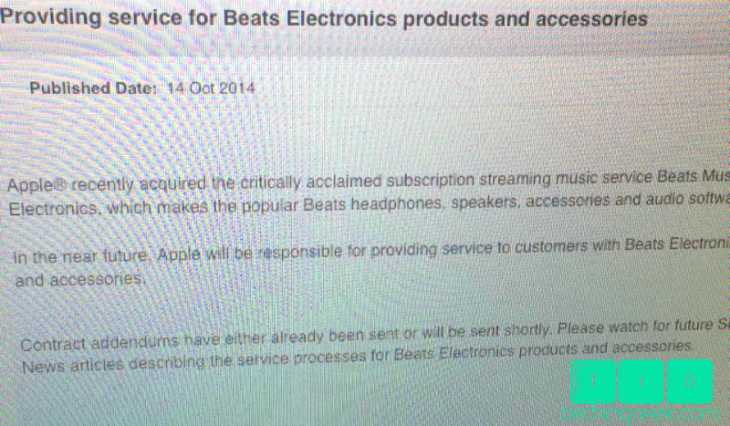 Greek site Techingreek.com is reporting that Apple Service Providers will be providing after-sales service for Beats headphones and speakers within the country, suggesting that Apple itself may be doing the same in countries with Apple retail stores.

The site says that the above message was sent to Apple Service Providers in Greece, stating that they will provide service for Beats Electronics products “in the near future” …

The move would be a logical step on the path to fully integrating Beats into the Apple fold following the $3B acquisition back in May. It’s rumored that the Beats Music streaming service will be rebranded as an Apple service in February.

It was reported a few days ago that Apple was removing Bose products from its retail stores, presumably to be replaced with Beats speakers and headphones.

Beats and Bose have had a few run-ins of late. The two companies recently settled a lawsuit in which Bose sued Beats for alleged infringement of noise-cancellation patents, and SF 49ers quarterback Colin Kaepernick was fined $10,000 by the NFL for wearing a pair of Beats headphones during a post-game press conference.