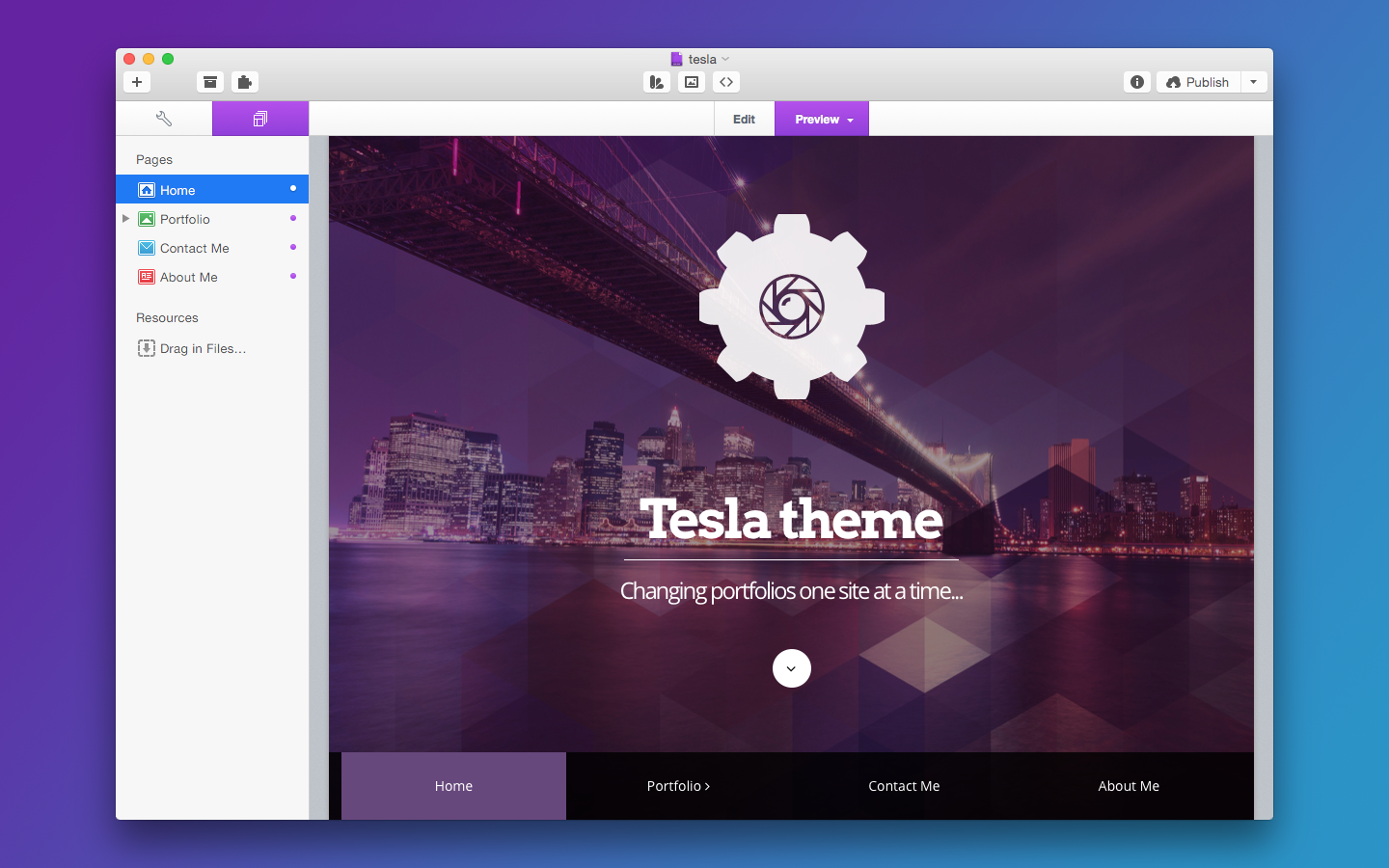 Realmac Software’s popular website development tool RapidWeaver has been updated to version 6 today. The upgrade introduces many new features and enhancements to the app, including a completely redesigned interface for OS X Yosemite. The new update also adds improved publishing that’s much faster than the previous version and a new addon manager for keeping track of your installed plugins.

Five new responsive themes have been added to support a wide variety of screen sizes, and site previews can take advantage of this feature to show you exactly how your site will appear on a desktop browser or an iOS device. The previews can also be resized to any custom dimensions to fit your target display size.

Newly-added support for site-wide HTML/CSS/JavaScript allows you to write a code snippet once and apply it to your entire site. Markdown can also be used to format pages with a new template.

With Rapidweaver 6, Realmac will join the growing number of app developers who have decided the Mac App Store is no longer the best platform for selling their wares. While RapidWeaver 5 was available for $79.99 on the digital storefront, version 6.0 will be exclusive to Realmac’s own web store—at least for now.

The reasoning was laid out in a recent blog post: the company wants to ensure that existing customers have a smooth upgrade pricing path, which is something Apple still hasn’t provided for users on the Mac or iOS App Stores.

Realmac has been careful to point out that while RapidWeaver 6 won’t be launching on the Mac App Store initially, the app has been built to fully comply with Apple’s App Store requirements and can be submitted at any time. However, because of the lack of upgrade pricing capabilities on the store, the in-house launch was prioritized over the App Store. A timeframe for when an App Store submission might happen hasn’t been provided.

Users running any previous version of RapidWeaver (all the way back to 1.0!) will be able to get the latest and greatest version for only $39.99 from Realmac’s website. New users will need to shell out a bit more, with the full price coming in at $89.99. Customers who purchased version 5 on or after August 28th will be eligible to receive a free upgrade. Emails going out to those customers starting today will provide instrutions for claiming the upgrade.

Users running RapidWeaver 5 can rest assured that even if they aren’t ready to upgrade just yet, Realmac will be providing Yosemite support to that version of the application as well, though it won’t get any of the new features added in version 6.

The RapidWeaver 6.0 change log and screenshots can be found below:

– Built for Mavericks and Yosemite, and 64-bit

RapidWeaver 6 has been built specifically for Mavericks and Yosemite, and is a 64-bit app for the first time, allowing you to build bigger websites than ever.

We’ve re-designed RapidWeaver for the latest OS X releases, and to fit in with Full Screen. We’ve added some powerful new features, and carefully refined some of the most popular existing features too.

– Supercharged Publishing (up to 3x faster)

The new publishing engine in RapidWeaver 6 is up to three-times faster than previous versions. With multi-file uploads, and a host of other clever tricks, your website will be online or updated faster than ever.

Built exclusively for RapidWeaver 6 by some of the best RapidWeaver theme developers out there, these 5 new responsive themes make it easier than ever to built a stunning, mobile-friendly website in minutes.

There’s over 1,000 third-party addons available for RapidWeaver – and the Addons Manager is there to help you organise and locate your favourite addons for your projects.

Need to see how your website will look on a mobile device? With Responsive Preview, RapidWeaver 6 enables you to resize the preview area to any width – or jump to handy presets like “iPhone” and “iPad”.

There’s no need to write any code: Markdown generates the code for you, and produces beautiful HTML too.

A hugely-requested feature, RapidWeaver 6 now allows you to place code once in your project and have it automatically applied to your entire project.

– Hundreds of other features, fixes and workflow improvements.

This upgrade is the result of several years to careful work to ensure RapidWeaver 6 is both the most powerful, and most reliable, releases of RapidWeaver yet. We’ve focused on speed, power and the workflow improvements you’d expect – if you spend your day working in RapidWeaver, you’ll love it.