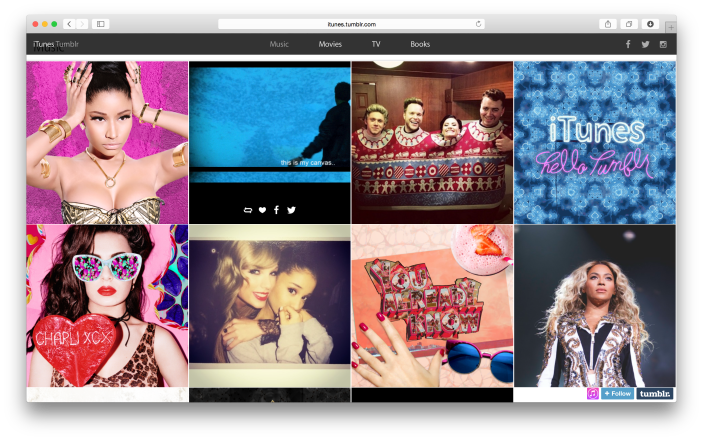 In an interesting move, Apple has today launched a Tumblr blog for iTunes. The ‘blog’ runs a highly customized theme that more closely reflects Apple’s own website than a typical Tumblr page. The page features music, movies, TV and books content, with individual posts consisting of images, videos and animated GIFs of artists. Tumblr users can reblog these images on their own feeds, for social sharing. On a related note, iTunes also opened an official Instagram account earlier this month. 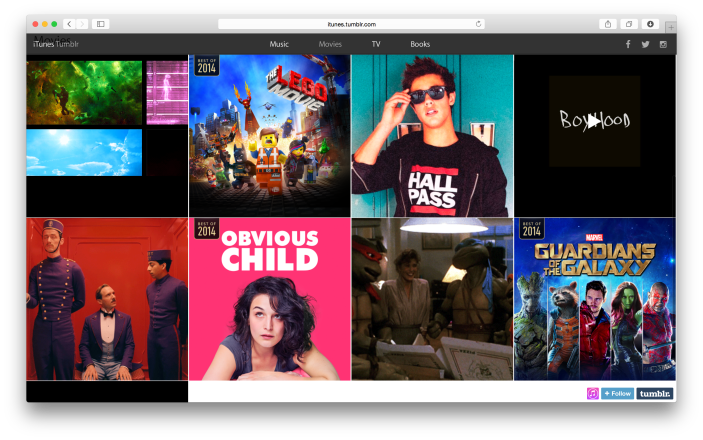 Right now, the blog is prominently featuring Apple’s Best of 2014 recommendations for iTunes. Apple infamously used Tumblr for an iPhone 5c advertising campaign. For a while now, the iTunes and iBooks teams have been running active Twitter accounts — despite Apple, as a whole entity, still lacking an official account. The @iTunesMusic account has over 6 million followers, for instance.

In 2014, Apple has made bigger steps into social media. Apple CEO Tim Cook joined Twitter in September and the company liveblogged its own September media event (including promoting its own #applelive hashtag). 9to5Mac reported earlier this month that Apple was recruiting a a new head of social media, to run campaigns like this. The company also brought the former social media chief of Nike and Burberry onboard in August.