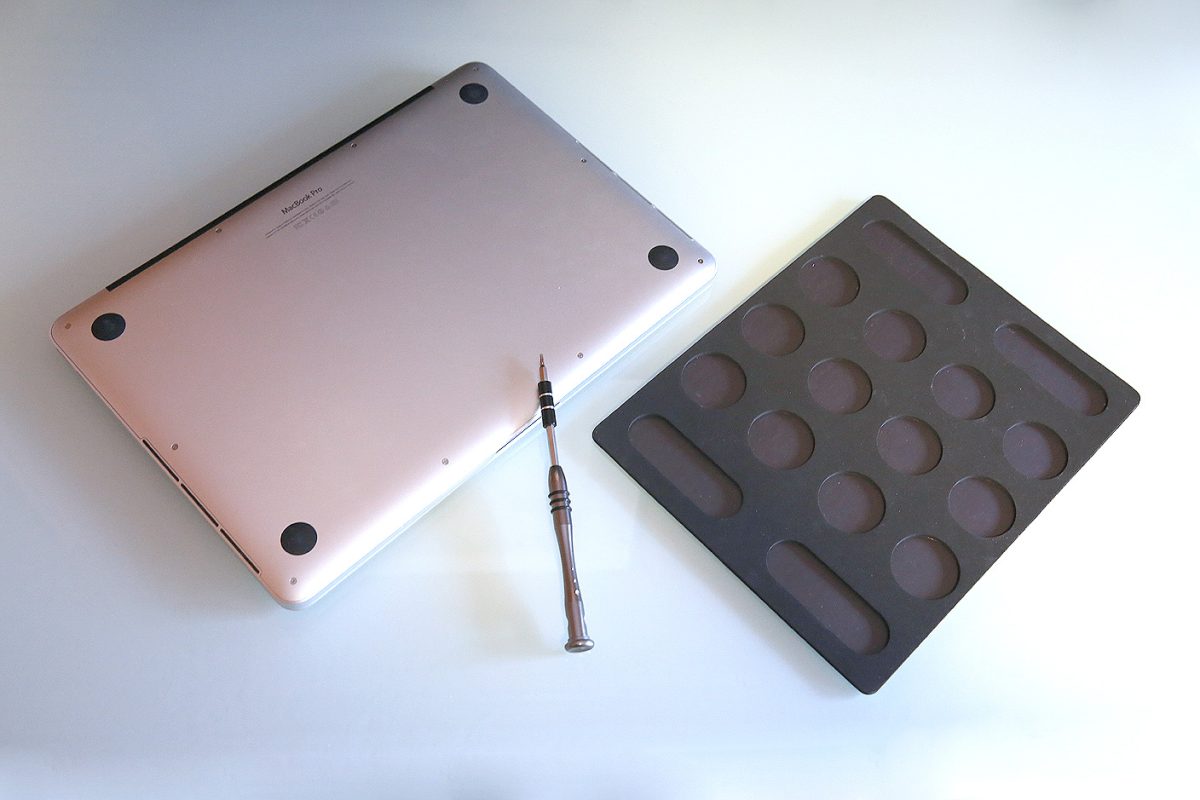 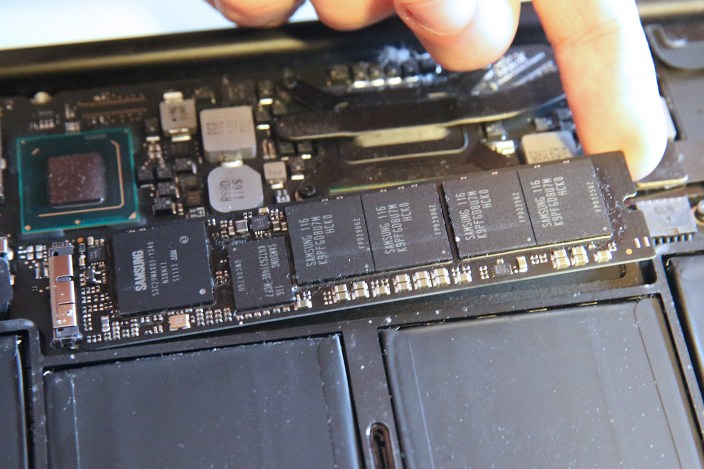 Over the past two weeks, I’ve written about the (surprisingly easy) process of adding solid state drives (SSDs) to radically speed up older iMacs, and the varied challenge levels of adding SSDs to older Mac Pros, Mac minis, and non-Retina MacBooks. Today’s guide looks at the easiest SSD installations of all: the MacBook Air and Retina MacBook Pro. A new SSD in one of these machines could have two, four, eight, or sixteen times the original storage, plus two to four times faster speeds.

Apple shipped most MacBook Airs and all Retina MacBook Pros with solid state storage, so upgrading these machines for extra capacity and speed is generally as simple as picking a new drive, then using two special screwdrivers during the installation process. Assuming your MacBook is old enough to be out of warranty — except for a few specific models — you’ll find that pretty much anyone can handle this swap with the right tools. Below, I’m going to show those tools to you, as well as the MacBook-ready SSDs that are worth considering… 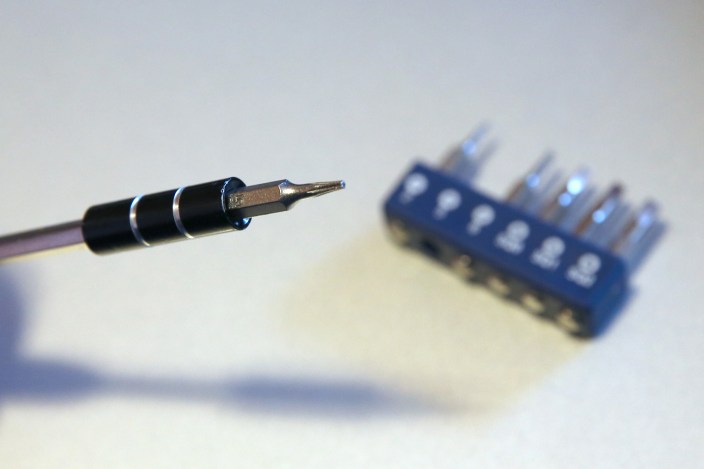 The original MacBook Air was designed with solid state memory as an option, not a mandate. Back in 2008, Air buyers could add a 64GB SSD for a whopping $1,300 premium over the ultra-thin computer’s normal price, and there was no consumer 1TB drive capable of fitting inside a laptop — a desktop 1TB SSD sold for $4,000. Today, the lowest-end MacBook Airs and Retina MacBook Pros ship with a 128GB SSD as standard; Apple’s 256GB SSD adds $200, versus $500 more for 512GB, or $800 more for a Pro-only 1TB SSD.

But those are Apple prices; third-party drives are much more affordable. Following some relatively straightforward guidelines, you can bump an original MacBook Air up to 128GB for $95, or enhance newer MacBooks for $170 (240GB), $300 (480GB), or $550 (1TB). Many MacBook Air and Retina MacBook Pro SSDs come with kits that help you transfer the contents of the old drive to the new one, open your computer, and keep the old SSD around as an external drive if you want it. 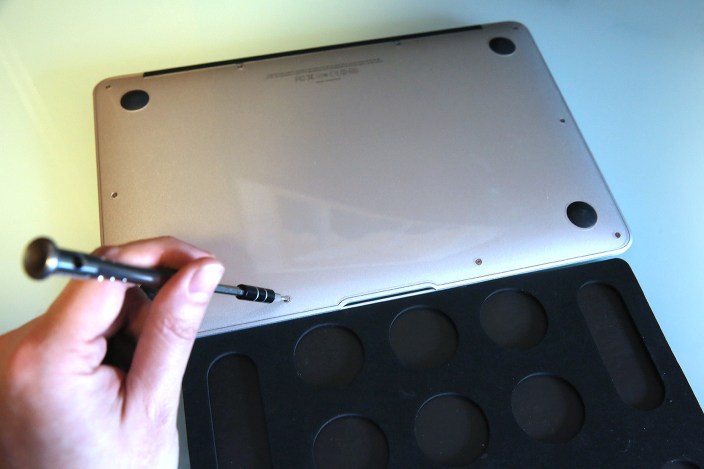 There are five key generations of the MacBook Air that use different types of solid state drives.

How easy is installation? Except for the older first- and second-generation MacBook Airs, the process is incredibly simple: you generally use a Pentalobe screwdriver to remove 10 screws from the Air’s bottom, then a Torx T5 screwdriver to unscrew one screw on the SSD. The JBtek $9 kit shown below includes both screwdrivers.

I personally use a regrettably discontinued version of iFixit’s Pro Magnetic Project Mat (shown below; it’s no longer made with these handy cutouts) to hold and organize the screws, but I’d call it completely optional. Similarly, iFixit’s $30 54-Bit Driver Kit may be overkill for this particular project, but it includes all the wacky screwdriver pieces you’ll need for other Apple projects. 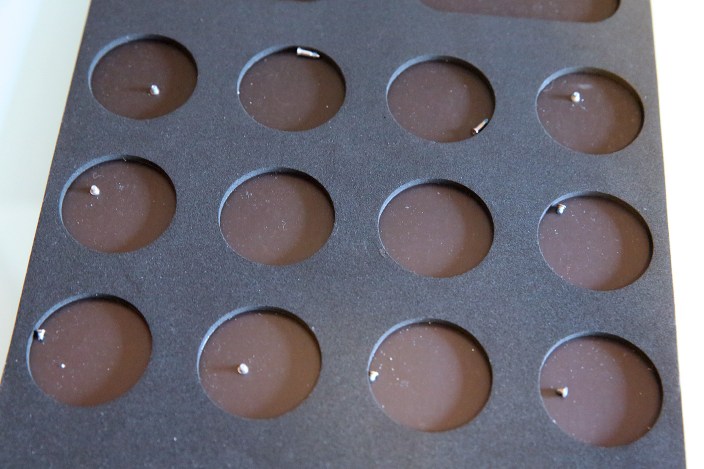 Once you’ve lifted its bottom lid away from the rest of the housing, the MacBook Air is easy to figure out: the SSD is in the center, just above the central right battery pack. You need to make sure you’ve discharged any static before touching the internal components, and gently disconnect one battery connector off to the left of the SSD; iFixit’s guides contain the details. 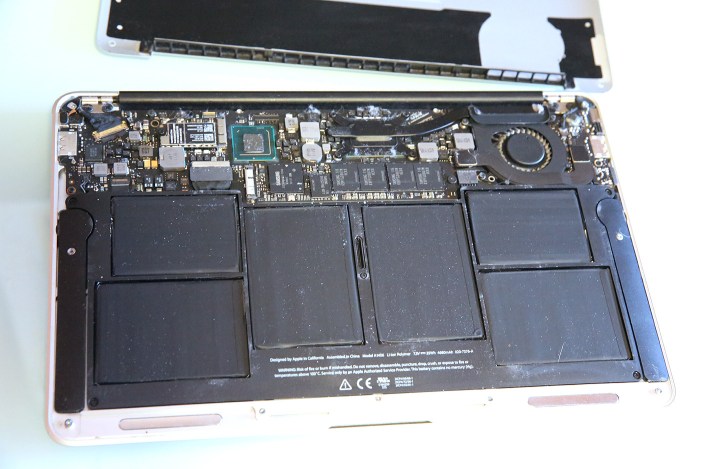 At that point, swapping the SSD requires little more work than unscrewing this single Torx T5 screw, gently removing the old SSD, and then going in the opposite direction to replace the SSD, battery connector, one Torx screw, the bottom lid, and 10 pentalobe screws. That’s it. 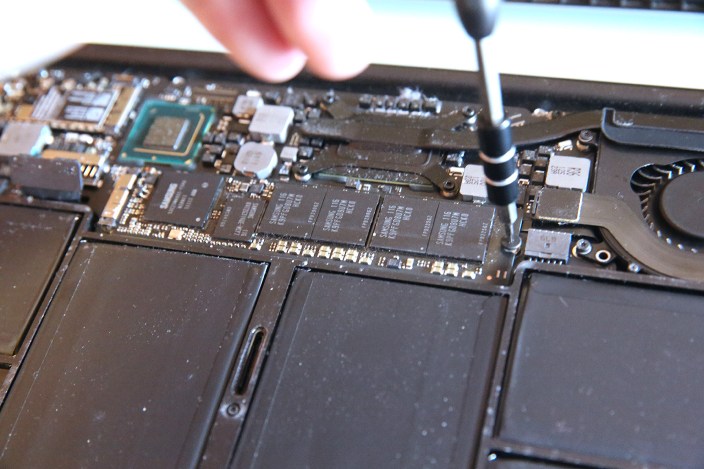 The directions are far more complex for Apple’s oldest 13″ MacBook Air models: you instead need only a Phillips #00 screwdriver, but will have to pull 10 external screws, 13 internal screws, the full battery, and multiple cables before reaching the hard drive, then go in the opposite direction to close everything up. If you have one of these old machines, you’re probably best off seeking the services of a third-party Mac repair shop to do the SSD swap. 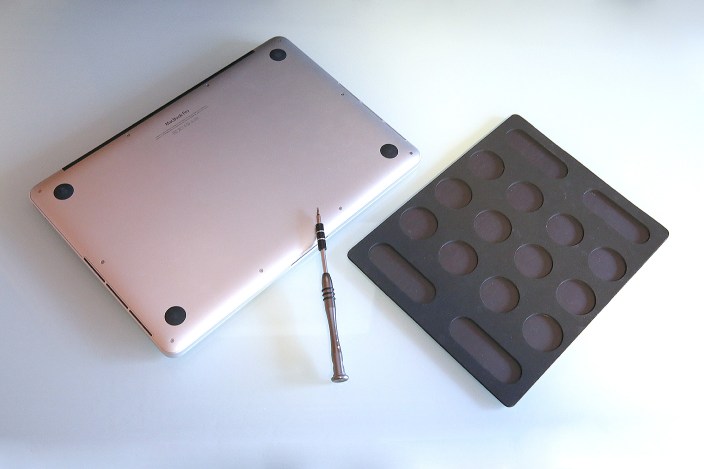 There aren’t as many generations of the Retina MacBook Pro as there are MacBook Airs, so the choice between SSDs is simpler. 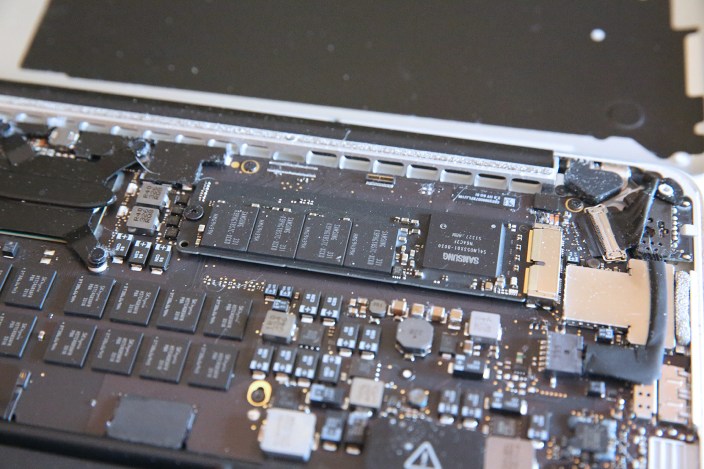 For the 15″ Retina MacBook Pro, SSD replacement is virtually identical to the newer MacBook Airs: dead simple, with 10 undercarriage screws, a battery connector, and one interior screw to remove. As noted above, the Transcend and OWC kits come with the screwdrivers you’ll need, as well as external drive housings to help you migrate your files. The original 13″ Retina MacBook Pro requires quite a few additional steps; Apple significantly simplified the SSD replacement process for subsequent-generation 13″ machines, bringing them to parity with the 15″ model and MacBook Airs.

Preparing Your Software/Copying Your Old Drive To Your New SSD

As noted above, most of the SSDs sold for the MacBook Air and MacBook Pro can be purchased with external enclosures, which optionally lets you format the SSD and set it up before you install it in your computer. You can use a complete drive cloning app to just transfer your old drive to your new one, or run a complete Time Machine backup to another external drive, then restore the backup’s contents to the freshly formatted MacBook Air/Pro after rebooting with Time Machine. 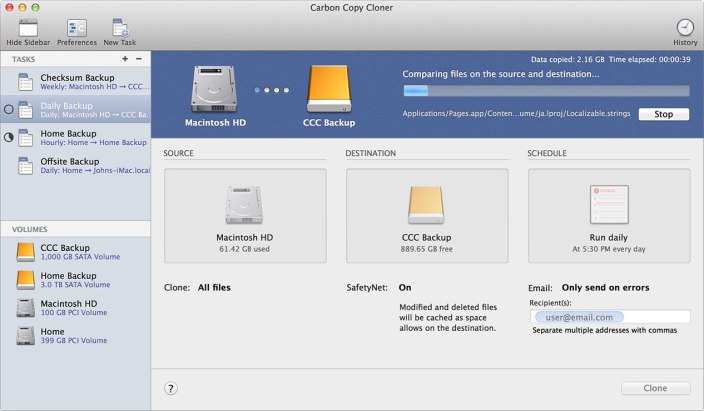 If you bought a kit with an external enclosure, place your new SSD inside the enclosure, and connect the enclosure to your MacBook with a USB cable. Then run SuperDuper or Carbon Copy Cloner (shown above) to transfer the old drive’s contents to the new drive. This will let you start using your MacBook Air or Pro right away after the drive is swapped, without waiting hours for Time Machine. For better or worse, this guarantees that every one of your files (and potentially plenty of cruft) will be exactly where it was before. 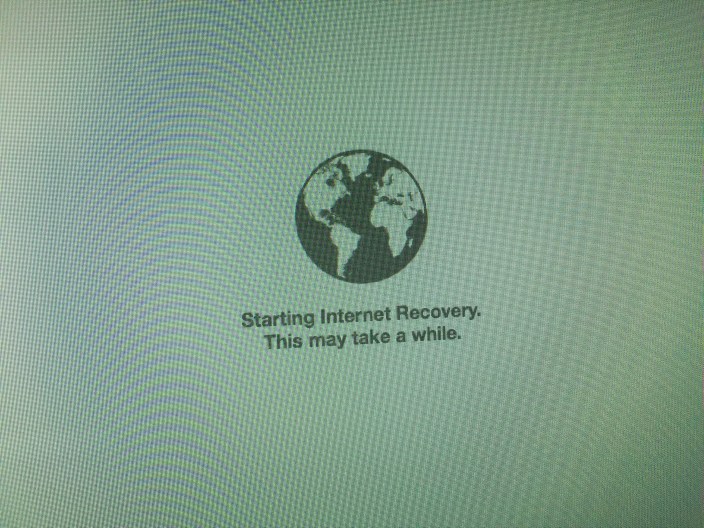 In my opinion, going the Time Machine route is a better idea when starting fresh with an SSD, and it costs nothing. After backing up your MacBook with Time Machine, you just turn off and unplug your laptop, swap the drives, then hold Command-R down on the keyboard when first restarting the computer. Any recent version of OS X will boot into Internet Recovery mode, enabling you to use Disk Utility to format the SSD (choose Mac Extended + Journaled), then restore directly from your Time Machine backup. The restoring process will take hours, but you’ll come back to a fresh installation of OS X with everything pretty much as it was left on your old drive.

On my previous SSD upgrade articles, readers asked about Trim support for third-party SSDs, a topic that’s both important and potentially somewhat confusing. Trim — automatic recycling of SSD space freed up by deleting files — is a background task performed by your Mac. It’s handled in the background by OS X, though for reasons unknown, Apple generally provides Trim support only for its own drives. Transcend’s free JetDrive Toolbox software enabled Trim support for Macs before Yosemite, but the feature is currently disabled for Macs running Yosemite.

Cindori’s free application Trim Enabler (Pro version $10) enables Trim support for third-party SSDs under OS X, including the latest 10.10.2 and 10.10.3 versions of Yosemite. Please note, however, that Trim Enabler must be turned off each time you do a OS X system update (say, from 10.10.2 to 10.10.3); if you forget, you’ll see a gray box when the machine tries to reboot after an update, and you’ll need to follow these instructions to make the machine work properly again. 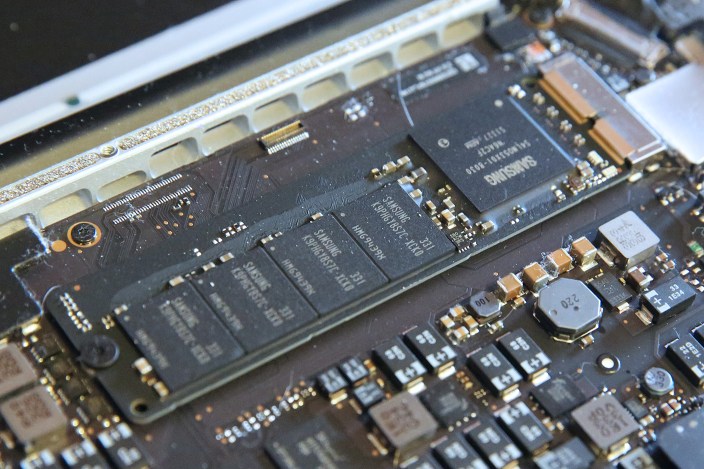 Swapping your MacBook Air’s or Retina MacBook Pro’s SSD is generally a pretty easy process, and the benefits are obvious: you’re virtually guaranteed to enjoy much more storage capacity, and under the right circumstances, you’ll see a nice speed bump, too. Most of the MacBook Air models mentioned in this article can at least double their speeds with newer SSDs, and if you’re willing to spend a little bit more, you’ll have enough storage space to keep your MacBook in active use for years to come.

If you want to consider external storage solutions instead, check out our guide to MacBook, Mac mini, and Mac Pro SSDs. This earlier guide to swapping your iMac’s old hard drive for a fast new SSD is great for upgrading Apple’s larger all-in-one machines, too.