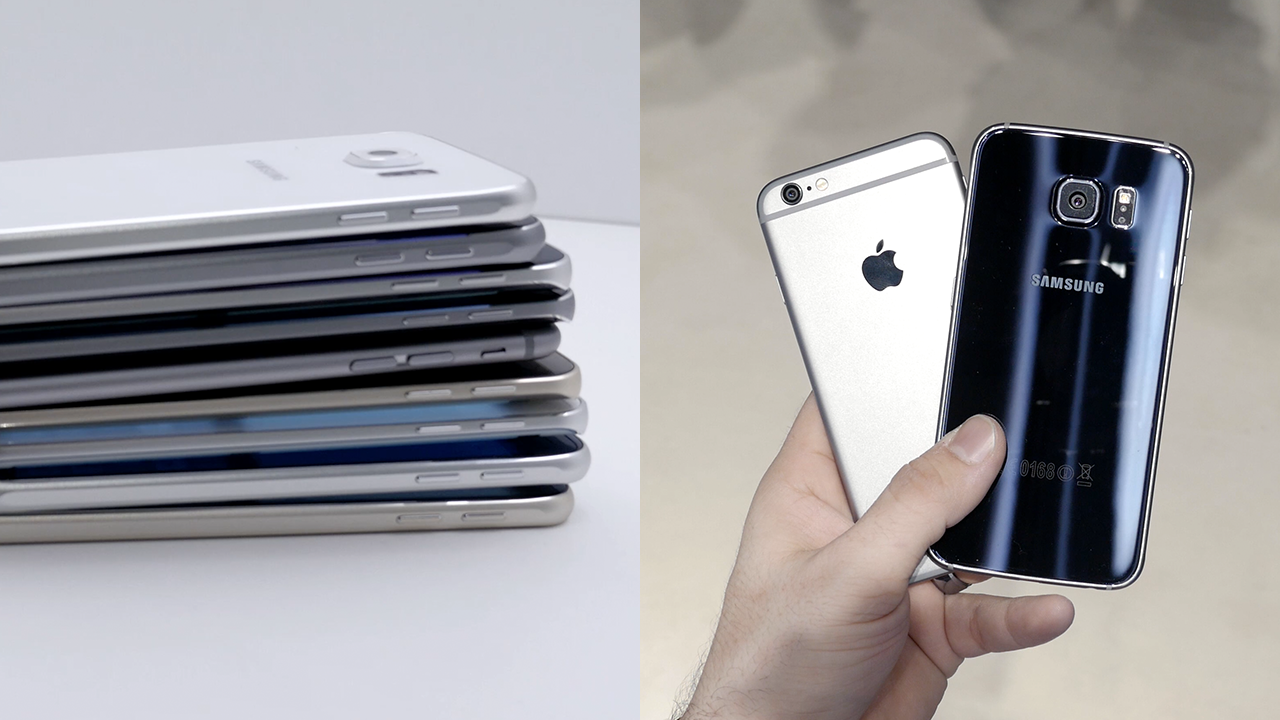 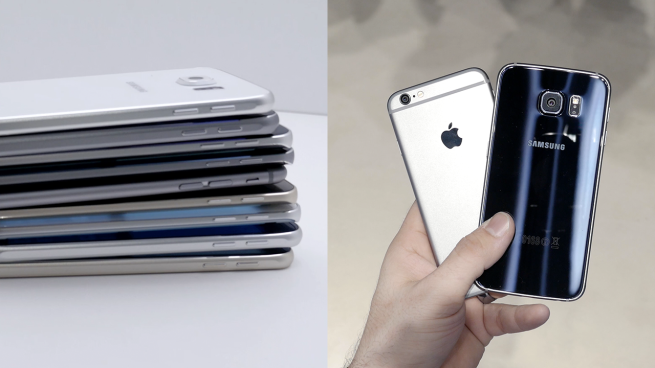 Believe it or not, there’s an iPhone 6 in that pile of smartphones shown in the image above and we’re going to compare it to Samsung’s newly announced Galaxy S6. Which one would you prefer? More importantly, what are the major differences between these two devices? Well, let’s go ahead and find out…

Today we’re comparing Samsung’s Galaxy S6 to Apple’s iPhone 6. These two devices are from completely different areas in the mobile space, but there are still some striking similarities between the two.

As far as design goes, Samsung has implemented a fresh new design with the Galaxy S6, which in my opinion, looks miles better than its predecessor. Some people have been quick to point out that it appears to be a cross between iPhone 6 and iPhone 4, but honestly, I’m just happy Samsung ditched the plastic builds found on previous generation smartphones. When it comes to thickness, the 6.8mm frame on the Galaxy S6 wins over the marginally thicker 6.9mm found on the iPhone 6.

The Galaxy S6 features a metal frame that’s color-matched depending on the model and Gorilla Glass 4 covering its front and back side. The build quality here appears to be comparable to the iPhone 6 in nearly every way, but Apple ditched the glass panel design years ago and has stuck with metal housing for the last few models.

Check out our full Galaxy S6 vs iPhone 6 comparison video below:

Unfortunately, the design of the Galaxy S6 and iPhone 6 comes with a few compromises. You won’t find a removable battery, SD card expansion, or waterproofing on either device.

Below the display, Apple’s iPhone 6 features a home button with a built-in fingerprint sensor called Touch ID. Samsung launched its own fingerprint sensor with the Galaxy S5, but has majorly improved it on the S6. It works exactly like Touch ID now, but Samsung may have gone a little too far in mimicking the setup screen. Check out the above video for a side-by-side demo of the fingerprint sensor features. Samsung also uses two capacitive buttons on the front for navigation through the user interface.

On the back side, the Galaxy S6 features a 16-megapixel camera with optical image stabilization, and LED flash, and a heart rate sensor, while the iPhone 6 sports an 8-megapixel rear shooter, dual-tone LED flash, and the Apple logo.

The button layout between the two are pretty similar, with the volume buttons on the left side and power/lock switch on the right side, but around the top the Galaxy S6 features an IR blaster. On the bottom end, the iPhone 6 sports a microphone, Lightning port for charging, and speaker grill. With the Galaxy S6 you’ll find a very similar layout, but instead we have a Micro USB port for charging.

On the inside, there’s a lot difference between the Galaxy S6 and iPhone 6, but if you’d like to find out more about Samsung’s latest flagship check out our Galaxy S6 and S6 Edge hands-on comparison video or our comparison to the Galaxy S5. Furthermore, you can check out our iPhone 6 review here or our iPhone 6 vs iPhone 5s comparison for a closer look at it. So which device do you prefer? Let us know with a comment.