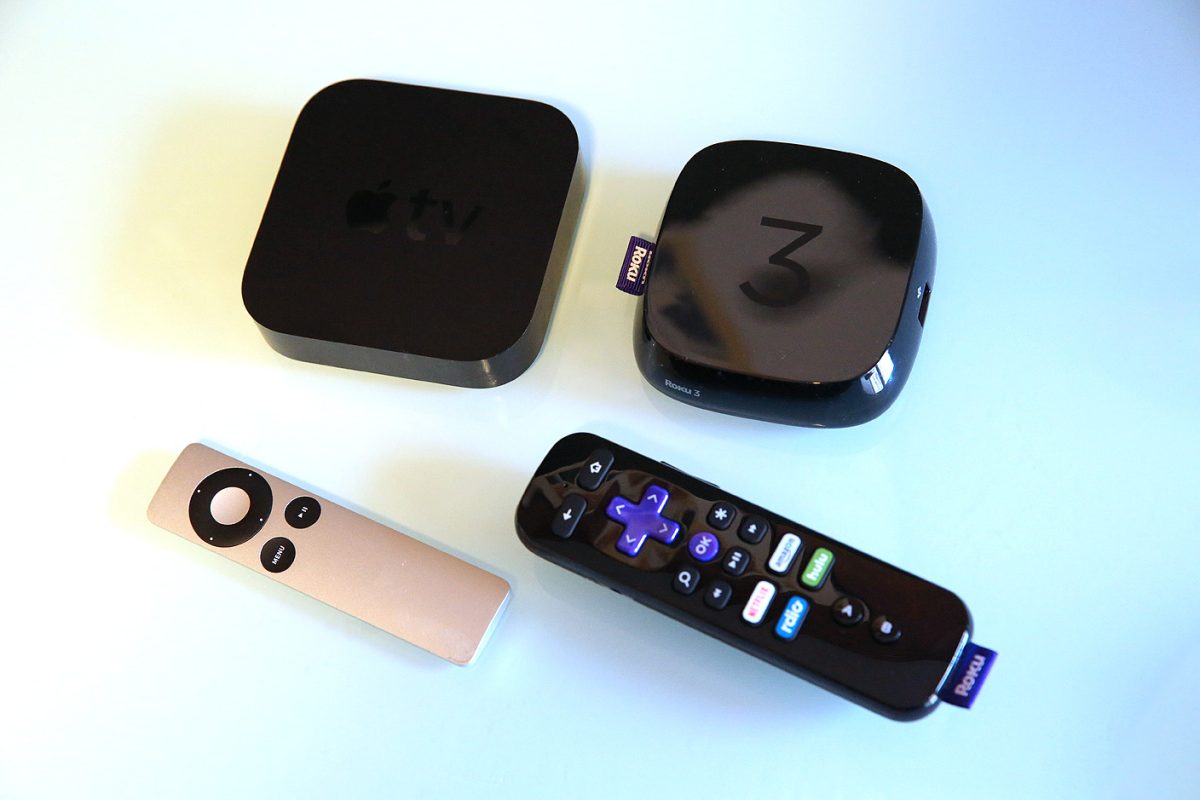 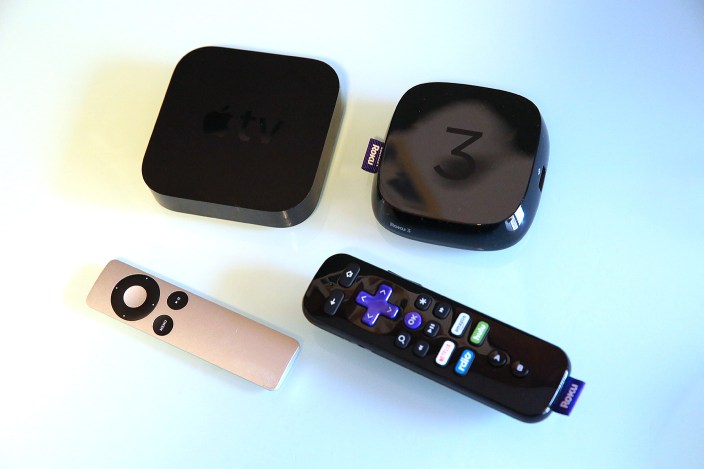 Just so there’s no ambiguity on this point, I’m definitely an Apple TV fan. The first-generation model was a (literally) hot mess, but Apple did a much better job with the streamlined second- and third-generation versions, which I use every day and have strongly recommended for years. If you have an iPad, iPhone, or iPod touch, the Apple TV is one of the top three accessories you can buy for under $100, and nearly a no-brainer at Apple’s recently announced $69 price point.

Even as a fan, though, I give Apple TV’s chief competitor Roku great credit for developing compelling alternatives. According to reports, Roku is the number one seller of media streamers, and has been outselling the Apple TV for some time now. While it’s true that sales don’t necessarily reflect quality, Roku has earned its numbers by frequently iterating on its products — ironically unlike Apple, which has spent years letting an old Apple TV design chug along as a “hobby.” The difference in Roku’s and Apple’s approaches became starker yesterday when Roku released the new Roku 3 with Voice Search ($100) and new Roku 2 ($70), updates to two of its already-successful devices. These media streamers include several of the key features Apple should be adding to the Apple TV, including voice search, downloadable apps, games, and more… 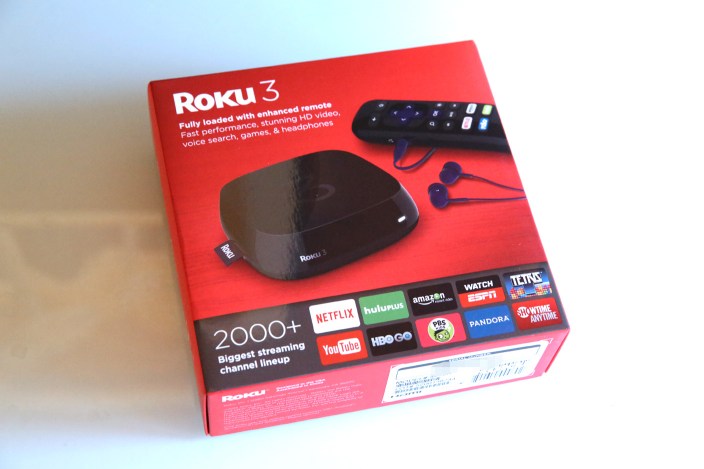 This is the new Roku 3’s box, which boasts over 2,000 channels — a mix of streaming video channels, streaming music services, traditional apps, and games. Regardless of which categories you want to compare, Roku has many more options than the Apple TV. Here’s a quick rundown of what Roku got right, and what’s not quite up to snuff with Apple’s design. 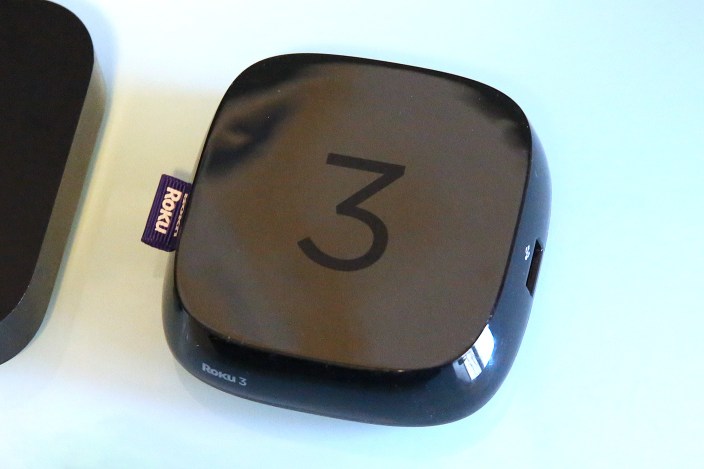 Greater Expandability. The new Roku 3 is physically smaller than the current-generation Apple TV, but has more expansion options. Apple limits you to an integrated 8GB of automatically-managed storage space, while Roku includes a microSD card slot on the back for additional app and game storage, plus a full-sized USB port on the right side to let you play back photos, music, and videos. 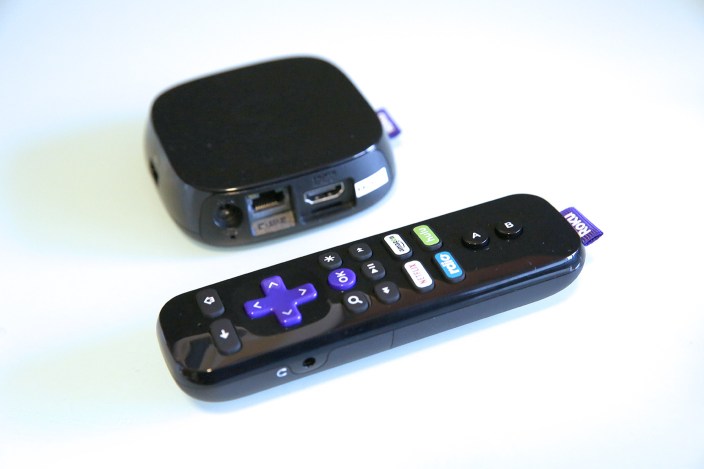 A Superior Remote Control. Roku 3 includes the company’s Enhanced Remote Control, which has a microphone built in for voice search, as well as a headphone port that enables you to listen to lag-free audio, automatically muting your TV in the process. You get a basic pair of earphones in the package, controlled by volume buttons on the remote’s right side. Additionally, the remote can be flipped into landscape orientation to use as a game controller. 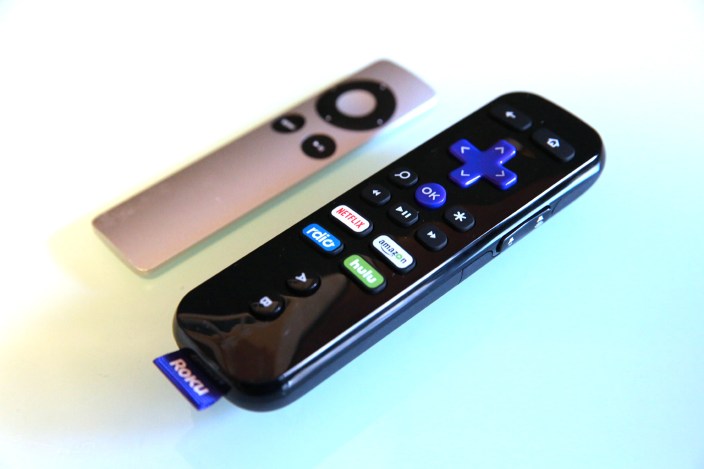 Four buttons built into the Enhanced Remote take you directly to Netflix, Amazon, Hulu, or Rdio, four of the top apps Roku offers. Although the Apple Remote included with Apple TV is much smaller, and its dead simple button design is conceptually appealing, there’s undeniable convenience in having one-touch access to several of the media streamer’s most commonly used apps. 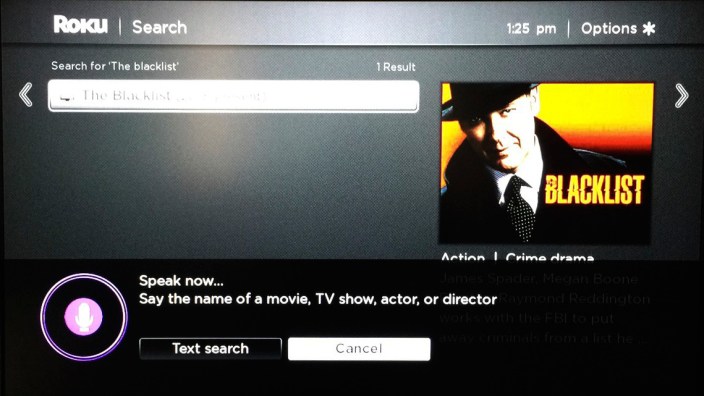 Voice Search. The killer feature found in the new Roku 3 is voice search. Simply press the search button on the remote and the box brings up this Siri-like interface, which notably can be used without holding the remote anywhere near your face. Roku 3 does a very good job of recognizing names of actors, directors, TV shows, and movies: in my brief testing, the only time it misidentified something was when I asked it to search for a name that wasn’t in its database. It successfully pulled up shows and people with at least as much accuracy as Siri on iOS, and quickly, at that. 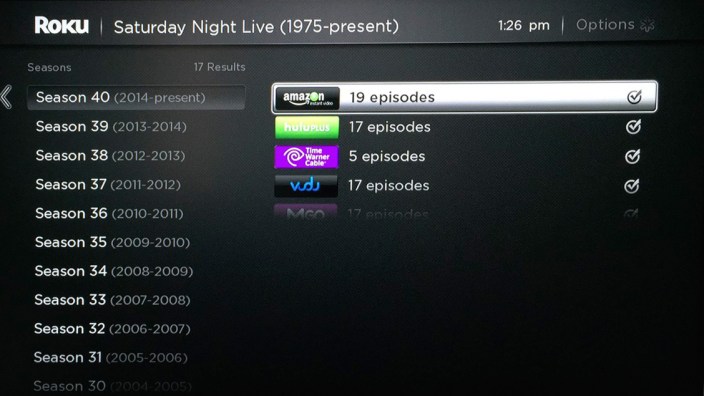 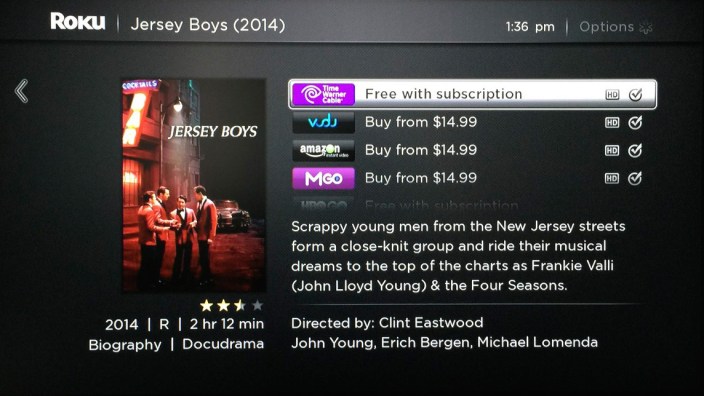 Unified Search. One of the greatest conveniences Roku offers is unified search, a feature that’s currently compatible with its most popular apps. You can simply speak the name of a TV show, movie, or actor and watch as Roku offers a list of different viewing options, which can save you both time and money. If a movie’s available for free on one channel, you’ll find it here, and can click to go directly to the viewing page in that channel. As contrasted with the Apple TV, Roku radically reduces your need to page through multiple apps and use separate searches to see what’s available. 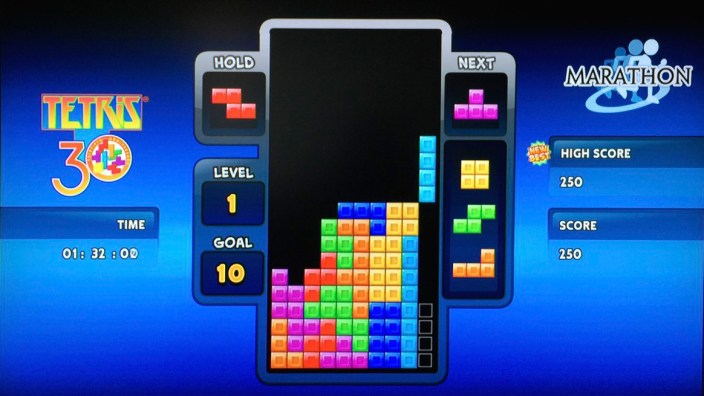 Games. You can download a version of Tetris for free when setting Roku 3 up, and other games are sold at App Store-like prices. Serious gamers will bemoan the Wii Remote-like joypad and button limitations of the Roku 3’s included controller, but by comparison with the Apple TV, at least there’s a way to play games directly on this box. 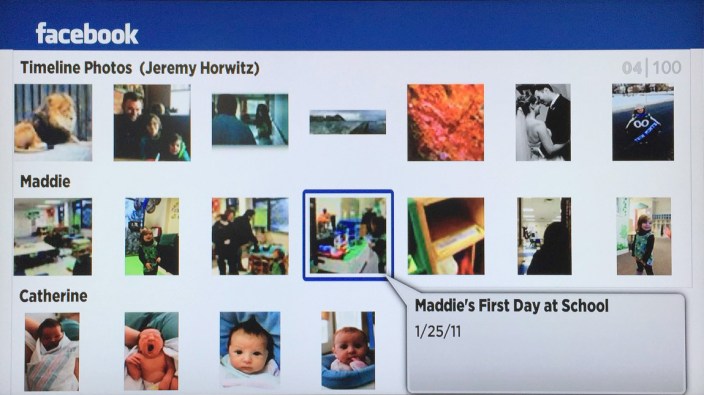 Apps. Although Roku 3 is hardly the first media player to include app support, the presence of familiar names such as Facebook is a huge plus over the Apple TV, which has focused almost exclusively on streaming video channels. Once you’ve set up the Roku box — a process that’s about as quick as getting your first Apple TV set up, all things considered — adding new apps to Roku is as easy as going to the Channel Store, selecting a category that interests you, and downloading an app from a nicely organized collection. 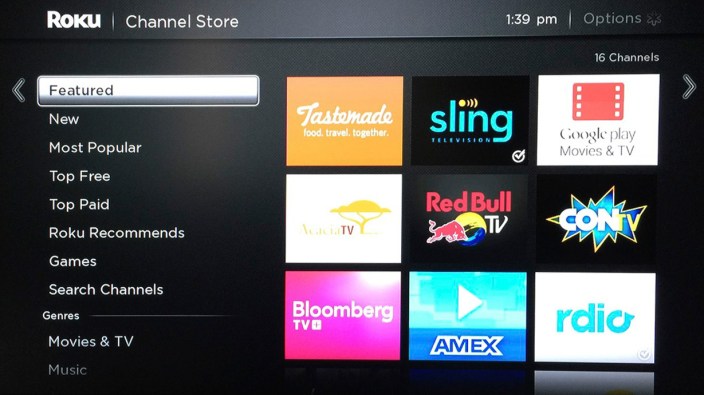 Unlike the initial Apple TV setup process, which forces you to accept a bunch of channels you don’t want and manually hide them later, Roku really lets you customize the “channel” lineup before you even start using the device. A short code and URL appear on your TV’s screen, with instructions to visit the URL from your phone, tablet, or computer. You pick the channels and games you want to start out with, confirm your selections, and within a few minutes arrive at a Roku main menu that’s customized to your needs. 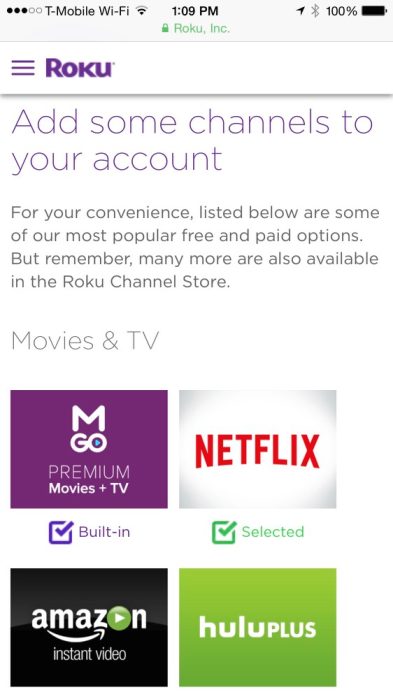 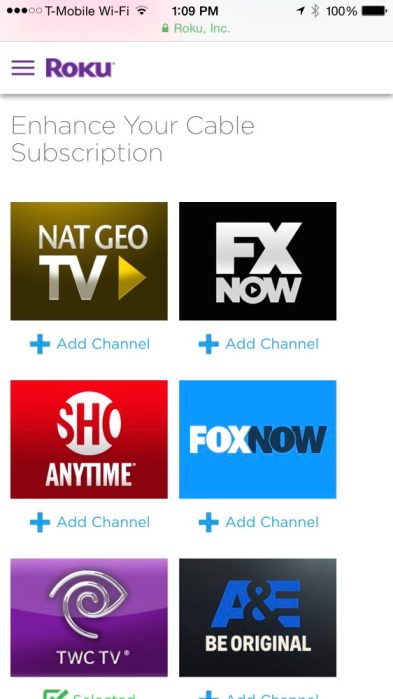 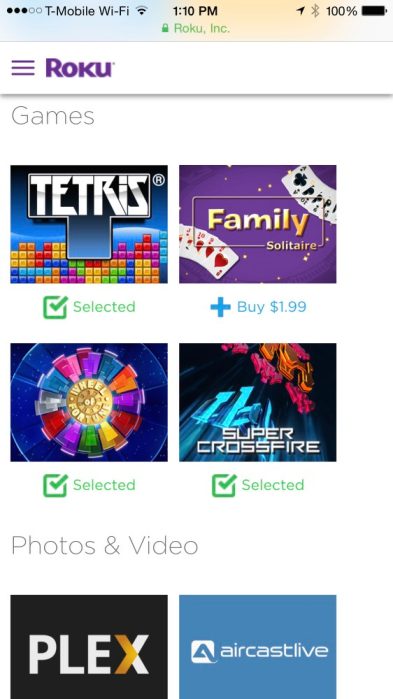 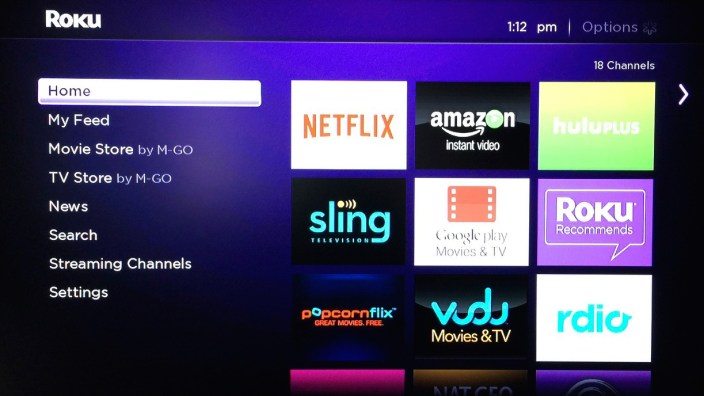 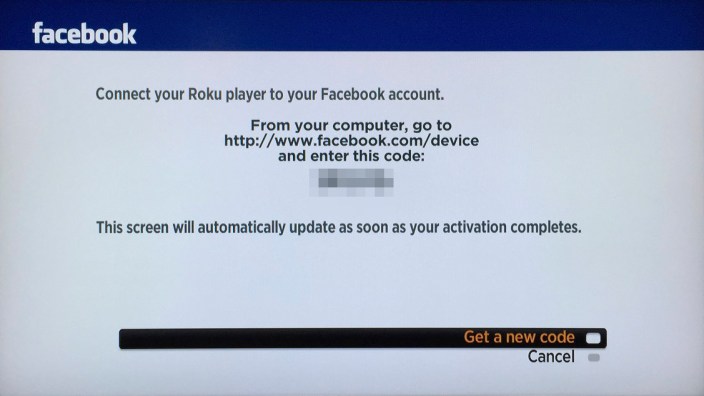 Rather than forcing you to enter in your account information for every service you want to use, Roku uses similar short codes and URLs accessed from your device of choice to make sign-ins simple. I found that these codes typically made it easier to log into services on the Roku than on the Apple TV. 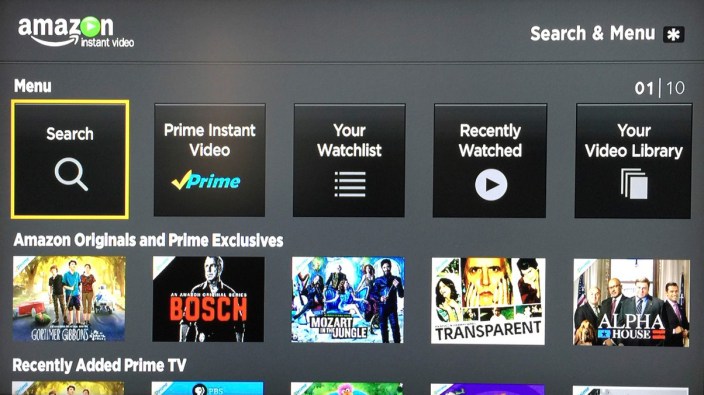 Roku also welcomes a wide variety of different services to its platform — virtually everyone except Apple is represented. Amazon Instant Video, Google Play, Sling, and other services from rival hardware manufacturers can all be accessed from the same device. While you can AirPlay many of these services to the Apple TV from an iPad or iPhone, Apple has made its competitors unnecessarily difficult to purchase from and access directly. Instead, Roku unifies them all under one umbrella and lets them compete on quality and pricing. 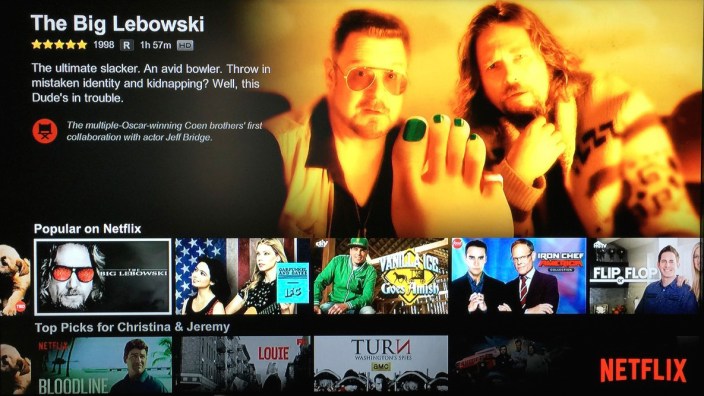 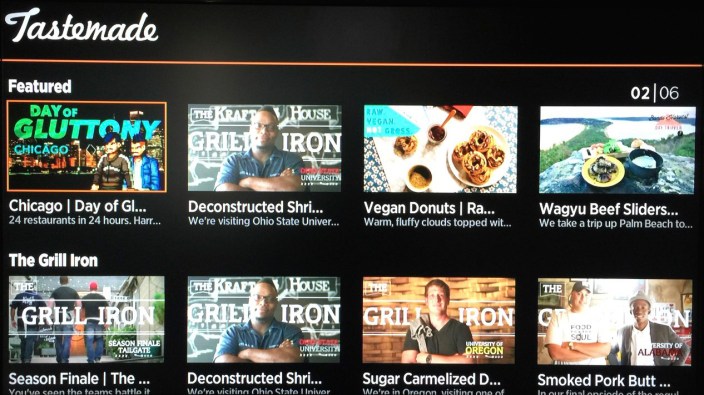 Unique Interfaces. Roku channels don’t just look like the same UI with different text and pictures swapped in. Individual channels have their own designs, some of which may be more appealing to you than the Apple TV variants. If a channel wants to use futuristic, hip, or casual fonts, it can. But this “almost everything goes” approach also brings up one of Roku’s arguable issues, and something Apple has (for better and worse) addressed with its products… 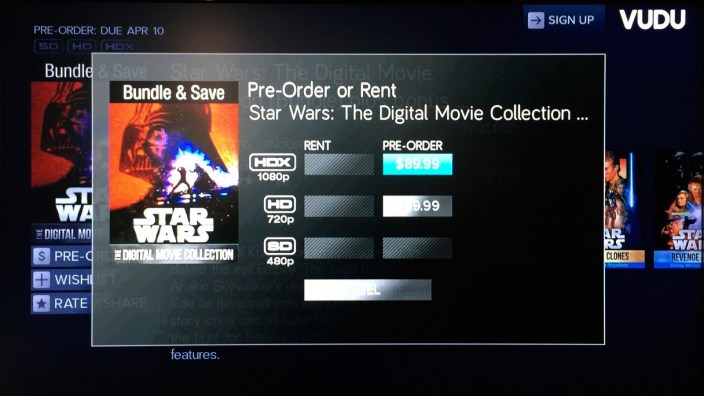 A Fragmented Media Collection. Good news: Roku organizes a ton of content within its search feature, and gives you access to many different stores. Bad news: unlike Apple TV, where you know that all of the content you purchase can be found in a single library (Apple’s), you have so many purchasing options on Roku that you’d better hope that the store you’re buying from will still be around five years from now — and accessible on whatever devices you’re using at that point. For instance, would you pay $90 for a set of high-definition Star Wars films sold by the Walmart-backed video service Vudu? Well, that’s an option on Roku, and not on the Apple TV. 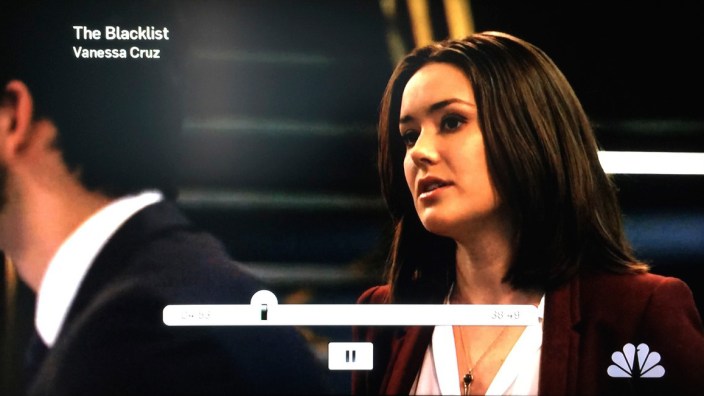 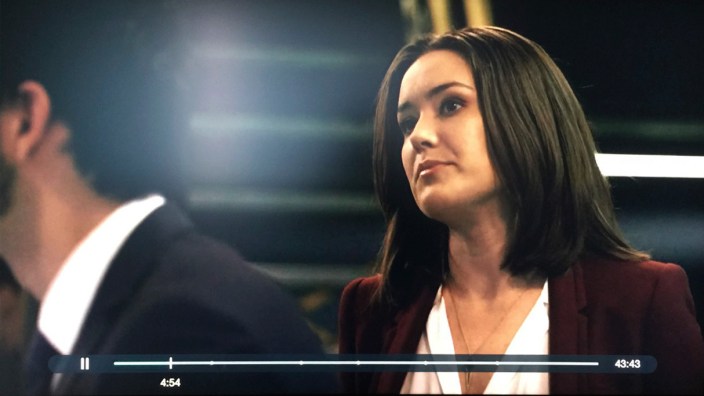 Quality. The video quality of the streams I cross-tested on Hulu and Netflix looked a little better on the Apple TV than on Roku 3 — crisper and with less dithered color, though it varied from provider to provider. Roku’s UI also overlays more graphical elements on top of the video, a benefit of Apple’s minimalist design sensibilities that isn’t obvious until you compare it directly against competitors. These photos don’t do justice to the video quality differences I’ve seen, and they’re not hugely obvious at a several-foot distance, but I’d give the Apple TV an edge here. 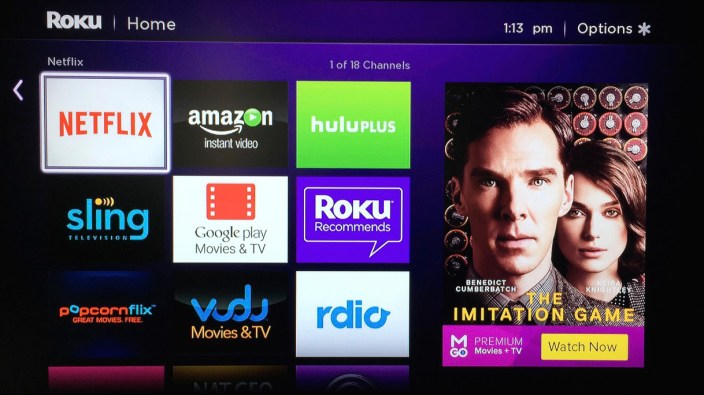 No AirPlay Support or iTunes Integration. When Apple added AirPlay streaming and mirroring support to the Apple TV, it went from being a limited and self-contained platform to being wirelessly expandable using iOS devices. While AirPlay has been really buggy for some time now, it remains one of the biggest selling points of the Apple TV, particularly since wireless Mac mirroring and screen extension features were added. By comparison, Roku 3 doesn’t offer AirPlay or iTunes integration; it exists primarily to run its own apps. There is a “beta” screen mirroring feature for select Android, Windows Phone, and Windows 8.1 devices, which “may work for you,” Roku says. That would be funnier if AirPlay worked 100% reliably across all of Apple’s devices. 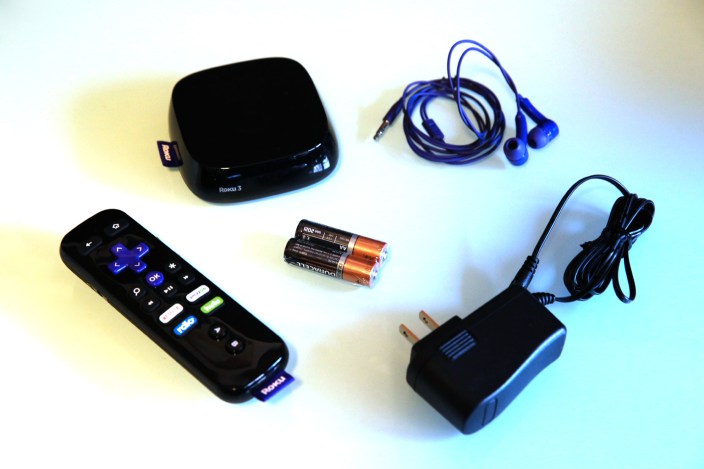 So Should You Jump Ship From Apple TV to Roku?

Answering this question depends on what you want to do with your TV. If you’ve been spending a lot of time recently paging through Apple TV channels instead of actually watching content, the new Roku 3 with Voice Search will make as much sense to you as it does to me. Being able to voice search your way to a favorite show is awesome, as is speaking the name of an actor or director to quickly locate their complete catalog of work… across multiple apps. If you don’t need voice search, the new Roku 2 is basically the same device minus the voice-assisted Enhanced Remote Control, and priced to compete directly against the $69 Apple TV. Roku offers many competing channels Apple lacks, as well as downloadable apps and games. Either of these devices strikes me as a good buy unless you’re a hard-core AirPlay user or iTunes customer, in which case you might want to keep waiting for the long-rumored next-generation Apple TV.

But Apple fans wouldn’t even have to consider Roku if Apple hadn’t been so sluggish in updating the Apple TV. Years have passed with only a single noteworthy hardware change — an upgrade from 720p to 1080p resolution in the third-generation model — and despite years of rumors, the only real changes have been software tweaks and new channels. Everyone seems to agree that a major refresh is overdue: the Apple TV now needs an app store, proper game support, and advanced search features just to catch up to where Roku is right now. I continue to hope that the refresh will happen soon. However, it’s fair to say that Roku’s already selling the device that many Apple TV users have been waiting for. It’s really just a question of how many people will spend $70 or $100 to give it a shot.