Opinion: Don’t judge – Apple Watch accessories are supposed to be personal, not universal

Over the past fifteen years, I’ve seen certain commenters pick the same fight literally every time Apple releases another device: “are accessories really needed for _____?” Fill the blank in with “iPod,” “iPhone,” “iPad,” “Apple TV,” or “Apple Watch” and you’ll see how the answer has eventually turned out to be “yes” every time. Even though I’ve tested virtually every type of Apple accessory out there, I couldn’t help but shake my head when companies first announced cases for the Apple TV’s remote control. Crazy, right? But there were eventually behind-TV mounts, Bluetooth keyboards, and universal remote controls that became truly handy for even Apple’s least-accessorized device.

Now the Apple Watch is coming, and despite Apple’s focus on its purely aesthetic customizability — including welcoming third-party band makers to the party — the “is this necessary?” comments are appearing again. “Nothing like a faux carbon fiber decal on your watch to convey your sense of good taste,” said one commenter, who separately opined that “every protective product listed here is the modern day equivalent of plastic-covered furniture.” To be honest, I personally agree with the first sentiment, but I’m not the target market for stickers. And I can still remember some people describing iPhone cases as plastic-wrapped furniture, back before Apple started selling them, too. So who’s actually right here, a handful of anonymous commenters acting as arbiters of universal style, or consumers looking to have fun customizing their new toys to their personal tastes?…

Why you might want an Apple Watch band accessory. Apple has explicitly embraced two types of accessories (thus far) for the Apple Watch: bands and chargers. Each has obvious appeal: if you want to change the way your Watch looks, swapping the band is the easiest (but perhaps not the least expensive) option. And if you want to keep the Watch working after its first day of use, you’re going to need a charger. Both come with the Apple Watch, but Apple’s actively selling additional ones.

If I had to guess what percentage of the watch-wearing population currently changed watch bands with any frequency, the number would be far less than 1%. But Apple went out of its way to make band-swapping easy, quite possibly to accommodate sweaty workouts. Early reviews suggested that the heart rate sensor won’t work reliably with loose-fitting bands, so swapping bands might well become the norm for athletic Apple Watch users. We’re already seeing a ton (seriously, stop launching Kickstarters already) of traditional watch band adapters for the Apple Watch. It’s clear that Apple Watch bands are going to be a thing.

In the near future, smart bands with electronic features will be, too. I’m not going to tell you that I have great confidence in the first crop of combination watch bands and battery chargers that have been announced. My prediction is that most of them are going to be significantly delayed, trainwreck-quality bad, or both. But the Watch’s need for a band with additional power is patently obvious — so much so that Apple actually patented flexible, wristwatch-ready batteries back in late 2011. It’s only a matter of time until someone, possibly Apple, does this right. And Pebble Time developers will be working on this and other smart straps in the meanwhile.

Why you might want an Apple Watch dock. Every Apple Watch comes with one of Apple’s official Magnetic Charging Cables. The charger attaches to the back of the Watch, which then sits on a table, a point that some reviewers noted was less than ideal. Docks capture the Magnetic Charging Cable and convert it into a stand that looks nice while keeping the Watch from scuffing. Early options I’ve seen are actually pretty cool-looking — frankly a lot better than most of the watch band hacks that have been announced. And Apple is already making its own docks for Edition customers and its retail stores, an official acknowledgement of the category’s value. After a second band, a stand would be my next major purchase.

Why you might want Bluetooth headphones or speakers for your Apple Watch. Even if you already have headphones or speakers for your iPhone, you might not have wireless ones. Since the Apple Watch doesn’t have headphone or Lightning ports, Bluetooth is the key way to listen to music. There are plenty of Bluetooth headphone models out there — I’m personally a fan of Plantronics’ BackBeat Go 2 — and an insane number of Bluetooth speakers to choose from, such as Bose’s SoundLink Mini. My guess is that a lot of people will quickly understand the value of wireless headphones for workouts, and spare speakers for offices. 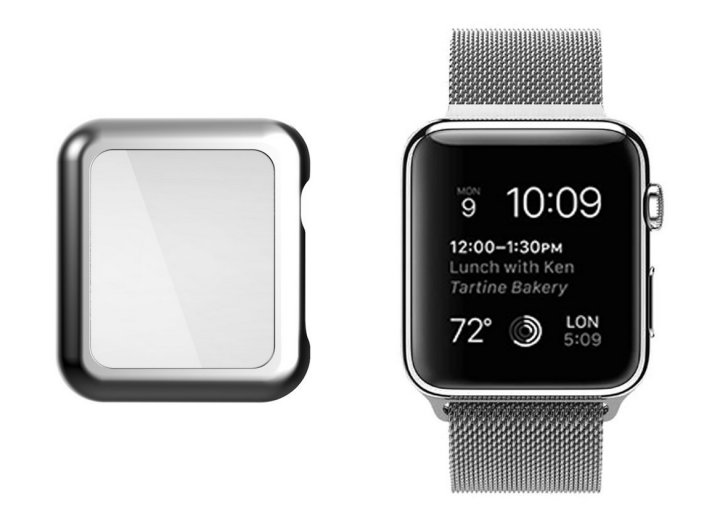 Why you might want an Apple Watch screen protector, case, or sticker. Here’s where the accessorizing becomes contentious. Some people just hate these things, no matter what Apple device we’re talking about. The logic is simple: Jony Ive and team make beautiful things, and protectors cover them up. But after finding that nearly 80% of iPhone users use cases, Apple started selling them (and many of its own cases have been pretty mediocre). It also shipped rubbery iPad cases on day one, and has been selling them for years. I personally can’t imagine putting a case on my own personal watch now, but that’s just me. People have used Swatch and Casio protectors for decades.

If you’re buying a steel Apple Watch or gold Apple Watch Edition, you probably wouldn’t even consider wrapping it in something else, unless that something else is another, more precious material. Both of these models have sapphire screens that should be very resilient, and hopefully Apple’s Mordor-forged metals will stand up well to the sorts of things that just happen to watches — accidental bumps against door frames, brushes against desks, and so on. The difference in materials is basically Apple saying that if you spend $549 or more for your Watch, it’s pretty much good to go. (Except in the pool or ocean. You might want a waterproof case for that.)

But most of Apple’s orders were probably for the less expensive Sport versions of the Watch. Their faces are protected with glass rather than sapphire, and their bodies are made from aluminum, like the iPods, iPhones, and iPads people have been scratching and denting for years. Buyers of these Apple Watches have more reason to cover up their Watches, either for protective or cosmetic reasons. I personally think that faux carbon fiber stickers (worse yet, gold carbon fiber stickers) are ridiculous, and wouldn’t wrap them around an Apple Watch. However, adults and kids with varied fashion sensibilities will wear $349 Apple Watches. Some may want to keep their Watches scratch-free for resale when the second-generation model comes out. The stickers, screen protectors, and cases spotlighted by my colleague Jordan Kahn are a cheap way to do this.

Why you might not want any of these things. You’re a purist. You love when Apple’s executives show off their completely bare devices, suggesting cases aren’t needed. You feel it’s only right to use and show off those products just as Apple’s web site hero shots display them. I get it. Everyone else gets it: you really love unadorned Apple products.

But if not for common decency, then for the way your jabs will look when 80% of other users disagree with you, please don’t pooh-pooh people who feel otherwise. Enjoy your Apple Watch, and let other people do the same. How someone else accessorizes a device doesn’t really matter… does it?