Review: ‘Does not Commute’ for iPhone & iPad is a novel driving game with character (Video) 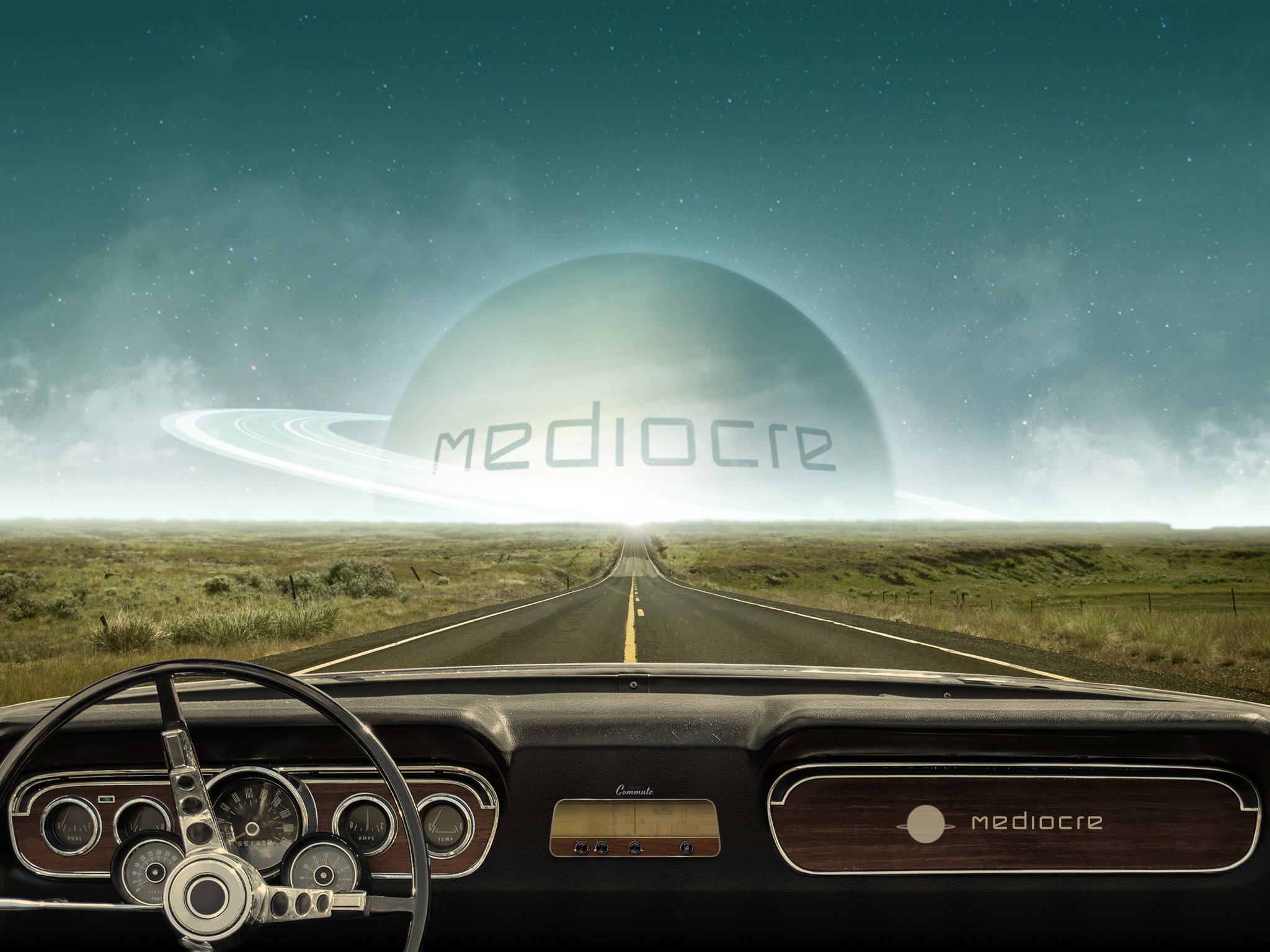 While self-driving cars may be the future of personal transportation, we’re still stuck driving the old-fashioned way for now, and a new iPhone game will show you why the future can’t come fast enough.

Does not Commute is a driving game that tasks you with navigating a car from point A to point B. The car drives forward automatically, and you tap the right side of your screen to turn right, or the left side to turn left.

It sounds simple, and that’s because it is. After you successfully guide your first car across the neighborhood to its exit point, you’ll be asked to do the same with a second car with new starting and ending points.

That’s where the game starts to get tricky. Every time you start a new car, you have to find a path to the exit that keeps you from ramming into your other vehicles as they replay the exact routes you just drove. Things can get hectic pretty quickly. There are 13 cars on the first level alone. 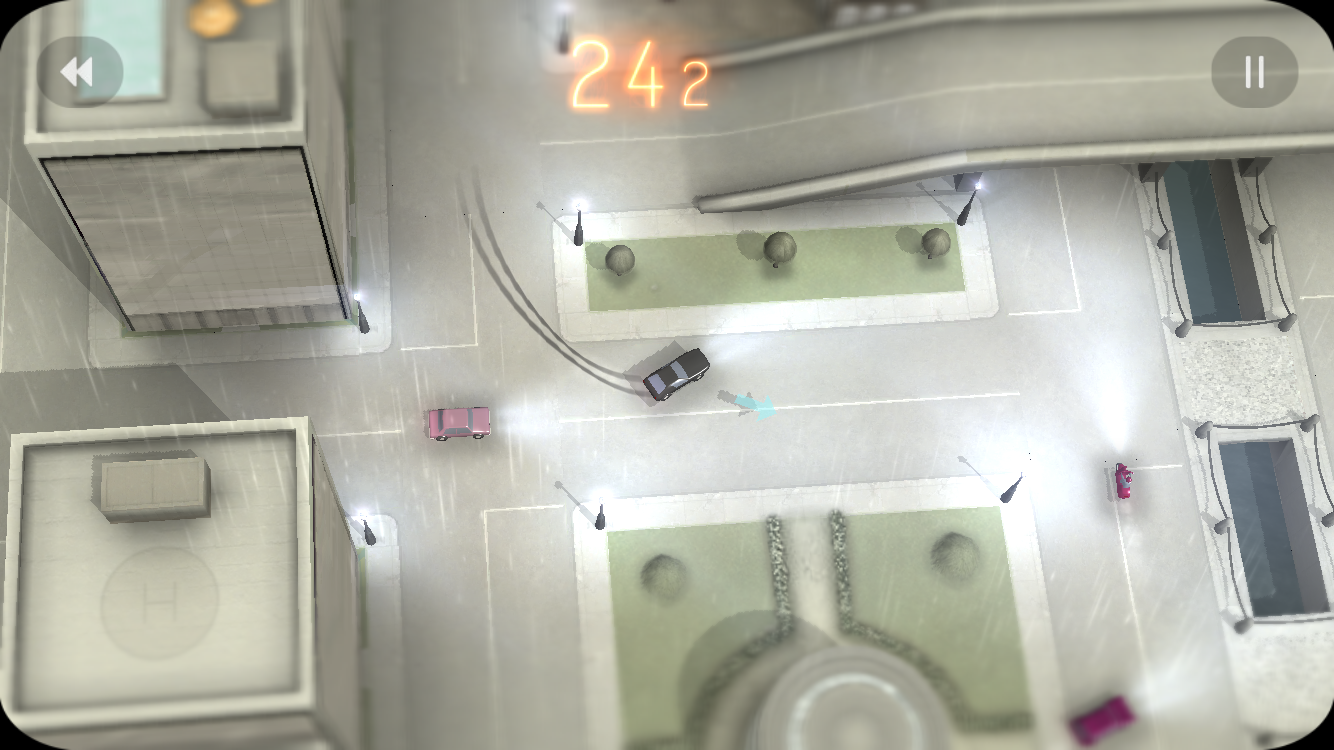 As you progress through the game, you’ll be given other types of vehicles to drive, including ATVs, mopeds, and boats. Each one handles a little differently, providing an extra challenge in navigation. For example, top-heavy ice cream or garbage trucks hug tightly to corners, while others drift in wide arcs, often sending them careening into other cars or buildings.

When you start the first level, you’re given only 60 seconds of drive time to complete it, and while crashing a car doesn’t immediately disqualify you from finishing a run, it will make things significantly harder by slowing you down quite a bit.

If you do happen to wreck or just have a bad run, you can use the handy rewind feature by tapping the button in the upper-left corner to restart your current car. That convenience comes at a cost, however, as doing so will knock one second off of your remaining time. That may not seem like much, but if you have to restart a car five or ten times, it can quickly take out a large portion of your timer. 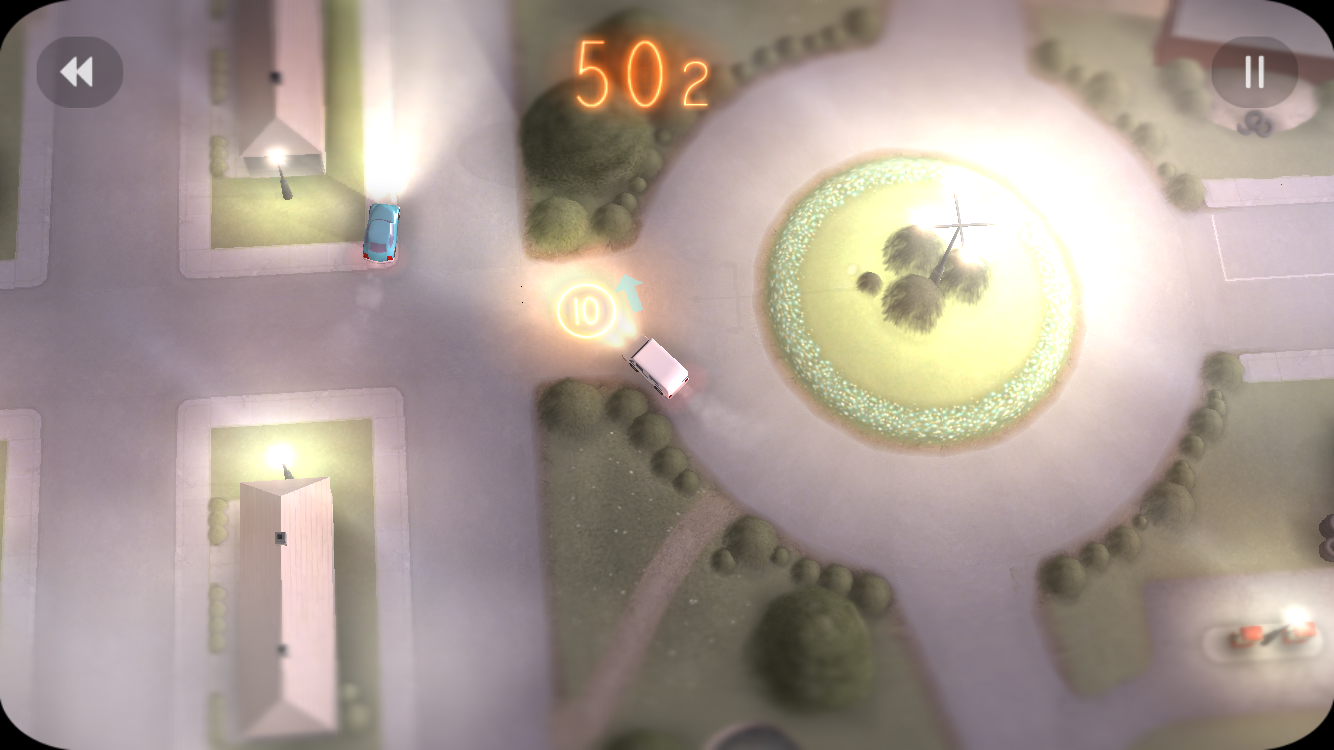 You can also gain extra time by driving over tokens that appear on the map. They’ll reward you with an additional few seconds to finish your commute, and they’re very important in making sure that you’re able to reach higher levels because the timer carries over between each map, meaning any time you waste on the first level is time you won’t get back on the second.

Finishing levels will earn you new power-ups that can be used to enhance certain aspects of your car. A turbo boost can increase your speed, but will wreck your handling. Armor can make your car invincible in the event of a collision, but will drag down your acceleration.

The gameplay on its own might quickly become tedious if not for the inclusion of a quirky cast of characters that you’re responsible for getting through their daily lives. While some of these citizens are simply trying to get to work or the grocery store, others have more unusual plans.

You’ll see a lot of the same characters pop up across levels, along with relatives and friends. Everything that happens in the game is connected to a bigger story. If you pay close attention to each driver’s introduction, you’ll start to see patterns emerge. 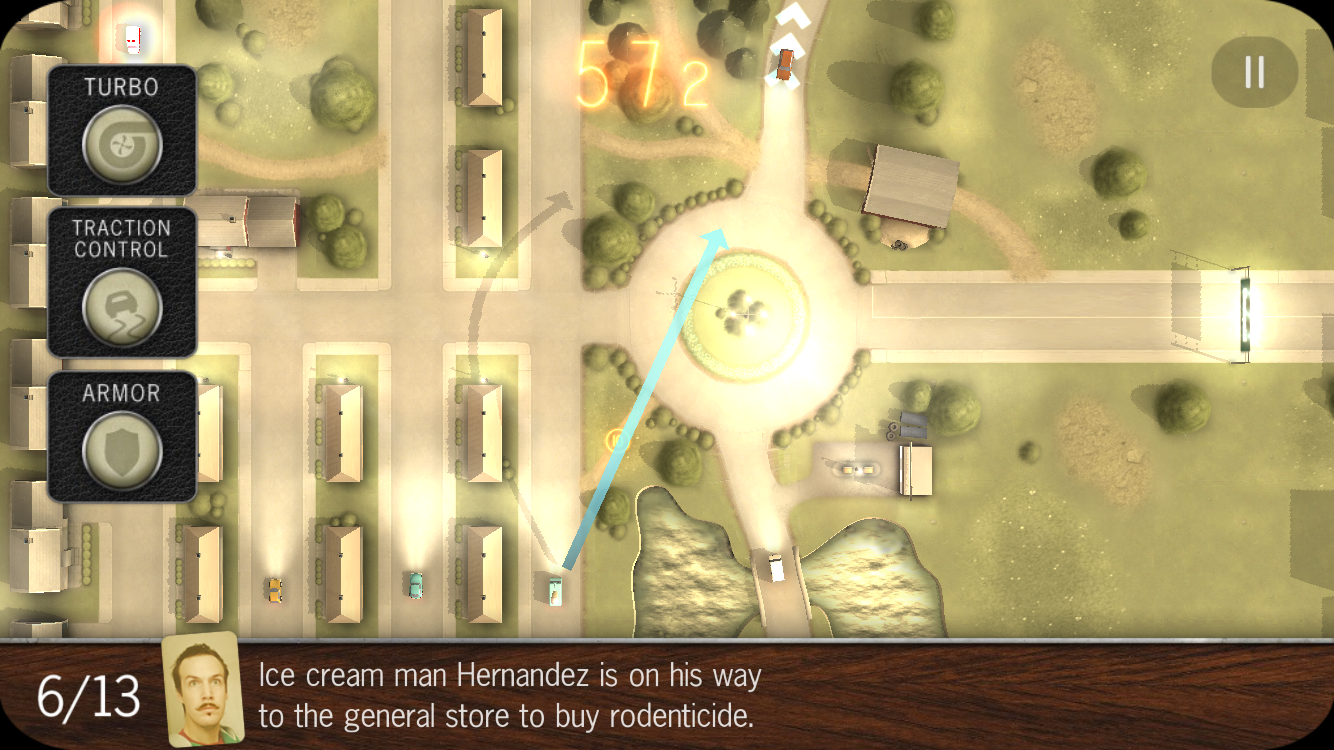 For example, in level one, ice cream man Hernandez goes to the store to buy rat poison. In level three, he takes his ice cream truck to the beach, where a family soon becomes sick. Self-proclaimed federal Time and Space Investigator Ben Womack follows a trail of strange happenings while his sister Jennifer searches for him. Mr. Lee… well, he isn’t Mr. Lee at all. No one knows where the real Mr. Lee is.

The final character that you control for each level will seamlessly become the first character in the next level, naturally continuing their individual story and allowing the day to progress.

The people aren’t the old little details that give the game’s city a realistic feel. Other examples include changing weather patterns, cars that honk when they pass too closely to each other, and kids that scream when you crash a school bus. 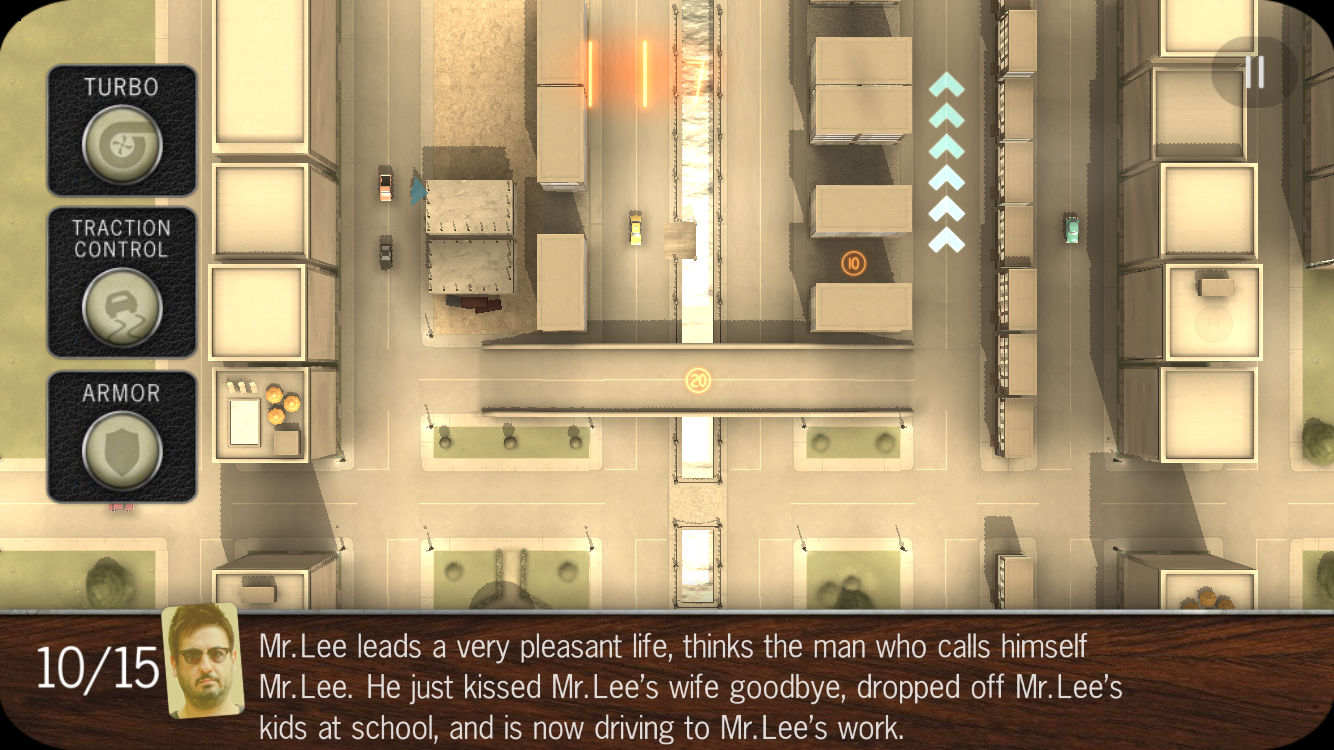 After you complete each level, a replay of your best run will be automatically saved. You can access the replay from the main menu. Once you’ve started playback, you’ll have three different camera angles to choose from.

The first follows each car individually through its route, showing the driver’s photo and destination information at the bottom. You can shift through the drivers manually using two buttons on the screen, or automatically at the end of each car’s run.

A second angle gives you a bird’s-eye view of the entire level as the cars simultaneously make their way from beginning to end, revealing some slick vehicular choreography. The third view pans across the map as the cars travel across their paths.

Does not Commute also automatically saves your best time for each level, so if you finish the first level with 100 seconds left on the timer, you’ll always have 100 seconds when you start the second level, even if you go back to retry the first level and end up with a dramatically worse time. 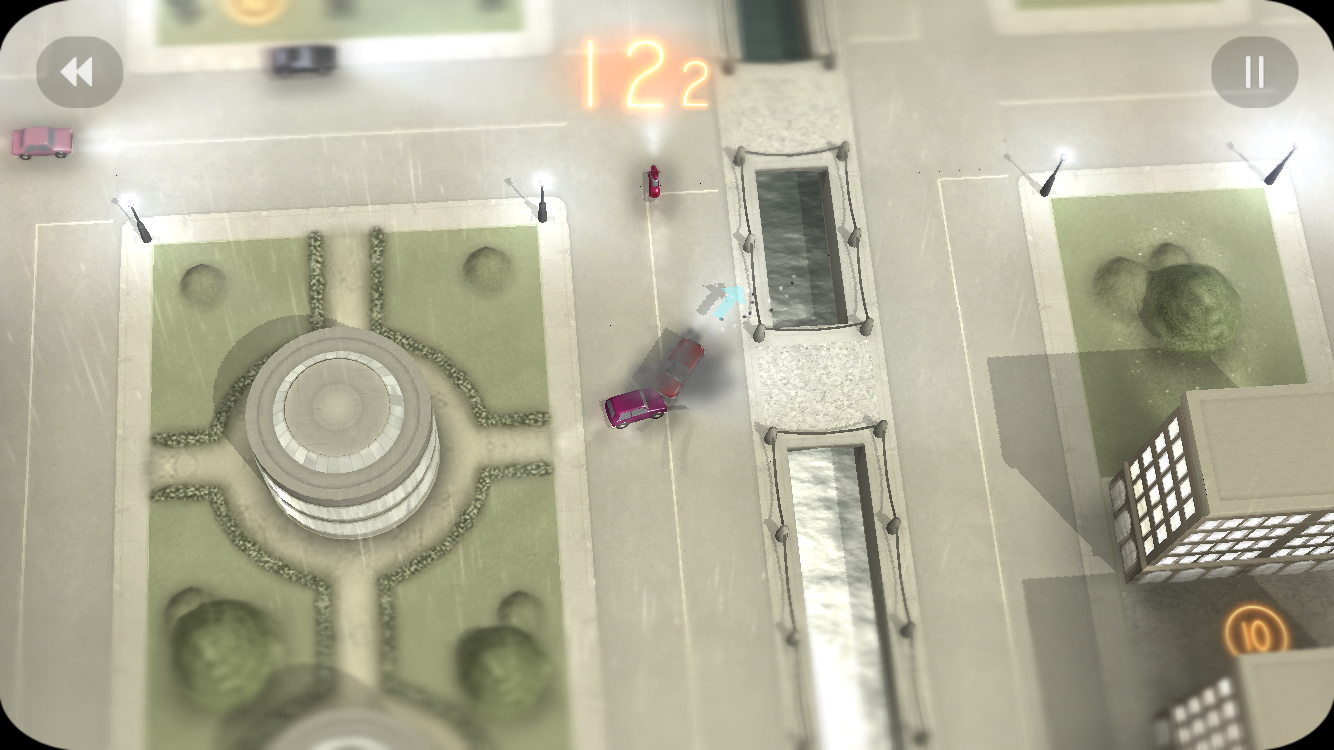 Unfortunately, there’s a small downside to this auto-save feature, which is that it doesn’t allow you to choose which replays get saved. If you pull off a move you’re particularly proud of, there isn’t a way to go back later and show that moment to someone else. Hopefully on-demand, shareable replays can will added through an update.

While Does not Commute is free to download and play, you won’t be able to resume a saved game without unlocking the checkpoint feature. You can unlock that feature by getting the premium version of the game through a $1.99 in-app purchase.

If you quit or run out of time without buying the premium update, you’ll have to start over from the beginning of the first level. Not to worry, all of your progress is still saved so that when you make the purchase, can pick up right where you left off.

I don’t typically make in-app purchases—I’ve bought maybe two since they were introduced in iOS 3—so when I say that I highly recommend buying the premium upgrade, it’s not a statement I make lightly. Does not Commute has quickly become one of my favorite iOS games, and since it’s available for free on the App Store, you can take it for a test drive yourself before spending any real-world money on it.

I give Does not Commute 4/5 stars.