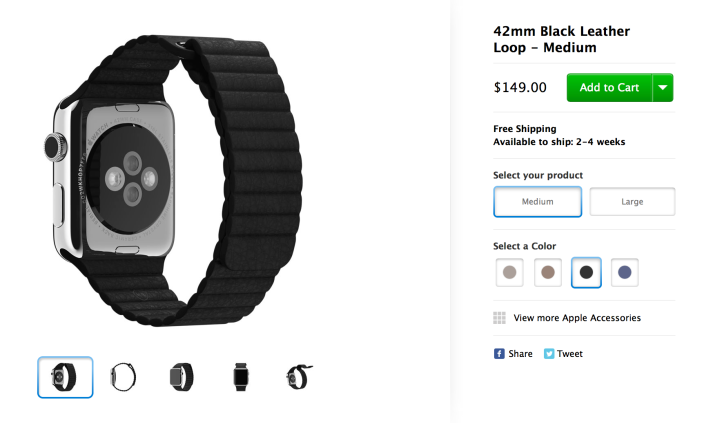 Earlier this week the first standalone Apple Watch bands began shipping to pre-order customers including Link Bracelet and Leather Loop, and today shipment times for both sizes and all four colors of the Leather Loop band have improved from sometime in June to 2-4 weeks suggesting new purchases could be delivered as soon as late May.

Both sizes of all six variations of the Sport band now show promised ship dates of 2-4 weeks rather than the more general May delivery date. The 38mm and 42mm Classic Buckle band has also changed from May to 2-4 weeks. Unlike Leather Loop’s change, however, Sport’s and Classic Buckle’s change is likely to due with standard fluctuation as we go further into May.

As Apple continues its online exclusive Apple Watch availability, we first reported yesterday that the company appears to be readying an in-store pickup option for the near future as the online store quietly started showing the option, albeit without current availability just yet. Previously, Apple revealed that it’s targeting sometime in June to begin in-store Apple Watch sales for the first time. Similarly, Tim Cook revealed last week that the Apple Watch is on track to be sold in more countries around late June.