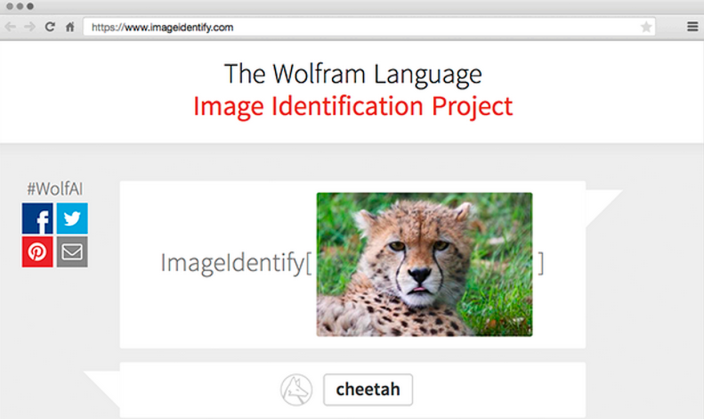 Wolfram Research, the company behind the Wolfram Alpha knowledge base that Apple’s Siri taps into, is today releasing new artificial intelligence tech to answer the question, “What is this a picture of?”

Wolfram is showing off what the Wolfram Language Image Identification Project is capable of using this web app accessible on desktop and mobile devices. You simply drag any photo into the app and the image identification AI attempts to detect what it is (as pictured above).

Now I’m excited to be able to say that we’ve reached a milestone: there’s finally a function called ImageIdentify built into the Wolfram Language that lets you ask, “What is this a picture of?”—and get an answer…. It’s a nice practical example of artificial intelligence. But to me what’s more important is that we’ve reached the point where we can integrate this kind of “AI operation” right into the Wolfram Language—to use as a new, powerful building block for knowledge-based programming.

And the new ImageIdentify function will be accessible to developers to create APIs or apps that tap into the feature through Wolfram Language: “And if one had lots of photographs, one could immediately write a Wolfram Language program that, for example, gave statistics on the different kinds of animals, or planes, or devices, or whatever, that appear in the photographs.”

Wolfram has a lengthy, interesting read on the backstory of the project and more about how everything works behind the scenes.