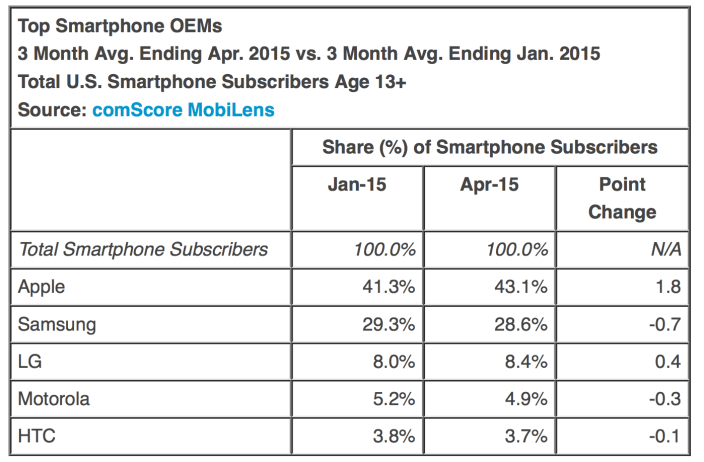 comScore today has released its latest data regarding smartphone market share. The analytics firm says that 188.6 million people owned a smartphone during a three-month period ending in April. That equates to 76.9 percent of the mobile market being made up of smartphones at this point. Apple, according to the data, further strengthened its lead. The company saw a 1.8 percent increase in market share this time around, going from 41.3 percent in January to 43.1 percent in April.

Of the top 5, LG is the only other manufacturer to see an increase, rising from 8 percent to 8.4 percent. Samsung, Motorola, and HTC all three saw a decline in market share. Samsung, still ranked number two, fell from 29.3 percent to 28.6 percent. Motorola fell from 5.2 percent to 4.9 percent, and HTC, who has been struggling greatly recently, fell from 3.8 percent to 3.7 percent.

In terms of platform market share, Android remains on top, although it did see its lead dwindle. Android fell from 53.2 percent of the market to 52.2 percent, while iOS saw its market share increase from 41.3 percent to 43.1 percent. Microsoft’s Windows Phone fell from 3.6 percent to 3.0 percent, while BlackBerry saw its share fall to 1.5 percent from 1.8 percent.