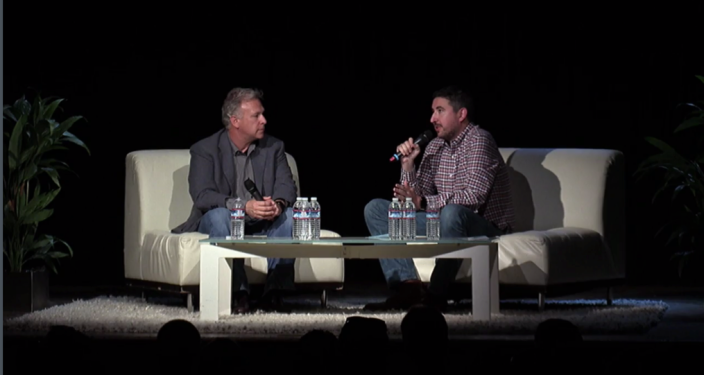 Apple’s SVP of marketing Phil Schiller this evening gave an interview on John Gruber’s podcast The Talk Show during which he addressed a variety of different topics. Gruber and Schiller together discussed Apple’s WWDC announcements, such as watchOS 2 and Apple Music. The two also talked about many of Apple’s decisions over the past couple of years, including the company’s obsession with making the thinnest devices possible and how on earth they still sell 16GB devices in 2015.

Gruber asked Schiller about the length of this year’s WWDC keynote, which was seen by many as too long. Schiller responded that Apple tries to keep keynotes between 1:45 and 2:15 and noted that the company cut a lot of stuff in order to keep this year’s presentation a reasonable length. When Schiller mentioned Apple having to cut presentations, someone in the audience shouted “Apple TV,” to which he responded that he was actually referencing how Apple didn’t get to show the new power features of iOS 9 on stage.

Regarding the release of an SDK for native Watch apps, Schiller compared the late launch to how the iPhone was available for only a year with web apps. Apple, of course, announced Apple Watch last September and followed the announcement with WatchKit, not an SDK. A native Watch SDK won’t be released until later this year, a move that puzzled many in the developer community.

Schiller and Gruber also discussed Apple Music, with the Apple executive noting that it makes sense to still buy albums and that he himself still buys ones that he really enjoys. Eddy Cue and Jimmy Iovine recently gave an interview with The Guardian in which they went more in-depth regarding some of the decisions made about Apple Music. The two noted of the importance of the “human touch” when it comes to curating music, while also pointing out the $9.99 plan is the perfect price.

Gruber also asked Schiller why Apple still sells 16GB iPhones and iPads in an era when app sizes are so big and the price of storage is so low. Schiller, of course, defended Apple’s move by saying that the cloud makes up for the lack of physical storage on the 16GB model. At WWDC this year, Apple announced a handful of features to improve the experience on smaller capacity devices, including reducing the amount of required free space for iOS updates and thinning many apps.

Following that discussion, Gruber and Schiller talked about Apple’s desire for creating ultra-thin devices and the criticism it gets for perhaps focusing too much on thinness and not enough on battery life and performance. Schiller claimed that Apple has struck the perfect balance between battery life and thinness, noting that if you want a larger battery in a device, its “heavier, more costly, and takes longer to charge. We model every thickness, every size, every weight and try to figure out what the tradeoffs are. I think we’ve made great choices there.”

The discussion surrounding thinness, of course, led into Gruber asking Schiller about Apple’s new 12-inch MacBook. Schiller said that he has a Space Gray model and loves how thin and portable it is. As you would expect, Schiller defended Apple’s decision of only including a single USB-C port on the device, saying that as company, it has to take risks in order to succeed. “If all we do is an incremental, slight change, where’s the excitement? We have to take risks. That’s the Apple I want — an Apple that’s bold and taking risks and being aggressive.”

While you wait for the latest episode of The Talk Show with Phil Schiller to be uploaded, catch last week’s episode on which our own Mark Gurman was a guest.

Update: The audio for the interview is now live. The video will come in a day or two, according to Gruber.

The Talk Show Live From WWDC 2015 from John Gruber on Vimeo.