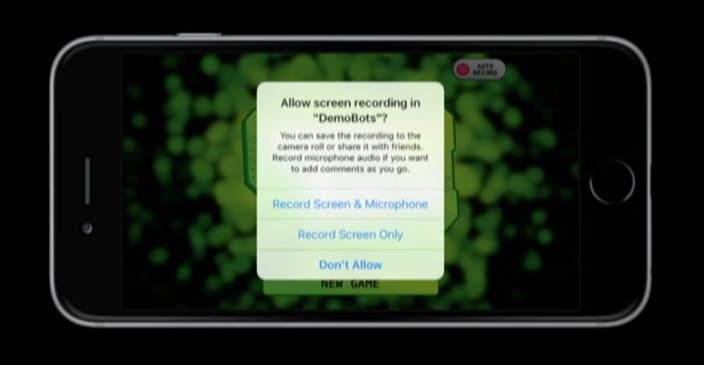 The recording can be initiated by the user manually or developers can implement automatic recording. Manual recording might be ideal for games like RPGs, for example, where users play for extended periods of time and only want to share a single moment or snippet of the extended gameplay session. In addition to simply recording, ReplayKit allows users to add voice commentary and access basic editing features for playback/scrub/trim. Users will have to allow screen recording for privacy reasons through a typical iOS pop-up that allows them to select to record the screen only, both the screen and audio recording with the microphone, or to not allow recording.

There’s not much to it from a developer’s perspective with the core functionality only requiring a few lines of code. But it’s also pretty bare bones in terms of features when comparing the platform to alternatives like Kamcord, a free SDK and user community for gameplay recordings on iOS and Android. That service offers a user community, editing features, and sharing/social features beyond what’s included in ReplayKit, such as the ability to upload via the web and its standalone Android app. ReplayKit also won’t work simultaneously with AirPlay video or TV-out, as it taps into the same technology.

Prior to ReplayKit, devs would need to implement an SDK like Kamcord or users would have to use a hacked together solution that uses a Mac or other external gear to record the iOS device’s screen. So far that means screen recording features have mostly been limited to the under 600 or so games that have implemented a third-party SDK. We reached out to Kamcord to get their thoughts on ReplayKit and the company offered the following statement:

“Kamcord’s goal has always been to create the #1 destination for mobile gaming content. Making it easier for people to share from all their favorite games is great news for us. We welcome mobile gaming content recorded from any source whether it be our industry-leading SDK with its community features or from ReplayKit.”

The introduction of the new API for screen recording is timely as third-party solution have gained a lot of traction over the last year. It also comes not long after Android implemented a system-wide screen recording API in Android 5.0 Lollipop that makes recording and sharing videos of games and other apps easier for all.

Kamcord just this month launched support for screen recording of any game, not just those using its SDK, through the new Android screen recording API. Last summer it said it was uploading around 1 hour of gameplay recordings every minute and in December announced a $15m Series B round led by gaming heavyweights GungHo.

The bigger players also see the market as big business, evident from Amazon’s reported $1 billion acquisition of video game streaming site Twitch in August.  And with iOS 9 the market is bound to continue growing as more apps implement recording features natively and more gamers embrace the trend on mobile devices.