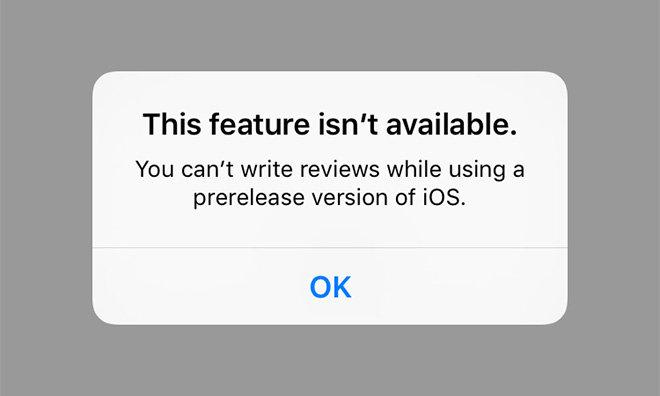 In a move that will certainly please iOS developers, Apple has finally disabled the ability to write app reviews on the latest beta version of iOS 9. When attempting to review applications in the store, beta users will now be met with a message informing them that the feature is unavailable. The change was spotted by several Twitter users earlier this evening.

App makers have long been put off by low reviews from users experiencing problems related to unsupported versions of the mobile operating system, which often hurt an app’s overall ratings and possibly affected their downloads as potential buyers took note of the negative feedback without knowing the full context.

Developers have been calling for this change for some time now, so it’s nice to finally see Apple implementing a solution for the problem. Even as late as this afternoon, some apps were being updated to fix issues in the unreleased OS and alleviate customer complaints. While some developers may continue doing so to ensure that their customers can keep using their apps, it will thankfully no longer be necessary to avoid a bad write-up.

Whether Apple will (or even can) remove existing reviews from beta users is unknown at the moment, though it seems likely they’ll simply let the ones that have already gotten through stay up and allow new reviews and app updates to eliminate them over time.