Opinion: Here’s why I’m still jailbreaking my iPhone on iOS 8.4

With iOS 9 coming out later this year, there will once again be a number of articles proclaiming that jailbreaking is now unnecessary because so many of the most popular tweaks have been added as native features. While jailbreaking may not be as popular as it was in the iOS 4 days, there are still a lot of great reasons to give it a try.

I recently downgraded from iOS 9 to jailbreak my phone again. Here are just a few reasons I recommend you consider jumping off of the beta bandwagon.

The iPhone status bar has undergone very few changes since the first model shipped in 2007. New icons have been added, and they’ve all been redesigned at least once, but there hasn’t been a meaningful reexamination of what actually goes in the status bar.

One example that I often use to highlight this problem is the alarm icon. I use my iPhone as my daily alarm clock. I’ve got alarms set for every day of the week. I know this, and I don’t need to see a constant reminder in my status bar that I have active alarms. Currently, there’s no way to get rid of that.

Bluetooth is another example. I leave mine turned on all the time. When I get in my car, it automatically connects, and I don’t have to futz around with anything. I don’t need to see an icon in my status bar reminding me that Bluetooth is running. And if you use the Apple Watch, it’s a requirement to stay connected so you’re likely never disabling it. I can check Control Center if I really need to know, which I never have.

On the other hand, there are icons that I would love to see in my status bar, but Apple has decided against adding. New emails, Twitter notifications, missed calls, voicemails, unread text messages, and more are all pertinent information that I would love to be able to see at a glance, but as things are now, I have to back out to the home screen and look for badges on app icons or use Notification Center. Neither are universally visible at a glance.

Protean is a tweak that’s designed to solve all of these problems. It’s a highly-customizable status bar modification that lets you remove, rearrange, redesign, or replace your status bar icons. The feature set is way too long to get into in this one post, but here’s a quick overview of what you can do:

Protean supports all of the countless icon packs previously designed for a similar tweak called OpenNotifier that no longer appears to be in development.

Polus is a Control Center customizer that lets you put just about anything in the slide-up control panel. You can create shortcuts to your favorite apps, toggles for system features like hotspot and vibration, and more. It also allows you to tweak the design of Control Center’s icons to fit your own taste.

iMessage conversations currently include a typing indicator view when one of your contacts starts replying to a message, but you can only see that when you’re actually in the thread view. TypeStatus is a free tweak that puts an icon in your status bar to show when someone is typing.

There are two different options for how this icon can be displayed. One is just a small speech bubble that appears alongside other icons. The other (my personal choice) takes over your whole status bar for a customizable period of time (say, five seconds) and shows you the full name of the person typing, then restores your regular status bar.

The tweak can also show a similar notification when you get a read receipt.

ReachApp is a clever tweak that brings split-screen multitasking to iOS 8.4, but unlike Apple’s implementation in iOS 9, it’s not limited to the iPad. With this app, triggering Reachability moves your current app halfway down the screen, then populates the top half with a customizable list of your favorite apps, recent apps, and (optionally) a list of every app on your device.

Tapping one of these icons then puts that app on the top half of your screen. A handle between the two apps lets you resize them to fit your needs.

The tweak is still very much in beta right now, and a lot of apps have trouble running in this mode, but it’s very interesting to play around with and will certainly be a compelling tweak when it’s finished.

MusicMod’s name pretty much gives away what it does. With this tweak, you can make a number of changes to the stock Music application on iOS 8.4. The changes include disabling certain parts of the interface (like the “Recently Added” section in the playlist tab), disabling parts of Apple Music (like Connect, or Radio) while still keeping the ability to use search to find any music through the service.

You can also tweak the Now Playing screen to remove the status bar (which is poorly placed directly on top of the album artwork), get rid of the blurred artwork that appears behind the music controls, and more.

One feature that’s still marked as being in beta also adds support for turning the Music app into landscape mode.

While a lot of apps have been updated with support for Touch ID, some people may be looking to lock others (such as stock apps) behind their fingerprint. Asphaleia lets you do just that, along with protecting functions like powering down the phone with a Touch ID lock. You can also lock down Spotlight, multitasking, Control Center, and more.

Flex 2 doesn’t actually do anything on its own. Instead, it serves as a platform for creating, sharing, and downloading patches created by other users. It’s not quite like Cydia in that there are no standalone tweaks here. Flex just lets you make changes to apps currently installed on your device by changing values and settings that are normally inaccessible to users.

For example, you can add contact photos to the Messages app on devices other than the iPhone 6 Plus. You can get rid of the nearly useless search bar in the Messages app as well. A whole collection of patches for Facebook let you hide annoying parts of the UI, disable video autoplay, use the app in landscape, and much more.

Patches like this exist for just about every popular app that’s available. The Flex app automatically sorts patches by application so you can quickly find what you’re looking for.

Apps like Flex are where jailbreaking really has a chance to shine by enabling users to more directly customize individual apps. These patches may not make any huge changes to the system or add big new functionality, but by fixing annoyances in the apps you use every day, you can make your phone much more enjoyable.

This makes Facebook default to the Most Recent feed rather than the curated news feed the app currently uses. That feed gets moved to the More tab. This is another one of those little things that make using Facebook that much easier. 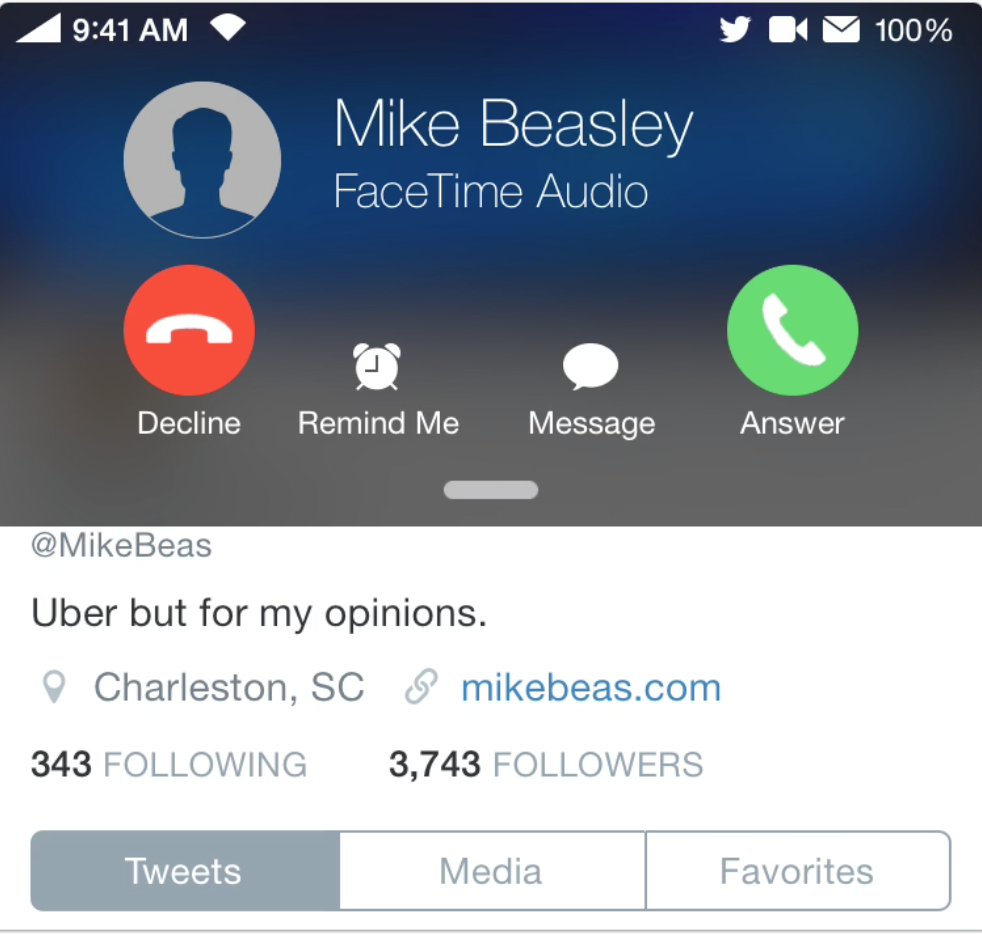 When you get an incoming phone or FaceTime call, the Phone app takes over your entire screen and makes you decide whether you want to take the call or not before allowing you to continue with whatever you were doing.

CallBar changes the incoming call behavior and shows a notification banner for incoming calls. It’s not just a regular banner, though. The CallBar is larger than your usual notification to accommodate buttons for accepting and declining. Once you’ve picked up a call, you can access all of the same features that the regular call screen presents (mute, merge calls, keypad, and so on), but without losing your place in your current app.

CallBar can also act as a full Phone app replacement. You can use a customizable gesture (or, optionally, tap the Phone app icon) to pull up a similar banner that contains all of the phone app’s functions: favorite contacts, recent calls, contacts, a full keypad, and voicemail access. My only qualm with this part of the tweak is that it doesn’t provide visual voicemail access, and the developers have said they have no intention of adding that.

Regardless, CallBar is a pretty solid tweak with some great functionality.

Cask is a tweak from famed developer Ryan Petrich that brings Google Plus-inspired scrolling animations to table views throughout iOS. It’s a bit buggy on iOS 8.4 right now (the info page specifically says it hasn’t been updated for that OS yet), but it works well enough that you shouldn’t have any major problems.

You can choose from a small selection of effects, including fading, growing, and sliding in from the right, for the cells of each table as you scroll. You can also customize the timing to decide how long the animation should take to complete.

While Apple has greatly improved animation speeds in iOS since version 7 was first released in beta, there’s always more room for improvement. NoSlowAnimations lets users change the duration of most system animations to speed things up a bit.

Rather than making you choose a specific time for each animation to last, NoSlowAnimations lets you scale all of the animations at once using a slider in the Settings app. Setting the slider to .70, for example, will cause animations to take only 70% of the usual time.

Another great (and simple) Ryan Petrich tweak, SearchSettings puts a search bar at the top of the Settings app so you can quickly find what you’re looking for. Since this feature appears in iOS 9, downgrading your phone solely to install this tweak doesn’t make a lot of sense, but it’s a good one to keep on hand if you go back for other tweaks.

ShowCase has been around for years and is a feature recently built into iOS 9 as part of the new keyboard. It shows lowercase letters on the keyboard when your shift key is off and capitals when the shift key is on. This one is a big help to me, as my thumb is almost always hovering over the shift key and preventing me from seeing whether it’s on or off.

Like SearchSettings, this one’s not worth downgrading and jailbreaking for by itself, but it makes a great companion to many of the others on the list.

This is just a small sampling of what’s currently available for iOS 8.4. Many new tweaks are being released every week (sometimes dozens per week). As Apple continues to add new features and apps to iOS, developers will continue finding new ways to take advantage of them.