watchOS 2: Walkthrough of all the new features now available on Apple Watch

After slightly missing the originally announced release date due to a last-minute bug, the watchOS 2 software update is now available for downloading through iOS 9’s Watch app and installing on your Apple Watch.

watchOS 2 comes just six months after the Apple Watch officially launched, and what Apple is labeling as a full successor to watchOS 1 feels a lot like a more polished version of what it likely had in mind from the start. It incorporates a few features first shown off last September and even includes fixes for a few common complaints over the original software.

The big story with watchOS 2 is support for native apps, which launch quicker and have more access to hardware, but there’s several small changes within the update worth discussing as well. Let’s explore:

Time-Lapse presents a high-speed video of Mack Lake, New York City, London, Paris, Hong Kong, or Shanghai. Each time you raise your wrist, Time-Lapse races through the day to show you the current time of day in each spot based on your location. 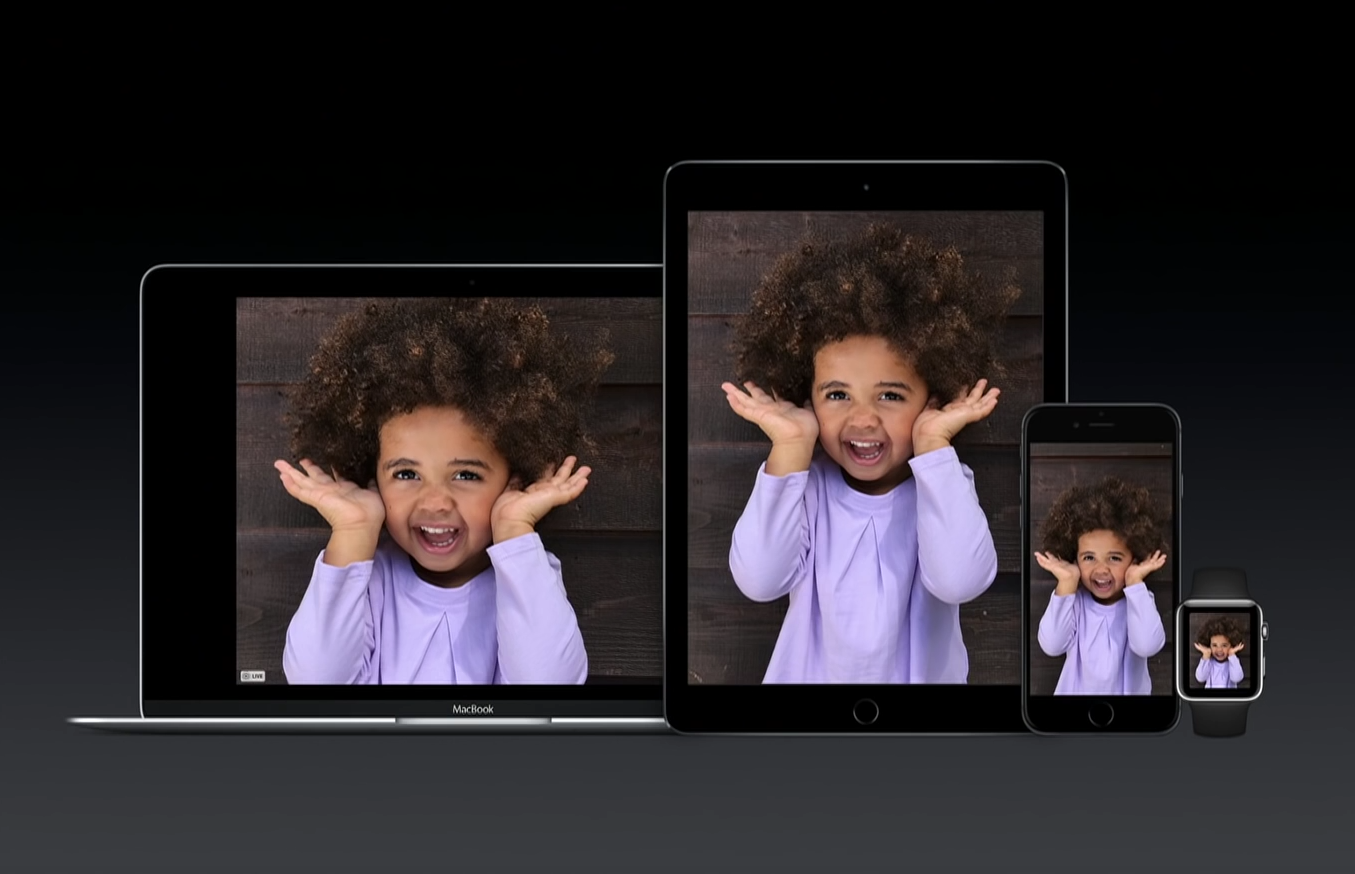 When iPhone 6s and iPhone 6s Plus launch on September 25th, Apple Watch users will also be able to set personal Live Photos as the watch face. This should serve as somewhat of a cross between the Time-Lapse and Photo watch face: animated but your own image.

Speaking of more color, the Watch-to-Watch form of communication called Digital Touch splashes some into Sketches. Sending drawings to friends with Apple Watches was previously limited to picking just one color. Now watchOS allows you to pick from each available color when drawing. It can be a bit of a race to choose multiple colors for a sketch, but it allows you to be more creative and just might boost my usage of the feature. watchOS 2 also improves how multiple instances of Digital Touch is presented.

Adding and managing Friends, or the contacts you see when you click the side button below the Digital Crown, is also improved with watchOS 2. Friends previously limited you to picking 12 contacts and had to be managed mostly from the Watch app on iPhone. watchOS 2 lets you set Friends directly on the Watch, and you can create multiple pages of groups on Apple Watch and manage them on the iPhone’s Watch app.

Apple Watch relies heavily on dictation and Siri for accomplishing lots of tasks, and watchOS 2 greatly improves on Siri’s capabilities. Both speech-to-text and Siri has a new look in watchOS 2, matching iOS 9 and tvOS with more colorful 3D wave forms. Siri can also do more like open glances, the app cards you can swipe up to see on the watch face for quickly peaking at information, even if you don’t have the app’s glance saved in your rotation.

Siri could also launch apps with commands like “Open Workout”, but now saying something like “Start an elliptical workout” will jump you right into the specific workout without any extra steps. There’s also dictionary support for looking up words and tip calculation if you don’t want to use paid Apple Watch apps like Calcbot or PCalc.

While there’s plenty more with Siri on watchOS 2, it’s largely refinements to improving on how old commands were handled. You should see fewer requests for using Handoff to send a task to the iPhone, and when you do there’s now the option to run it on the iPhone which makes the process much faster. Other tasks like sending a text or iMessage to someone now works just as you would expect; it previously required multiple voice commands or actually interacting with the display. You can also start playing Beats 1 on your iPhone with an Apple Watch Siri command whereas iTunes Radio would cause trouble for the voice assistant.

The first version of Apple Watch’s operating system omitted several key iPhone apps that could be useful on the wrist like Notes and Reminders (I’m using Fantastical which supports iCloud Reminders as its replacement). While watchOS 2 doesn’t make any progress here, a few from the existing set of Apple apps have improved.

Music picks up the Apple Music version icon and improves switching between locally synced tracks and songs on your iPhone without requiring Force Touch. The app is also redesigned with improved navigation that highlights album art in a Recently Played section.

As I mentioned at the top, native apps is the real story with watchOS 2 for both developers and users. Third-party apps from the App Store can now load directly on Apple Watch and rely less on sending data back and forth between the iPhone, although it’s still required for some processing power and the data connection. The result is fewer instances of getting stuck on a loading screen and just pulling out your iPhone to do whatever you had in mind.

watchOS 2 apps can also do new things like offer their own watch face complications. These especially shine on larger widgets like the bottom spot of Utility and the middle spot in Modular. Examples we’ve seen so far include breaking news from CNN and chance of rain from The Weather Channel, and I’m testing some really useful third-party complications that are on the way. Also there’s Buzzfeed’s super useful complication for … declaring I have no friends? Okay, it’s actually a virtual pet of sorts that eats pizza and lounges around. On your wrist.

Aside from weird virtual creatures that live on your watch face, watchOS 2 apps can potentially do a lot more without your iPhone and even replace Apple’s Workout app for capturing fitness data. We’re only just now seeing the first native Apple Watch apps become available, but this space should quickly progress as more developers finish up watchOS 2 apps.

Now for all the (really) little things that amount to a nicer watchOS.

In my initial Apple Watch review, I pegged it as a rather sub-par watch replacement for its inability to just display the time for longer than 15 seconds without interacting with it physically. I’ve gotten along with tapping the display to keep it awake when I need to, but my wife is a nursing student and that solution isn’t ideal. The old trick of rotating the Digital Crown is gone too thanks to a clever new feature called Time Travel. More on that next.

So what did Apple do to improve on this problem? There’s a new option in Settings > General > Wake Screen to set Apple Watch to stay awake for 70 seconds after a tap rather than the previous 15 seconds limit. This is one of my favorite (tiny) features, and I haven’t noticed battery life taking a hit as the display still rests when you lower your wrist.

Rotating the Digital Crown from watch faces with complications now enters a mode called Time Travel. This mode shows you what temperature it will be outside and what events will be up next on your calendar based on how many hours ahead you go; you can also go in reverse to review past events and other supported data points. Time Travel should get especially interesting with third-party complications. I’ve been testing pre-release versions of third-party watchOS 2 apps that really make Time Travel more useful. Another small nicety in watchOS 2: clicking the Digital Crown once from anywhere in the app launcher now zooms you back to the watch face rather than centering to the clock icon first and requiring another click to change modes.

If you’re taking a day off from worrying about filling your Activity rings, watchOS 2 lets you mute Activity alerts for the rest of the day with a new button on each notification. This applies to Activity updates throughout the day as well as those hourly stand alerts if you haven’t moved around within the hour. Think of muting as an Activity app-specific Do Not Disturb mode for the rest of the day. It’s great for times when you’re stuck in the car or on a flight all day or just don’t feel up to meeting your fitness goals or having alerts.

watchOS 2 also changes the Settings glance in a couples ways. Apple Watch now displays a cloud icon when connected to known Wi-Fi but not a paired iPhone as it still has some functionality but not all. Because watchOS 2 apps can do more without iPhone when on Wi-Fi compared to watchOS 1 apps, it’s useful to know when you’re connected to the Internet. There’s also an AirPlay button that sits next to the Find iPhone button, although in my experience it’s only been used for switching between paired Bluetooth headphones and speakers rather than actually streaming to AirPlay speakers. watchOS 2 also changes the shape of passcode key sizes. watchOS 1 used oval-shaped keys that looked better to me but offered smaller tap targets for any already small display. The passcode screen now users larger rectangular keys that look boxier but may be easier to use.

watchOS 2 catches up with iOS’s Activation Lock feature. You associate your Apple ID and password with your Apple Watch preventing others from using it for anything more than parts if stolen. This greatly deters theft as thieves have little incentive to steal Activation Locked Apple Watches. Apple Pay setup is also easier with iOS 9 and watchOS 2. The process used to be completely separate, requiring you to set up each card individually on iPhone and iPad. Because Apple Watch requires iPhone, the software update considers this and lets you share these settings between devices when setting up Apple Pay. 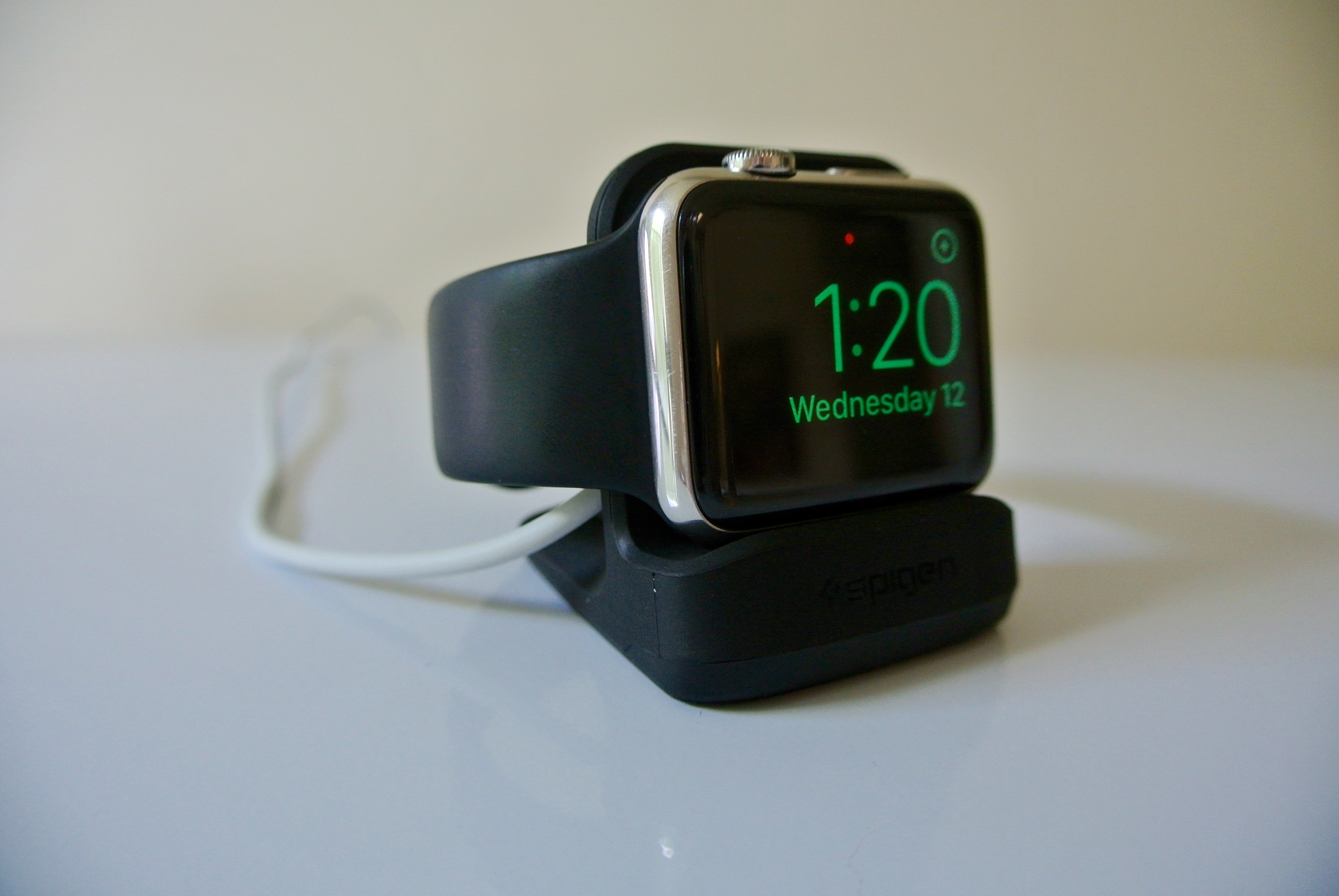 This last one is a favorite among early watchOS 2 testers: Nightstand Mode. Charging Apple Watch on its side with the Digital Crown and side button facing up puts it in an alarm clock mode. Tapping the display shows the current time, date, and any alarms set directly on Apple Watch. The Digital Crown and side button even double as snooze and dismiss buttons. You can pull this off without a dock using just the charging cable that comes with Apple Watch, or use a dock designed with Nightstand Mode in mind like Spigen’s super affordable S350 Nightstand Dock seen above.

While no single watchOS 2 feature or change is likely to send anyone running to fork over $350 or more for an Apple Watch if they already weren’t curious, watchOS 2 as a whole does create an overall better experience for first-generation Apple Watch customers. Where watchOS 1.0 had glaring omissions likely due to development time, watchOS 2 takes a big step forward toward completing Apple Watch 1.0 as a product.

You’re not gaining major new features that would require new hardware like cameras or faster chips, but current Apple Watch users should notice refinements throughout the experience that come welcomed.