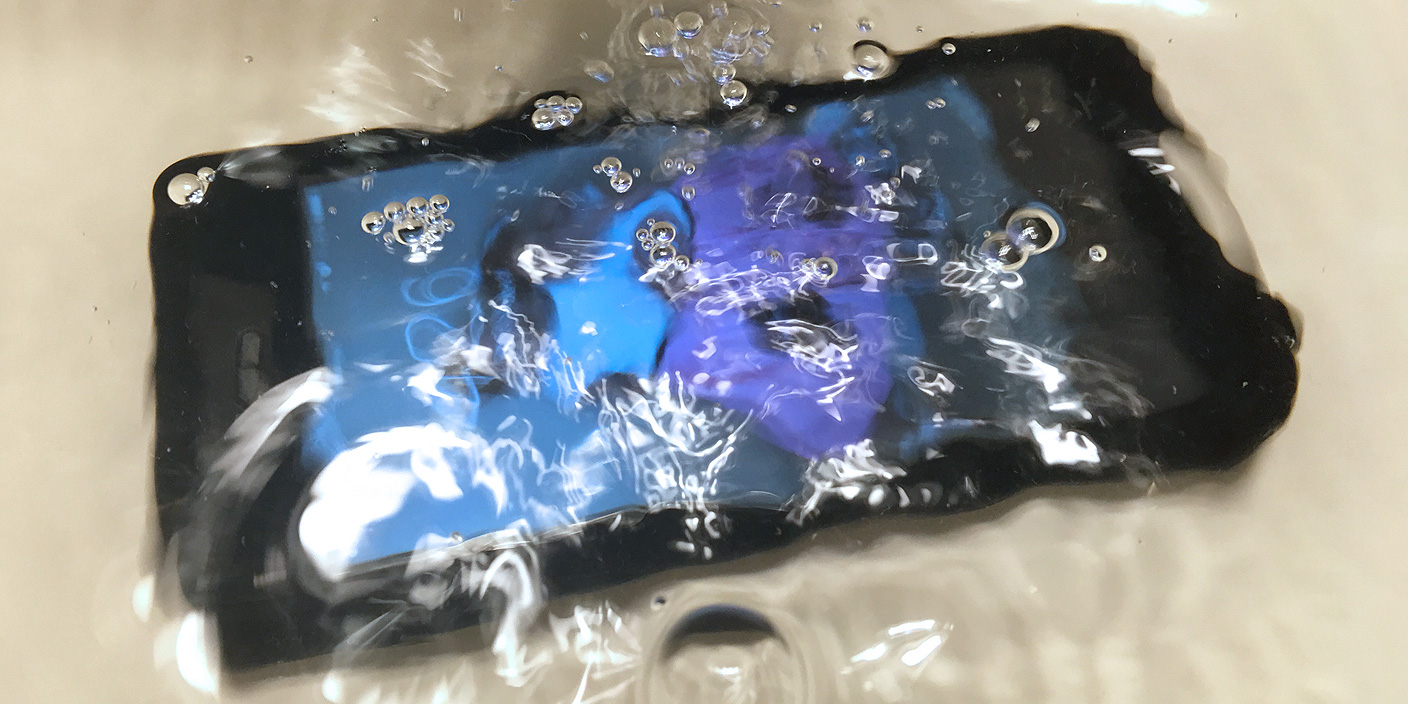 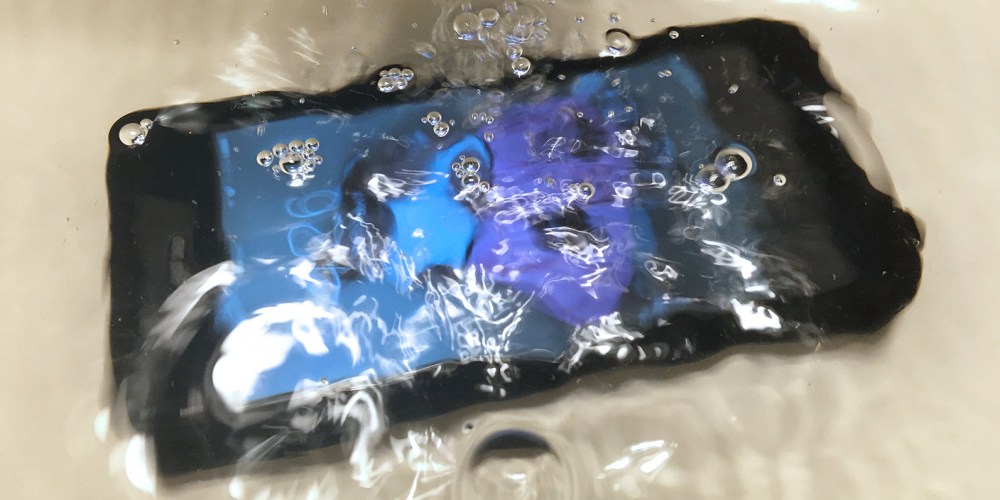 Both of these cases promise military-spec drop protection, but they have different strengths: the power experts at Mophie promise better battery life, while the drop and waterproofing experts at Lifeproof promise better protection. H2Pro has a 2,750mAh battery versus Fre Power’s 2,600mAh battery, and Fre Power guarantees 2 meters of drop or water submersion survival, versus H2Pro’s 1.2 meter protection. Here’s what I found when testing the H2Pro… 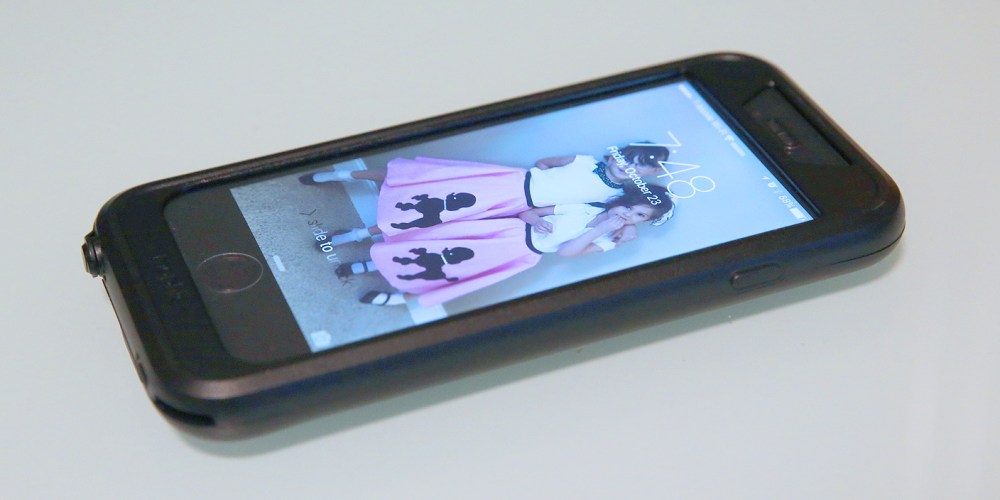 Juice Pack H2Pro isn’t much bigger than a non-waterproof iPhone 6 battery case, thanks to the typical Mophie millimeter-conscious design I’ve come to appreciate in many prior Juice Pack cases. Roughly 6″ tall by 2.9″ wide by under 0.7″ thick at its largest points, H2Pro combines the ease of installation LifeProof has guaranteed in its waterproof cases — there’s a front frame and a back frame, nothing more — with the clean lines and soft curves of a typical Juice Pack. The iPhone 6’s side buttons and switch are covered, but totally usable thanks to nicely integrated protectors, while the phone’s ports are covered with pop-open rubber caps that need to be put back in place to guarantee a completely watertight seal. 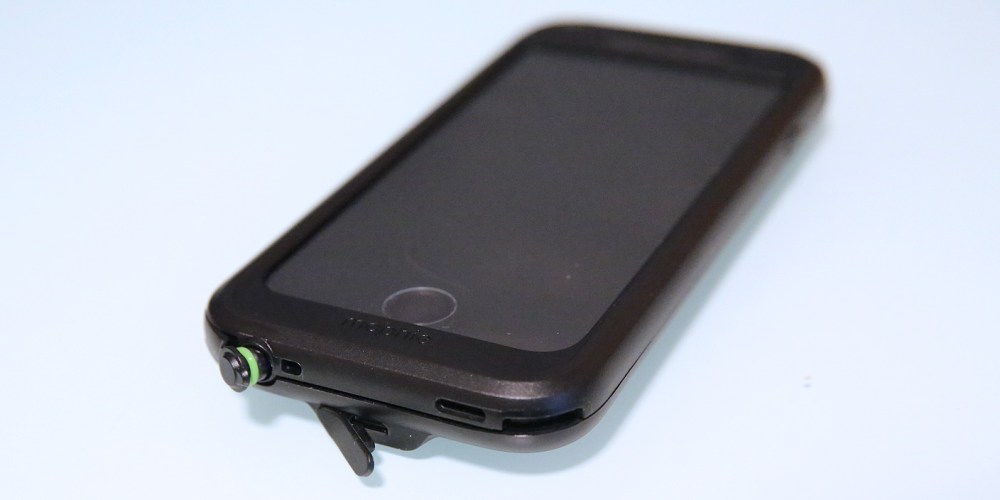 Worth noting: I tested the Juice Pack H2Pro with the original iPhone 6. Since the iPhone 6s is a little larger than the 6, makers of tight, form-fitting cases aren’t necessarily guaranteeing that their products will fit the newer iPhone, and Mophie hasn’t made any assurances with the H2Pro. The sled inside the back frame is tight enough that the iPhone 6s might have an issue squeezing in. 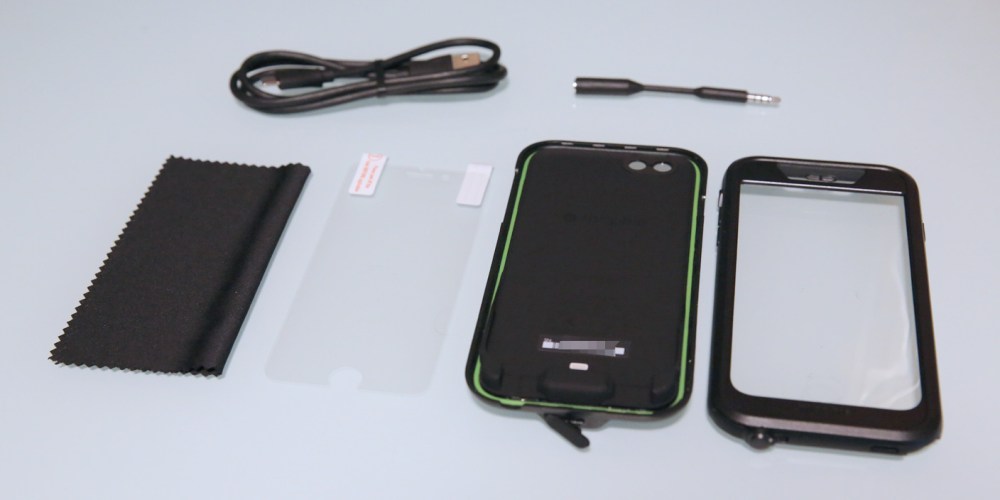 You can choose from jet black, blue and white, pink and gray, or white and gray color schemes, each with clear plastic protectors on the screen, cameras, and LED flash. A Home Button cover continues to work with Touch ID fingerprint scans, and Mophie includes a second screen protector to enhance the screen performance of the iPhone 6 while inside or outside the case; it works reasonably well without the second piece of film. A cleaning cloth, micro-USB charging cable, and headphone port extender cable are also included, though ultra-thin 3.5mm headphone plugs (such as Apple’s) could work without the adapter. 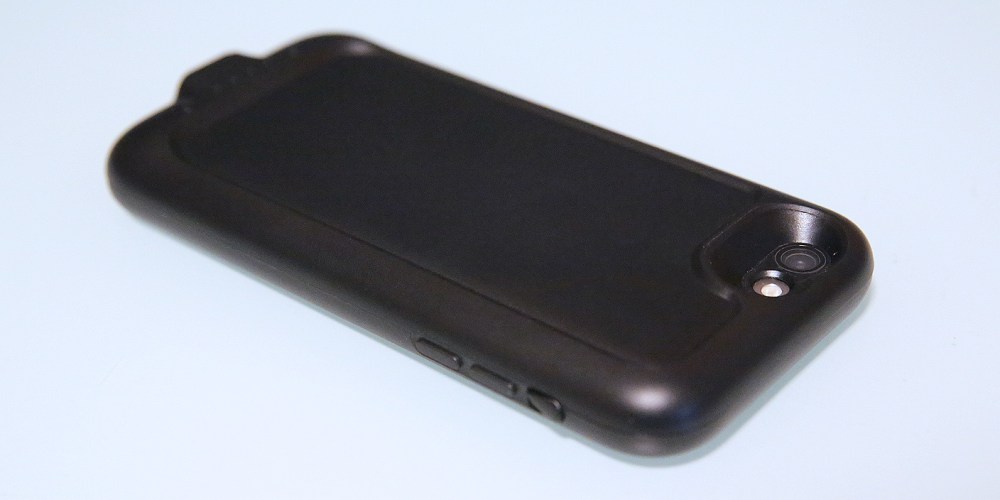 I was partially surprised by how the iPhone 6 worked as a phone while inside H2Pro. It’s no shock that the speakers’ volume level is reduced somewhat by the watertight enclosure, such that speakerphone and handheld phone calls are both a little quieter than they would be with a bare iPhone 6. Compromised outgoing audio is fairly common in watertight cases. But having noticed some complaints online about muffled audio on the other side of calls — alleged problems with microphone pass-through — I tested specifically for this issue and asked my caller how I sounded on the other end. After a very brief period of audio level adjustment, she said, I sounded normal. So don’t expect sonic perfection, but by waterproof case standards, H2Pro does just fine. 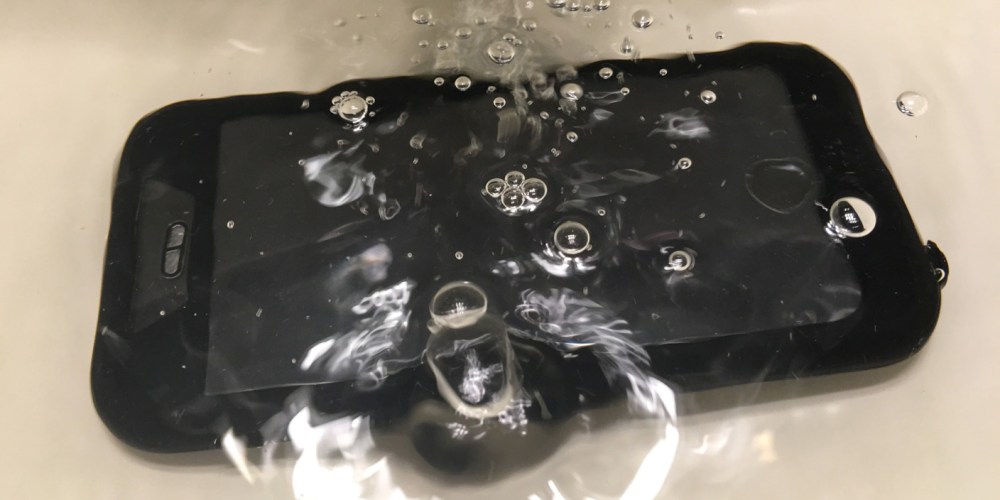 Rated IP68 “against the invasion of dust, foreign objects and water immersion up to 1.2m for 30 minutes,” H2Pro also passed an indoor water submersion test on my side without any evident moisture intrusion. The case has a brightly colored O-ring on its rear frame’s inner edges, and not a drop of water made it past the O-ring into the case’s core, where the iPhone 6 rests against a Lightning connector for charging. I would feel very comfortable taking an iPhone 6 inside H2Pro to my favorite local testing spot, Niagara Falls, if the weather was a bit warmer than it is near the end of October. 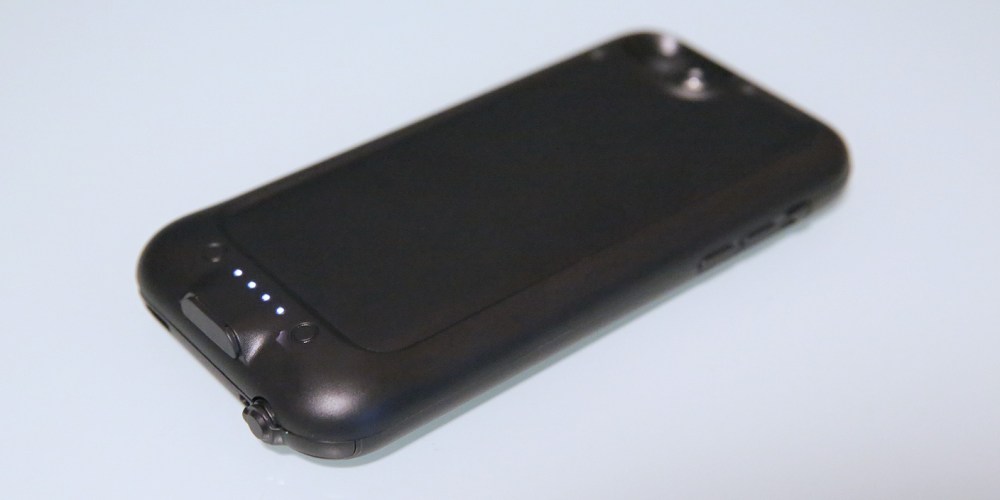 From a battery performance perspective, H2Pro is solid. I was able to more than completely refill the iPhone 6 with H2Pro’s integrated 2,750mAh battery, achieving a 109% total recharge. That involved bringing a completely dead iPhone 6 up to 100%, then an additional 9% when the device was partially discharged. This is better than the “100% extra battery” Mophie promises, and in line with what I’d expect from a battery of this capacity given the performance of other iPhone 6 battery cases. My only small charging-related gripe is the two-button power/remaining power indicator system: neither button is labeled, so you need to learn which activates the case’s battery, versus which shows you the remaining power using four white LED lights. 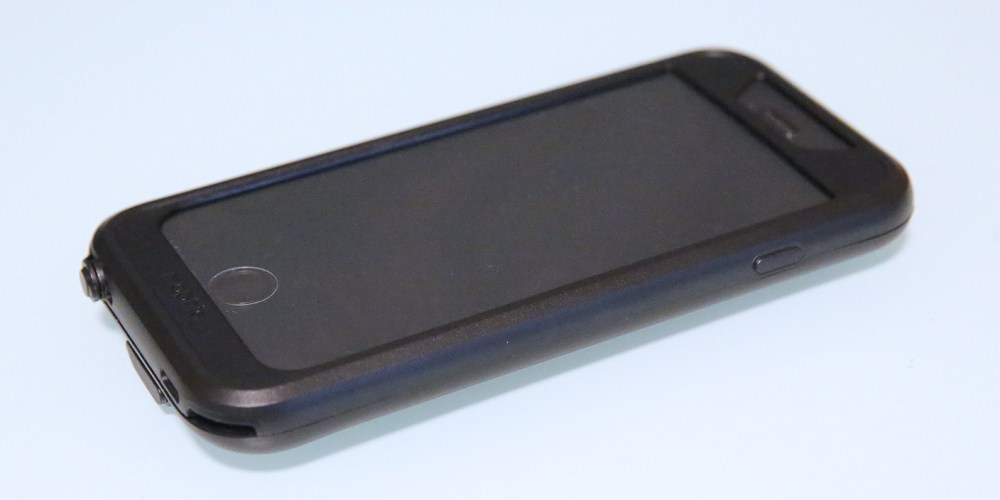 Would I recommend H2Pro? Well, it does what it promises to do: it’s waterproof and delivers (more than) a complete battery recharge to the iPhone 6 inside. Additionally, it’s easy to open and close, which I don’t take for granted with waterproof iPhone cases. Expect to compromise a little on sonic performance once your iPhone’s sealed in, but that’s no huge surprise given how most waterproof cases work, nor is the price, which includes a waterproofing premium over Mophie’s otherwise comparably-equipped Juice Pack Air. If you really need to combine these features in a single case, there aren’t many other options; lower pricing, bigger drop and waterproof guarantees, and a little less battery life might swing you to LifeProof’s Frē Power, instead.