Apple TV reviews: A step toward reinventing TV, but living room not evolved yet 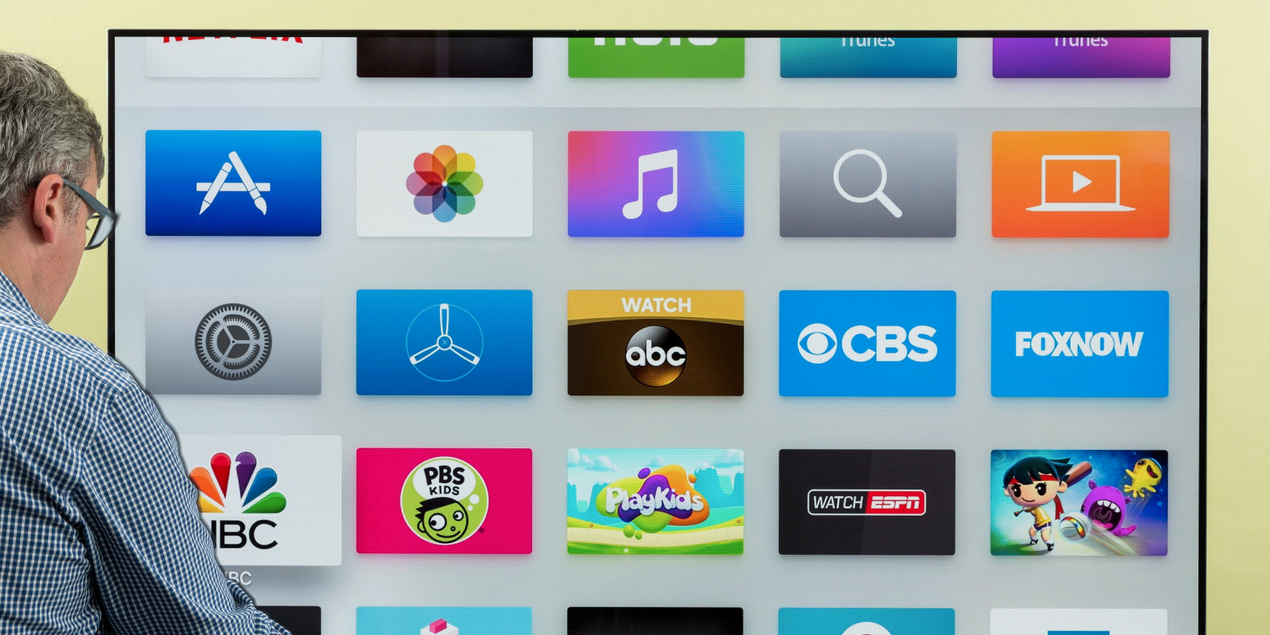 The new Apple TV is slated to go on sale in retail stores this coming Friday after going up online earlier this week, and now early reviews of the device have hit the web. The new Apple TV includes a variety of enhancements, feature additions, and more, including a smarter Siri, a new remote, a redesigned interface, and an App Store. But how do all of these new features add to the overall experience of the device?

Writing for The Wall Street Journal, Geoffrey Fowler says that the fourth-generation Apple TV is very much the company’s attempt at turning “your TV into a giant iPhone.” Ultimately, Fowler believes that the Apple TV’s central advantage is the App Store, which will allow developers to showcase their talents for the everyday streamer:

Ultimately, the Apple TV’s advantage is that it isn’t tied to the idea of channels, live TV or even streaming. It’s the place where developers are able to do the most cool interactive stuff for the widest audience. There’s already a workout show on the Apple TV that’s smart enough to know if you’re really working out.

The TV of the future needs to be as powerful and easy to use as an iPhone, and this Apple TV is the first box—and the first Apple TV—to achieve that.

Walt Mossberg of The Verge writes that one of the biggest flaws of the new Apple TV is that Siri doesn’t work for searching in the App Store, which as it grows, will become increasingly hard to navigate and find what you want.

Another disappointment: Siri search doesn’t work in the App Store, which will soon become incredibly hard to navigate, just like on the iPhone. Even worse, the keyboard you need to use to search for apps (or for content in services not enabled for Siri, or for signing into services) is awful, actually worse than the old one. It’s maddening.

And, as good as Siri has become, it feels limited on this device. It needs to work on allor most of the apps, not a few. It doesn’t even work in the Apple Music app. And it’s odd that it can’t handle all the queries that it can on an iPhone, or speak to you.

Mossberg does note of one neat feature that speeds up the set-up process, however:

Apple does help you with setting up the box, if not its apps. You can just hold an iPhone running the latest iOS version near the Apple TV and it will fetch your iCloud and Wi-Fi settings over Bluetooth.

Nilay Patel, also writing for The Verge, says that most of the apps currently available for the new Apple TV are simply scaled-up iPhone apps. Obviously this is something that can and will change overtime, but in the interim it presents a major problem for Apple’s “future of TV” offering:

And… that is not what the currently available apps in the App Store do. Most of them are just gigantic iPhone apps. The Periscope app seems like it would be brilliant, but lacks the ability to log into your Periscope account, so you can’t see your friends’ streams or leave comments. The Zillow app appears to be an aggressive attempt to highlight the crime-scene aesthetic of most interior real estate photography. Descriptions for featured games like Shadowmatic and Mr. Crabtalk about plugging in headphones and tapping on your screen. Laziness abounds.

If the new Siri Remote isn’t everything Apple claims it is, it’s close. Certainly, it’s a dramatic improvement over its predecessor in function and usability (it’s worth noting that Apple charges $79 for a spare, which is more than half the cost of the base model Apple TV). Siri is a TV remote that actually makes sense. It does what you want it to do with a minimum of fuss and clutter. There’s a touchpad on one side of the remote, and you can use it to navigate in all sorts of ways. Swiping across a film’s timeline to pinpoint a particular moment, for example, is surprisingly accurate and easy. Universal search — which not only enables searches across multiple streaming video services, but prioritizes the results based on the services you subscribe to — is fantastic. After using it for a few hours, I found myself resenting Apple for not enabling it sooner and leaving longtime Apple TV users like me to suffer with the lousy search function that preceded it.

Christina Warren, writing for Mashable, praises Apple’s attempt at reimagining the Apple TV’s operating system and interface with tvOS. Warren notes of the differences between designing for a “six-inch experience and a 10-foot experience,” saying that Apple managed it very well.

Turning on the Apple TV for the first time, I was pleased with the new interface. The old Apple TV interface has received some updates over the years, but has remained fundamentally unchanged since 2010. The new interface shares the same UI and UX cues as iOS 9 and OS X El Capitan. From the font to the images, everything looks modern — yet familiar.

Apple TV now has its own operating system, tvOS, which is based on iOS. The idea behind tvOS is to bring the best aspects of the iPhone and iPad experience to the biggest screen in the house. But tvOS isn’t simply blowing up the iOS experience for a bigger screen. That’s something we’ve seen from other Android-based set-top boxes (including, to a certain extent, Amazon’s Fire TV), and it doesn’t always work as well as you might think. That’s because a six-inch experience and a 10-foot experience are different. The nice thing about the Apple TV and tvOS is that it knows that the experiences are different and the apps are built in a way to make that kind of shift work.

Apple has also included some high quality HD video screensavers for the Apple TV that look unbelievable and are different based on the time of day.

One feature many have been excited for with the new Apple TV is the support for gaming that the added App Store brings. In CNET’s review, David Katzmaier notes that gaming with a single thumb is surprisingly appealing, but that nothing beats the precision an actual controller offers.

The first thing to know about gaming on the Apple TV is that you can always use the included remote; you don’t need to buy a separate controller. The second thing is that with many games, a controller simply works better. Most of the titles I played worked fine with the included touchpad remote, and there’s something to be said about gaming with one thumb. I easily could hold my infant son while I played Crossy Road, for example.

That addictive chicken-smasher, with its simple controls and graphics, played beautifully and looked great on the big screen. So did JetPack Joyride and Bandland, both of which mainly consist of timed jumping. Slightly more complex controls worked well at times, for example steering on Does Not Commute (tapping either side of the pad) or swinging a bat with Beat Sports (swiping to move a bit, and swinging the controller like a Nintendo Wii). Where the touchpad controller failed for me was with quick movements requiring precise directions, like flying the ship in Geometry Wars, or directing the character to move across the map or attack something in Oceanhorn and Transistor.

David Pogue of Yahoo! Tech says that Siri functionality with the new Apple TV works very well with commands relating to finding specific episodes of shows and genres of movies, as well as several useful commands during playback.

Siri can answer any query that incorporates a show or movie title, cast, director, age rating, critical response, or date. (You can even say, “Show me bad movies!”) You can also continue to refine a search. After you’ve said “Show me some Bruce Willis movies,” you can then say, “Only the recent ones,” and then, “Just the funny ones.”

Or “Find action movies,” then “The James Bond ones,” then “just the ones with Sean Connery.”

When a movie or show is available from more than one service—iTunes and Netflix, for example—Apple TV lists them both. And, thoughtfully, it lists Netflix first (because that’s $8 a month, so this particular movie costs nothing more), even though Apple would make more money if you bought that movie from iTunes.

It’s clear that Apple worked its fingers to the bone on this; it works unbelievably well. You have to give a lot of commands before you find a failure. (I finally stumped it when I said, “Show me the episode of ‘The Office’ with guest star Paul Feig.’”)

Finally, the New York Times review of the device explains that while the Apple TV is now more expensive than its competitors (starting at $149), its value will continue to increase as the usefulness of the App Store increases over time:

There are two storage models for the Apple TV. For $149, you get 32 gigabytes; $199 buys 64 gigs. In my tests, apps and games were pretty slim in terms of data size, so 32 gigs should be enough for most people. Those who plan to do a lot of gaming will probably be safer with 64 gigs.

Apple TV is on the path to turning the television set into a smarter connected screen. And though it’s the most expensive of the bunch, it will accrue more value over time as software developers expand its capabilities with more apps and games.

The general consensus among reviewers seems to be that the Apple TV is a great start for Apple in its end-goal of fixing television, but its not entirely there yet. Some of this will get better as the App Store becomes more useful and more developers are able to showcase their skills on the larger-screened platform. The main advantage many seem to think the device has, however, is the integration with Apple’s existing ecosystem. Walt Mossberg writes in his review:

I don’t know when, if ever, Apple will reinvent TV. But this isn’t the moment. I can say that, if I were buying a streaming box right now, this is the one I’d buy, if only for the promise of lots of apps.

By making the set-top box a part of its giant app and services ecosystem, the company is moving Apple TV into a future that’s much broader and bigger than Roku’s or Amazon’s. And that makes the case. In effect, while it may not have reinvented all of TV, Apple has reinvented the streaming set-top box.

The new Apple TV is available now on Apple’s website and will be available Apple Stores to start selling new Apple TV on Friday. The device starts at $149 for 32GB of storage and increases to $199 for 64GB. See also our 9to5Toys roundup of best accessories for the fourth-gen Apple TV.