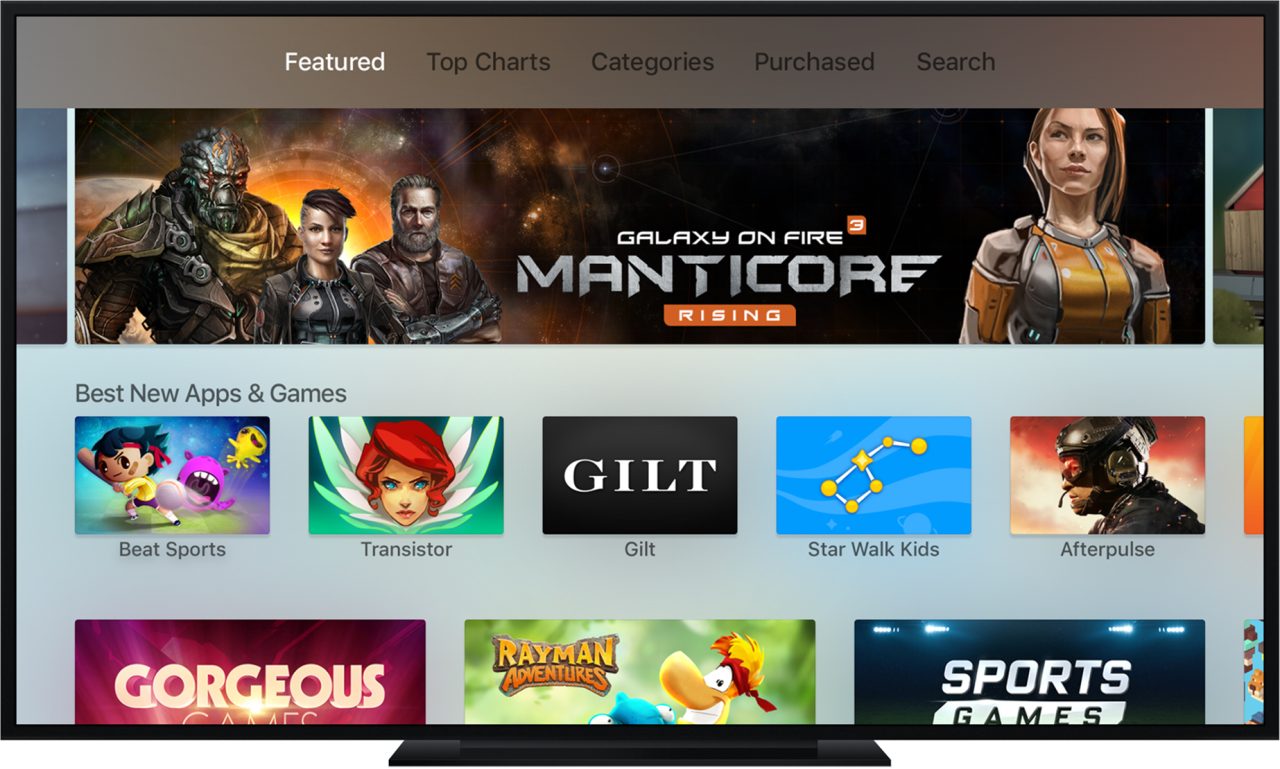 The new Apple TV has been available for three days now, with response to the product generally strong with seemingly good sales, based off some talks with Apple Store employees. A big part of the appeal of Apple TV is the tvOS App Store. What you see above is Apple’s press image for the store: in reality the Top Charts and Categories are currently unaccessible. Developer Steve Troughton-Smith has worked around this by accessing the web chart data directly, by spoofing the Apple TV headers when making the request. He has posted the Apple TV US Top Paid, Top Free and Top Grossing charts as of yesterday. There’s some interesting trends in the data ….

Perhaps unsurprisingly, games dominate both Top Paid and Top Grossing charts with Beat Sports, Galaxy on Fire, Lumino City and Alto’s Adventure achieving high rankings. An outlier is the presence of SimpleX, a third party Plex client, in the #2 position for Top Paid and #5 for Top Grossing. Apple TV owners are clearly itching for a way to use Plex on their devices. Although Plex is releasing an official client, it has not yet been approved so SimpleX is your best option.

Other ‘utility’ apps start to appear in the 10-20 positions, with AirVideo and Carrot Weather featuring as standout successes. On Top Free, there’s a bit more of a contest between the $0 games (like Crossy Road and Rayman) and video apps (like HBO Now, Nat GEO TV, Fox and Netflix) vying for placement.

A big trend is that the pricing on the non-free apps is significantly higher than the iOS equivalents. Pricing in the range of $5-$10 for AAA titles is the norm with very few apps priced at the iPhone App Store trademark 99 cent price point. I’ve listed the top ten paid apps to highlight the current tvOS pricing equilibrium. Only 1 of the Top 10 paid apps (remember, this data is as of sometime yesterday) is priced at $0.99.

That’s how the Apple TV App Store stands right now (remember Troughton-Smith’s data is a snapshot and will not live update).  It will be interesting to see if developers can sustain the higher pricing tiers. The current situation harken back to the 2008 launch of the App Store, when most titles cost $9.99. Obviously, on iPhone, that did not last and apps took the race to the bottom to $0.99 or freemium. Sales characteristics are likely to change significantly once tvOS app discovery is improved.

Without Top Charts or Categories, customers are hard-pressed to find apps and games other than those featured by Apple on the front page. The PR image for the App Store does depict the existence of these pages, so it’s assumed to be coming soon. It may also simply be a case of waiting for more Apple TV apps to enter the market; estimates suggest 1000 tvOS apps are currently on sale.  Having the App Store show more content overall will help even up the balance of power between all apps on the store, which will likely influence pricing as competition increases.