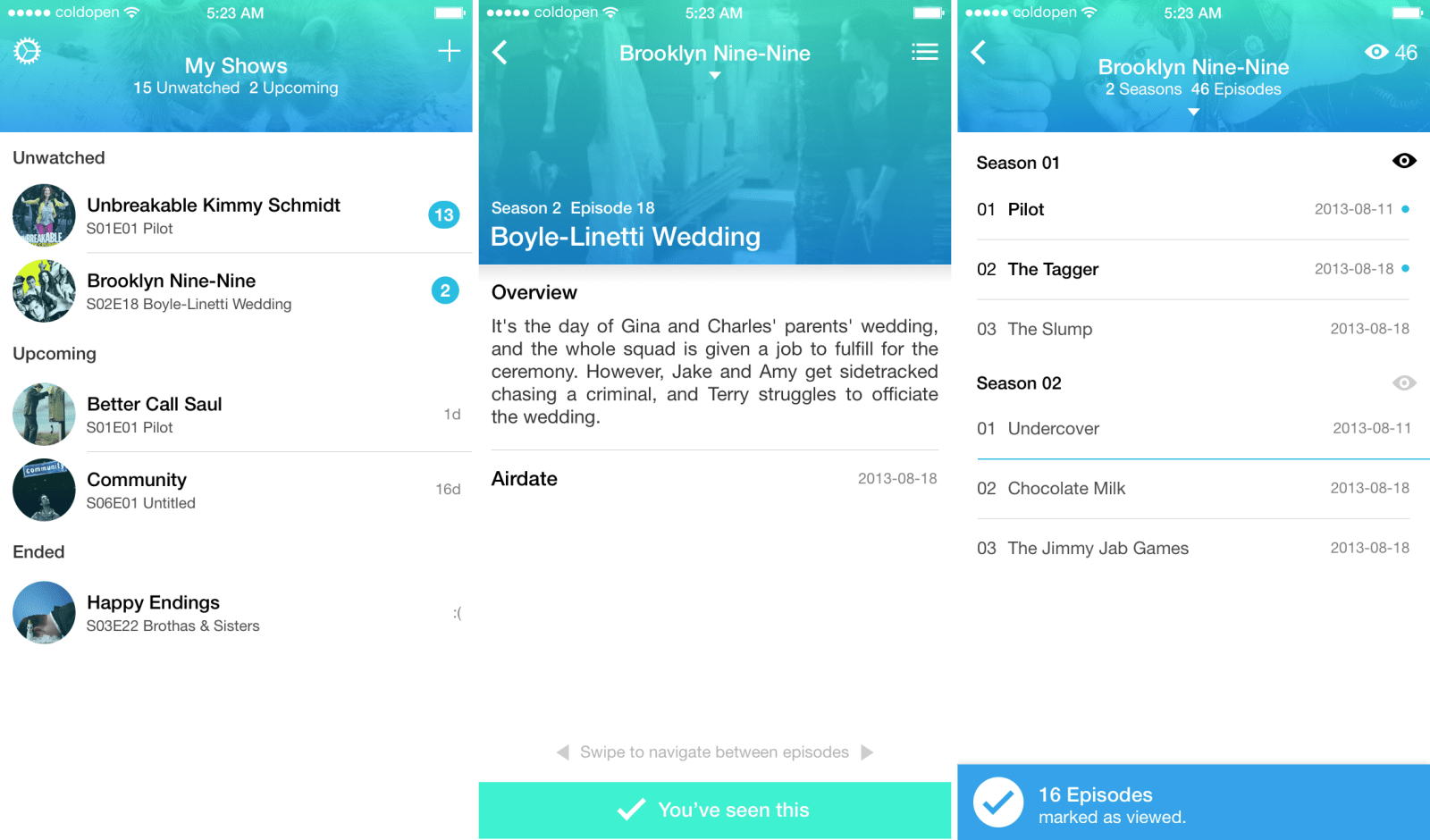 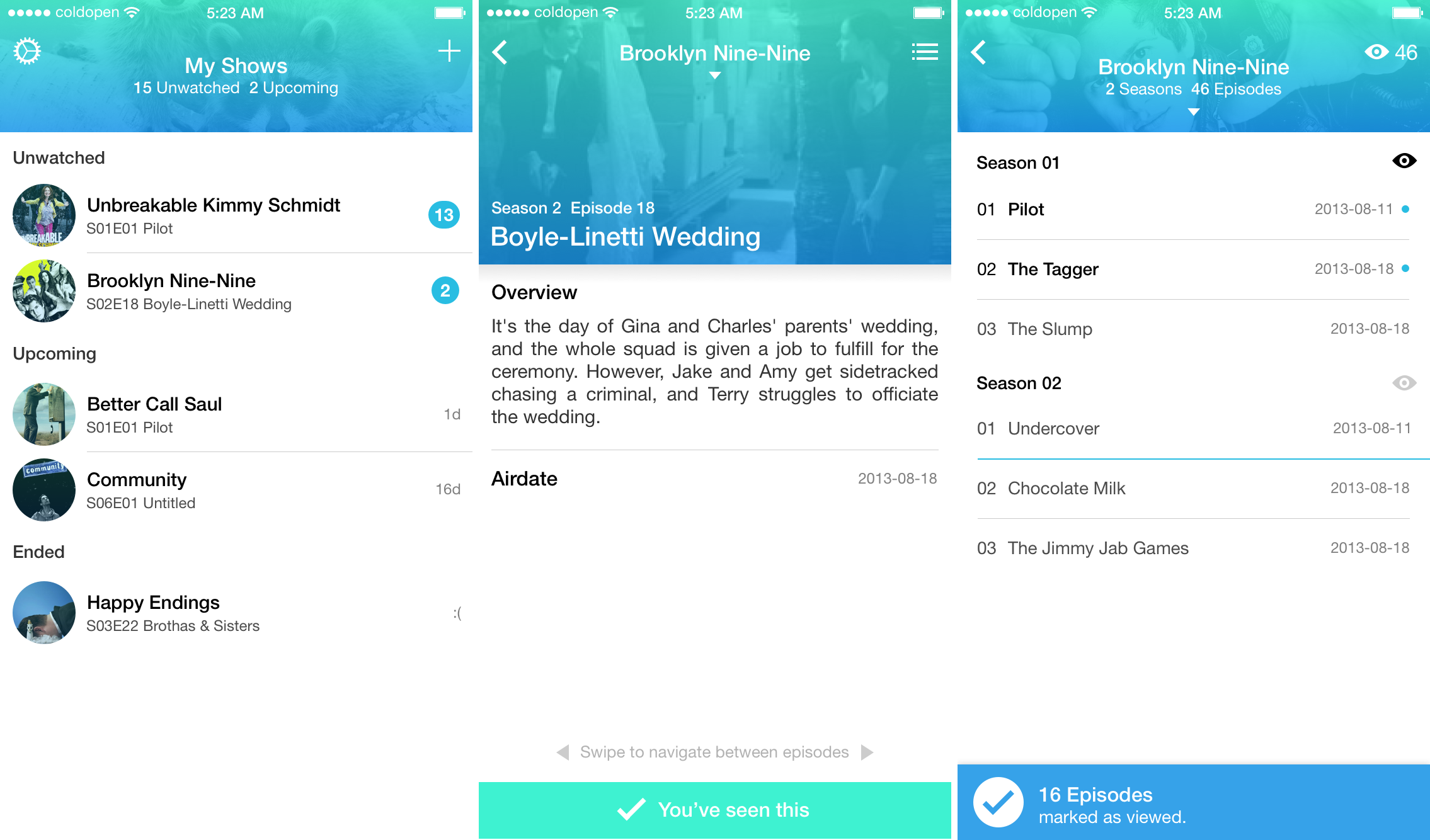 These days, there are so many good TV shows on that it’s difficult to pick just one or two favorites, and on-demand streaming makes it even easier to watch your favorite shows on your own schedule, so it’s no surprise that some people have a hard time keeping track of which shows they’re behind on.

For many, the solution has come in the form of apps that take all of the work out of remembering when your favorite shows air and help you track which episodes you’ve seen or missed. Sometimes, however, these apps can be as complicated as the TV schedule you’re trying to track.

Today, a new app in that category called Cold Open has launched. It was created by a team of developers and designers known in the iOS and jailbreaking communities for their work on a variety of projects, and it’s one of the simplest TV apps yet, making it ridiculously easy to keep track of your watching habits.

Cold Open maintains its simplicity by paring down the number of screens you’ll have to deal with. When managing your library, there are only four possible screens to see: the main list, an episode detail view, an episode list, and a show overview.

The main list does exactly what you’d expect: it lists all of your shows in chronological order. Shows you’ve missed appear in a section at the top and upcoming shows appear in a separate section below that. Other sections for shows that are ongoing but currently on break, or cancelled altogether, also populate this screen if you need them.

Episode management from this screen is as simple as swiping a show from left to right. Doing so will mark the next unseen episode as viewed and rearrange the queue if you’re caught up. Swiping the opposite direction will quickly take you to the episode list. This list is also accessible from a button in the upper right corner of most other screens, and swiping episodes on this list will let you mark them as viewed just like the main screen. A button at the top of the screen will let you mark all episodes as seen or unseen at once.

If you tap on a show with a missed episode or an upcoming episode, you’ll be taken to the detail screen for that installment. This screen includes a piece of key art from the show, an airdate, and a plot synopsis. You can swipe through additional episodes like a deck of cards, or tap a button at the bottom to mark any episode as seen.

Back on the main screen, tapping a show with no upcoming episodes, or tapping the image next to a show’s title, will take you to the show detail view, which contains a broad overview of the premise, genre, number of episodes, cast information, the duration of each show, the broadcast schedule, whether or not the show has been cancelled, and the network you can watch on. There’s also a star rating from other viewers. You can add a show to your library from here, or remove it’s already on your list.

Tapping the plus button in the upper-right corner of the main screen will take you to a page that recommends popular shows based on existing ones in your library or a few stock categories like “Classics” or “New & Returning.” All of these categories and recommendations are based on an engine built by Cold Open’s developers, so you won’t find these exact lists anywhere else.

The Add Show page also lets you search for any show you want to find. Tapping a show from search or from one of the recommended categories will take you to the standard show overview page, where you can view all of the information listed above.

Finally, a settings page is accessible through the main screen. There aren’t actually many settings here, due to the app’s simple nature, but there are a few things you’ll want to see. The top of the page is where you can setup notifications for when your shows air. Two options are available: be notified when your show airs (or, rather, 10 minutes before), or be notified of all shows airing on a given day simultaneously at a time of your choosing.

You can also decide whether IMDB links (from the cast section of the series overview) should open in Safari, Chrome, or the IMDB app. At the bottom, beneath the developer credits, you’ll find an option for removing the two iAds that appear in the app. This in-app purchase costs $1.99.

While Cold Open is intended to be simple and straightforward, there are a few notable missing features that many have come to expect from TV tracking apps. Not to worry, the developers are already hard at work implementing these features, which include a Notification Center widget, an Apple Watch app, and support for 3D Touch gestures.

Unfortunately, version 1.0 won’t import your shows from the Trakt.tv service (or sync them back to it), but that will also be added in a future update. I’ve been told that Trakt is the team’s top priority at the moment. For now, iCloud syncing is available to keep your shows up-to-date between devices and ensure that if you have to restore your phone, you get back all of your data.

In my time using it, Cold Open has quickly become one of my favorite apps in the TV tracking category. It’s one of the easiest to use, and while it may not have every feature that I’d like at the moment, I’ve been using it consistently for quite some time now.

Cold Open is available for free on the App Store right now. As mentioned above, it contains two iAds that can be removed via $1.99 in-app purchase.